I was waiting to go after Giovanni until my other account was ready; but after a few days he came after me. When I turned the game on in the morning he was waiting at the Pokéstop right by my front door.

For having the temerity to chase me, I dispatched him to the nether world and stole his Moltres. Nice swag, too. 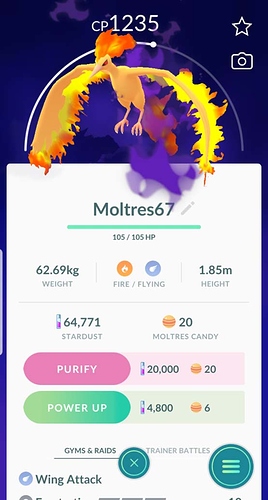 I don’t like them (maybe the phrase is “I hate them”), I’m still without winning any of the three leaders without thinking in Giovanni.

So, congratulations, but I not even been searching for the energy to beat them.

Not sure why you cant win any of the Boss battles @bagguille. I would have thought you have enough adequate counters in your collection.

It wasn’t easy to get, but I finally caught my first shadow legendary from Giovanni! 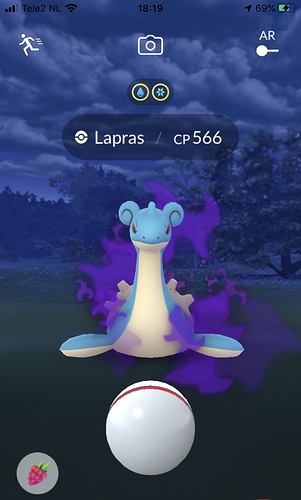 Somehow won from a Lapras-Snorlax-Snorlax Grunt in just two tries without even knowing the second and third Pokémon of the Grunt. Got a Spooky Loch Ness Monster as a reward. The funniest fact is that I got it from my Home Stop.

She’s frustrated because her date stood her up

Got all three birds now. I wonder what will be next…
I was amazed with Giovanni generosity… 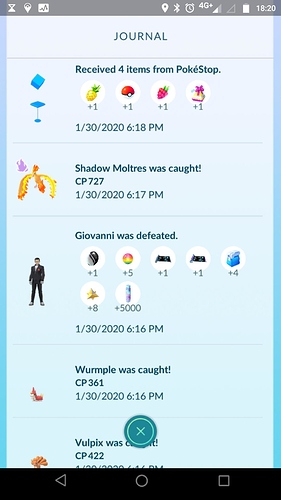 How many balls do you get to catch a bird?

The Beasts will be next no doubt.
I’ve been stocking bats for the cheap purify.

Last time I faced Giovanni, he threw a tough Cloyster at me in the 2nd position, which took 3 tries to beat. Last night his 2nd was Garchomp, instead. After absolutely shredding the Swampert that I used to beat his Cloyster last time, it did the same when I tried my best Kyogre, and again when I tried my best IceShard / IceBeam Glaceon. That Garchomp didn’t fare so well against my top Mamoswine, though, which used the same PowderSnow / Avalanche moves it used to such great effect against dozens of Rayquaqas last August.

Got a nice Moltres for all that trouble: 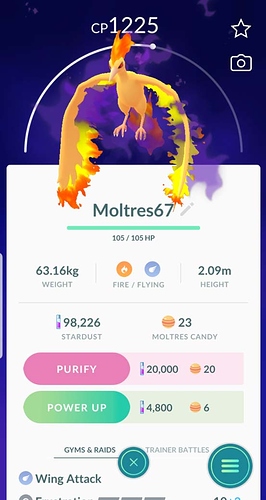 It sounds like that Garchomp had a Dragon moveset, which should me put in a Fairy type like Togekiss or Gardevoir. With Mud Shot it wouldn’t shred your Swampert and Kyogre, so it had to be Dragon Tail. But on the opposite Mamoswine was able to use Garchomps 4x weakness to Ice indeed.

And he’s frustrated because she forgot the time when they were supposed to meet.

this month without waiting for last moment 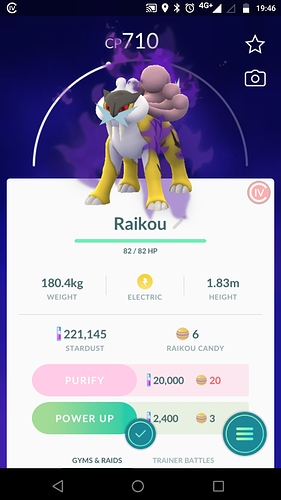 So much time and effort put into doing all the research quests to get the chance only to be rewarded with this Junk. 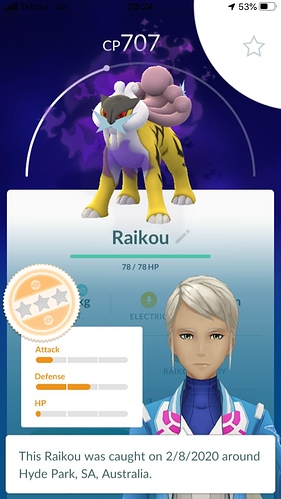 And I got it from my brand new Poke stop! 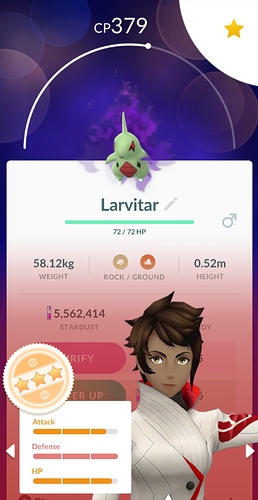 Nice work. 100% when drowned in holly water.
I can’t even get close to a keeper and I’ve done a few of them.
It’s time to start sending some of the growing Shadow Lapras collection into Gyms for trashing upon return.