But I’ll send some pics (perhaps even some AR ones) when I am going.

I have no issues with Go Hub. PoGO has lost a lot of its lustre in recent months, though. Not so much energy or time for playing or posting, but hoping that will swing back sometime soon.

I’m nearly all day at the beach with my wife. From now to october my frecuency here is all day, but lesser time.

Told you I’d run out of jokes

I have hardly been on here the past 2-3 months because I’ve hardly been playing Pokemon GO at all. Niantic’s only continuing to make the game worse and I just can’t like it anymore.

Might your shiny Meltan change that? Maxing out a shiny Mewtwo noticeably improved my feelings about the game.

Just came back to this forum after over a month to complain about how 3 remote raid passes costs 300 Pokecoins now. It’s entirely worthless because you can get the exact same amount of remote raid passes at the exact same price if you buy them as one item. I was quite busy with assignments and have lost quite the motivation to visit this forum, but still play the game as part of regular exercising through walks. 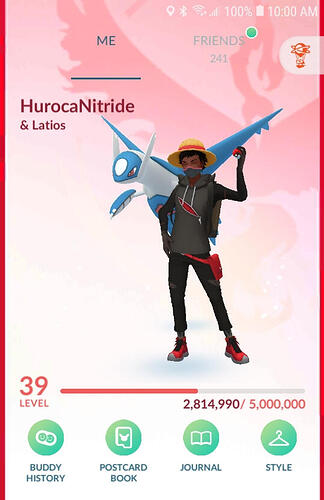 Screenshot_20220621-100040_Pokmon GO (1)540×831 50.6 KB
On this day, three years ago, I began my journey. In 2019, I caught 2 legendaries, each with varying difficulty, I was among the many new trainers around the world to encounter Team GO Rocket for the first time in-game. At first, it was practically effortless. Other kids around my neighborhood would basically be walking out just to discover a Pikachu during July 2019. On July 25, I caught my first Pikachu and donned the straw hat that hasn’t been changed since. In 2020, I participated in my first Go Fest. I registered many new Pokedex entries. On Gastly Community Day 2020, I caught my first shiny Gastly. In September, I got to experience Mega Evolution for the first time. I even managed to turn gastly into a level 40 Gengar that is capable of Mega Evolving. In 2021, I caught 15 legendaries (most of them were repeats). I did mostly mega raids to obtain mega energy for pokemon. I have done 27 of them, getting mega energy for the following: Charizard, Venasaur, Blastoise, Manectric, Gengar Aerodactyl, Abomasnow, and Steelix (this one was a chore to do). This year, I am now close to Level 40, and hope to get even closer as summer goes on. What I managed to do was gather mega energy for Latios and Houndoom. I finally got 2000 beedrill mega energy (because honestly, I did this during quarantine because I was really bored). Now, I think back on all the fun I’ve had since then, and I realized that it took patience to get to where I am now. But enough about that, I’ve kept you here too long. What I’m trying to say is that I hope to make more memories like this like I did three years ago.
5 Likes
Brobraam June 22, 2022, 10:57am #4150

Been too hot to take my ‘dog’ for a walk. Staying busy indoors.

Maybe it’s for being summer?

I don’t think it’s a summer thing. I’ve had to block stuff like that year around. Not really sure why I keep getting announcements geared towards guys.

Perhaps. Last few months we’ve had less spammers than we had this week. I blocked a few as well

In any case it’s boring, ridiculous, annoying… don’t know what more to say.
More at all looking at the thematic of our web.

I just found this old picture of a very rare Shiny Shadow!

Give me a clue… an unown…

Because the rockruff/Vulpix hybrid will never exist in Pokemon go, I’ll be walking with Eclipse soon.

Caught two shiny deino in a 30 minute time span without buying a ticket. I’m satisfied with that.

The tickets for CD aren’t the same concept as GoFraud ones. In theory has no influence.
The ticket just gives you an IV better than the 0-1 star rubbish CD’s are full of.