I have two, and I`m happy

Better not to ask how many you have controlled or caught

My Community Day was great. I got 7 shinies. First shiny was the 4th Electabuzz that I tapped. Then, 3-4 Electabuzz later another shiny. I got several Electabuzz with good IVs, did the special research. I evolved 4 Electivire and got 1 from the research. I like these extended CDs. 6 hours is enough time to do everything, you don’t need to rush. 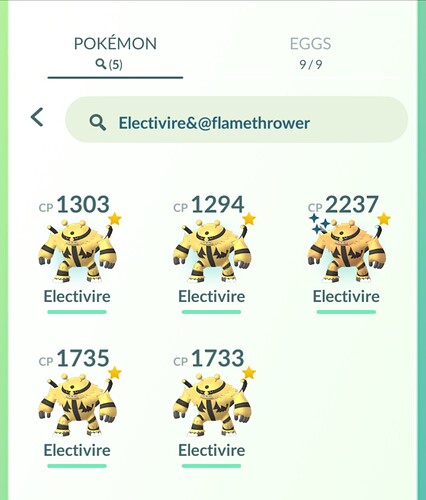 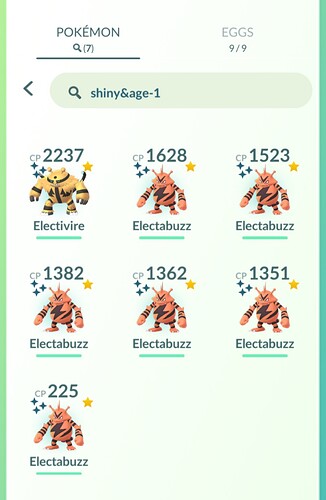 Normally we make screenshots before and after with pokedex counts, but this time didn’t. I remember checking around 1870 in 6 hours with porygon, so must be around that aswell.

It was interesting to say the least. Good shiny catches. There ends the positive side…

It rained the full duration, it was cold and very windy.

Near the end of the event i for attacks by a Border Collie. It bite me just under my knee, full force… (Luckily it wasn’t a big sheppard or Something other big and strong)

What were you doing to get attacked by a Border Collie?

Just passing by. The dog had no aggressive posture or showing anything other than standard hyper goofy collie behavior. But that is most likely the reason. Not enough walking will get them a little snappy.

Forgot to do the “may the odds” thing for this community day.

Anyhow, today was not that bad of a community day. Used just 1 incense and captured everything I got (three hours) and got a nice number of shinies!Even did a lucky trade for that magmortar (then still a magmar) 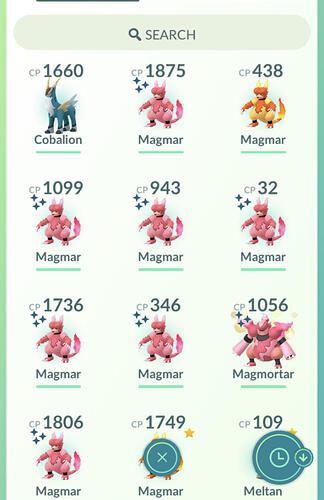 7 shinies for me. About half of what Electabuzz day was.

We were in COVID Lockdown because someone lied about picking up a Pizza from a Pizza Bar when in fact they were working there as a delivery Driver. Don’t ask me explain the difference level if restrictions v lockdown imposed by the Government due to this as its complex.
Anyway CD from home was forced this time as opposed to choice last weekend. Put an insense on at home and the first 2 were Shiny.
Got 4 more in the next 90min and that was enough for me as I didn’t want to smash my ball count to much with no stops for topping up.

I’m not a big fan of Magmar; but I enjoyed the CD a lot.

In 4 hours I caught about 180 on my main and about 200 on my alt, with 13 and 11 shinies, respectively. (Technically 12 on the alt, but one was a Tauros.) With 2 accts going, the spawns came as fast as I could berry and throw. It seemed like the catch rate was much better than usual for Magmar; but if the first throw landed without catching, it almost always fled before the 2nd throw (rather Abra-like). Did both the timed research and the special research, stashing the Elite TM from the special research box for later use.

71 Shiny Magmar out of 2030, which makes my Shiny Magmar rate for the event around 1/29. The best hour for me was between 1pm and 2pm, where I got so many Shinies it started to get unbelievable. Also hatched another two Hundo Magby and a Shiny Magby at the end, which was what I actually was going for. Can’t complain. All Shiny Magmar have poor IV’s, though. 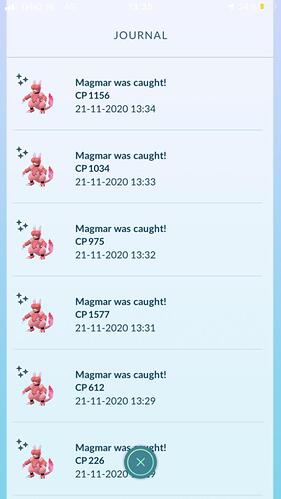 Edit: Just counted, I got 24 Shinies during that one hour only.

It was a great CD. I got 4 shinies which is enough so I didn’t try so hard to find more. I hatched some 12 km and 10 km eggs, did a Terrakion raid, did the special research. Magmar were weather-boosted so I got plenty of high CP and good IV ones. I evolved 4 Magmortar and got one from the research. Because I already had shiny Magby, I was relaxed, didn’t try to get many 2 km eggs. I’ll say this again: I like that CDs now last 6 hours. I wish Niantic would keep it that way.

I’ll say this again: I like that CDs now last 6 hours. I wish Niantic would keep it that way.

When could we have a feebas day