I don’t have much experience in training friendly gyms and was wondering what mons you use to prestige as fast as possible. That is against the most common defenders like:

Could you show me some of your best prestigers with details like CP, moves please.

Outside of the bubblestrat method, I find the fastest prestige (most points accumulated for training session) method to follow is:

Make sure the attackers you choose, beginning with your second thru sixth ALL have a lower CP than your opening attacker.

Using this method accumulates good points, allows me to use mon’s I might otherwise not use and also works against knocking out opposing gyms faster. When facing a gym you want to takeover, it gets better each round as your opening attackers choice gets to increase in CP each time you begin an attack.

This will all change soon, of course. Curious what methods others weigh in with. Cheers!

Thx Skrapz for sharing your method!

Bubblestrat method is new to me. I’ll have a look at that.

Agree with Skrapz on his point. Look for a good/low CP.

Dragonite --> Cloyster/Dewgong
Gyrados --> Jolteon or any pure electric attacker
Vaporean --> anything in range with solar beam
Blissey/Snorlax --> just pray. Blissey is hard as heck to prestige against. I don’t normally even try.
Rhydon --> Vaporeon

@jbaucom is pretty much right, I just want to add something.

Vaporeon - everything with grass attacks

Snorlax - is often not hard to train, it just takes some time
short examples

Blissey - machamp or some strong strong pokemon with similar cp

Expanding the knowledge. “Go lower” is generally good. If all Pokémon in your team are a lower cp then the lowest defender it’s a minimum 500 esteem (well, more. 500 is for the same cp).

No sweat. Glad I could be helpful.

If there is a Blissey towards the bottom of the gym, just use your best Pokemon and go for as many kills as you can. Obviously this won’t be the most prestige per Pokemon but will be probably better than timing out against the Blissey.

If the Blissey is higher in the gym, just Max prestige until you reach the Blissey and then quit.

This tactic is better for conserving potions and revives.

I think Lanturn is one of the best prestigers. Depending on his moveset can easily work his way through Vaporeon, Gyarados and Rhydon

Might be. I’ve only got one in good prestiging range that does not have mixed move sets. I’ll give him a try next time. Lately I’ve been using trash pokemon and transferring after they faint. Saves resources. Not as time efficient though 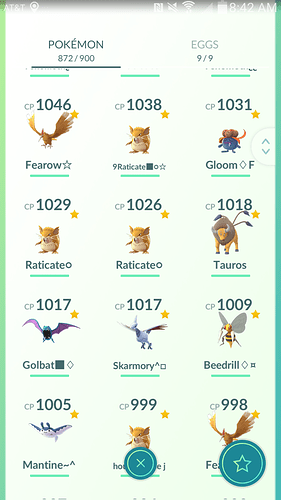 If you want the MAX amount of prestige points (1,000 per Pokémon defeated), your entire team needs to consist of Pokémon with HALF of the CP of the lowest Pokémon in the Gym. You get an additional 1,000 points if you defeat the entire gym.

If you just want good prestige points, everyone has said it: use Pokémon with CP lower than the Pokémon in the gym.

Basically, the lower the CP the more points you’ll get but the max point you’ll get per one Pokémon defeated is 1,000 do it wouldn’t really make sense to try to use a 500 CP attacker against a 2,000 CP defender. A 1,000 CP attack would (generally) do more damage and have more stamina, while also taking the Pokémon down quicker and get you the same amount of prestige points.

***This list is typically with dodging. Some, you don’t necessarily have to. I typically like using a quick move where I can get 3-4 attacks in before dodging (sometimes I only dodge the defenders charge moves) because other moves take so much time that I can only get 1 attack in before dodging when the 3-4 quick attacks can do more damage but still give me felixibility to when I want to dodge. I also go for a big, single bar charge move because charge moves are typically slow so I would rather take 1-2 hits during my one, large charge move instead of taking 1-2 per frequency of other double or more bar charge moves.

• Against Snorlax: anything with high DPS (damage per second) and STAB (same type advantage bonus). So like Dragonite with dragon breath/dragon pulse or Gengar with shadow claw/shadow ball or Alakazam with confusion/future sight. I found that using a high DPS Pokémon with half CP is simpler than using a fighting type with half CP (but then again, I don’t have a machamp with low CP so this could be a factor in my decision). So this is to get the max prestige points against a Snorlax

• Against Blissey: my experience with prestiging against Blissey, you will never get max prestige with Blissey. So again, the lower the better, but I typically just stick to barely lower. I always use machamp with both fighting type moves (preferably with the charge move close combat - but I don’t have one

I have karate chop/cross chop…) i generally have a couple machamp just in case one faints because I would rather have a faint than for time to run out. But it’s doable with just one with the right dodging. But I generally just attack and dodge charge moves only. The only exception to that is if the Blissey has a phychic move as its quick move, (which is another reason I have a second machamp) then I dodge every other quick move or so but since machamp is weak to phychic type moves, it’s hard to keep it from fainting and timing out at the same time.

Another prestiger I don’t use very often against Blissey but has done well is Rhydon with STAB movesets. Since it’s resistant to normal type moves and takes regular damage from phychic type moves, it’s a good contender. Still not a max point prestiger for Blissey but with the rock event going on, I figured I’d include him lol

Thx a lot for your reply. Very helpfull. I’ll try things out soon.

I agree with Emily’s whole post. Well said. For good guys at max prestiging, try fairies and other big health options too.

Thanks for the detailed explanation, this helps a lot!

I have a 1400 lapras that is great for dragonites…problem is I only have one. My other lapras is 1700 and is also good, but it’s just a little too high to be an elite prestiger

I hope to get some decent omastars during the rock event. I have a few dewgong that I need to try

Actually, it’s rare to meet someone that plays like I do. Awesome.

For Snorlax and blissey. Nobody goes for this that hasn’t tried it. Rock throw/stone edge golem. Funny enough, hub is the site that first put me on to it (battledex). Go ahead, look it up. They list him as number one against blissey (by general falldown, Snorlax too). Above all the fight tech, and high do options. Throw, edge golem is number one.

And you know what? They are absolutely correct. Just…give it a whirl. Here’s my first note. The speed on throw from last retweaks went way up. Super, duper awesome. Like, a notch down from actual “speed” quick moves, but look at the damage: 12.

It is the fastest freaking move at that damage base, in the game I’m pretty sure.

This translates into train wreck damage. Edge is also proly the fastest big charge move in the game. Responsiveness to stop attacking and dodge is also really, really good.

Finally, mitigation. All but dazzling gleam is not very effective. I realize with Snorlax you need to be careful of heavy slam but the rest you’ll be good on.

Try it out. You can solo a blissey at under cp I guarantee it. Just ignore quicks and dodge charges.

I’ll give this a try. I’ve never tried prestiging this way. Very interesting. Thank you

It’s a minor trade off. Going just under bottom cp makes your dudes much more durable and able to take down large number of defenders in one go. You can also “save” guys on intelligent switching and whatnot.

For the max esteem, though, your pretty much running all your guys to death. So, it can be more item intensive.

But, speed. Also, I’d the gym goes dumb Mon, dumb mon, blissey, or something like that, max esteeming the dumb mons and running from the blissey is the best way to go.

Can someone teach how the bubblestrat method works? Thanks

Here is the most basic way it works (until the gym rework).

First you need to catch level 1 Gastly (usually 11-12 CP) with Astonish as it’s main attack. Then you have to power it up once until it’s level is 24-26 CP.
Secondly you need to catch new Gastly, also level 1, CP 12, with Lick.

Now all you need is 5 more <12 CP Pokemons and you are ready.

Go to a gym.
Take it down.
Put 24-26 CP Gastly with Astonish inside.
Start training.
Choose team like: <12 CP Gastly with Lick and 5 Pokemons with same or lower CP then your Gastly.
Win.
Repeat.

If you did everything correctly you should have won 1000 prestige with that gym battle without any of your Pokemon getting hurt. So you can do it again and again.
Leveling up gym really fast without need for any potions.