A couple of quick salient points:
Very poor shiny rates
My incense was bugged throughout. Almost every spawn instantly disappeared when clicked on.
Hardly any Pikachu/ unown/ axew spawns - getting a shiny was extremely improbable
Mrs. celery spawned a shiny axew from incense in the first hour. Golden rasp, ultra ball, great curveball… it FLED after escaping the first ball. She is so disappointed it now seems likely she will QUIT THE GAME FOR GOOD.

I know a lot of people who were on the verge of abandoning the game - I think this may be the tipping point for many. Sadly I think it’s possible we’ll never see another GoFest let alone get a chance to complete our ‘dexes.

Oh yeah, I even forgot about that. Incense was totally bugged. I’m guessing the Axew fled because it was gone on the map already. I did not know about this glitch before but I’ve heard multiple people report this today. My Incense didn’t spawn Pokemon automatically at all, I first had to tap on the previously incensed Pokémon and then after like half a minute it’d spawn another Pokémon. In total it took like 1 minute and 15 seconds per spawn and that was only if I didn’t forget to click. This GO Fest event was poorly done. They better come with an actual make up event this time because I don’t think people will agree on this one. They’ll probably not listen, though. They should have already done that two years ago, yet still nothing.

If the same thing is happening in the U.S as happened in Asia and Europe the proverbial **** will really hit the fan.

It’s only when the denizens of the SF bay area get stuffed that Niantic bothers to compensate anyone.

I noticed the now you see it, click no Pokémon Incense bug as well but just put it down to the same bug that has Pokémon reappearing after you’ve caught them. I was letting the GoPlus do a lot of work so probably didn’t notice it to be a worse problem than it was.
I spent a lot of time driving the 3 towns I played in looking for Axew Raids and came up very short of what I was hoping for. Luckily I had a friend back in the City that tripled my tally with invites.
It’s really disappointing that Nianshit can stuff this up the way they do with little to no consequences. The fact that so many keep playing and paying some of the $$$ they do is not really driving them to do better.
I think they know they have the playing community stuck between a rock and a hard place. If players walk away in mass and the games revenue nose dives they will just turn the game off and say it’s run it course.

Remember when the first GoFests were played in a Zone/Park/Area where you had to be there in person to play. Those that were lucky enough to be able to get to the location and play told stories of how great it was with all the good things they caught making all those that couldn’t attend envious.
Now it’s basically the opposite. Those that were stupid enough to pay and play are envious of those that saved their $$$ and gave it a miss

Well, I was dubious if I had taken the right decision, but now, after NOT buying the ticket and after all your comments, I’m happy.

This “Adventure Week” is ending, and I FINALLY got a Tyrunt and an Amaura. One, each, good grief.

I would attach an emoji that’s sticking its tongue out at Niantic; but that emoji looks almost like it’s laughing. While I’m not really ANGRY (like at the quality of life rollbacks), I’m certainly not laughing…

Shiny Meltan is back for the TCG event!

But not for me… 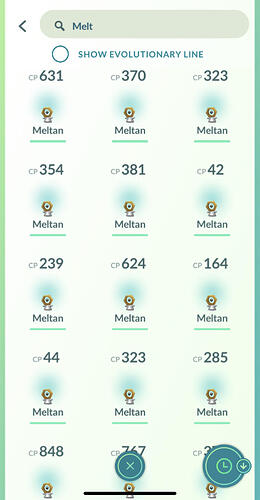 It has a boosted shiny rate - I know this because during the last event Mrs. celery opened 1 box and got 3 shinies, whilst the cat opened 1 box for 4 shinies. I’ve heard them quietly laughing at me…
I have become a figure of fun.

I see the shinys like COVID… I’m lucky not to find them.

I’ve been slack not playing my Switch for months to get up to the stage where I can get my Meltan boxes again. If I was thinking I should have got my daughter to bring her switch on the weekends I have her but I think all her games are packed away in a storage unit so that doesn’t work

It may just have saved me a similar issue that @celery had re: Shiny as previous availability came up similarly poor or no returns.

Just ran the only Meltan box I was able to get and I didn’t even get a 3* Meltan.

Well that was an hour wasted. At least I got over 200 Candy XL but that is quite worthless if I can’t even get a decent IV Meltan at all.

At least I got over 200 Candy XL but that is quite worthless if I can’t even get a decent IV Meltan at all.

Yup. It’s not like you can re-roll the low IVs by trading them…

If I never see a Kanto starter again it will be too soon.

Think of the XL Candy for an Army of L50 attackers

Running out of time to get one.
So many XL’s waiting to be used.

Nope. Just finished catching all the meltan in the last box I can open. Still no shiny. Ugh

So apparently if you move PokéStops they can only be moved within a certain radius. That is just absolutely stupid because I have a Pokestop of which the location is just completely wrong, but now no other Wayspots in its Cell can become Wayspots so I wanted to move the stop to its correct location but I’m unable to so because of this weird restriction.