Looking At Spoofing Over The Last Year

Now, the purpose of this is merely to express the opinions and truth about the entire Pokémon Go spoofing/botting community. I will talk about the pro’s and cons, it’s origins and if it is as big as a problem as many make it out to be.

I will try to be as unbiased as I can, to give you the full run-down of everything that has gone on over the last year.

The Release And Start Of It All:

On July 6th, 2016 a game was released and it sparked a worldwide obsession making over 100 million people run outside for a game. That game was Pokémon Go.

In order to get the game out on time some short-cuts may have been taken by Niantic, the developers of both Pokémon Go and Ingress (more on Ingress later).

These short-cuts and the fact that Niantic wasn’t ready for such huge numbers resulted in numerous issues with servers and a general lack of content. Ultimately, this did push many players away.

Soon after launch, an app downloading platform called TuTuApp (known for releasing hacked versions of games) saw a niche in the game. The game Wasn’t built to stop any 3rd party software from coming online and altering things in the game. This meant that when software like this was released, it became a very popular tool to use. 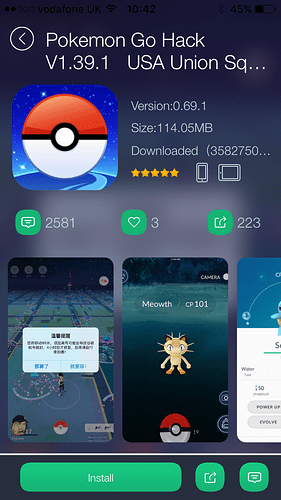 The Clickbait And Cheating

After roughly 48 hours of the games release, a group of 4 YouTubers realised they could make a lot of money by using these apps and using titles like"OMG! SUPER RARE SHINY EGG HATCH POKEMON GO!" and “NEW BEST POKÉMON GO HACK!”

This tactic did work remarkably well, raking in millions of views for people like MasterSaint and FsuAtl. Even regular Pokémon Go YouTubers like Ali-a and Mystic7 did a bit of clickbaiting to have even a slim chance of getting some views.

The main issue wasn’t really the clickbaiting (though it was still a problem), the problem was the promoting of spoofing and botting. They used bots that spawned MewTwo and other tools to show their fanbase. Aside from this, they taught how to gain access to the apps and the art of utilising them. Ultimately, this led to the…

After about a week of playing, people realised how valuable PokeCoins (the in-game currency) were in order to advance. However, the only way to procure them in the game was through the gym system.

This caused the main problem people had with Spoofers, kicking their Pokémon out of gyms and putting up their own instead. They could quickly get back to a gym to reclaim it if taken from them.

Botters used similar things, but their software would automatically fill the gyms up again. So, if one of their gyms got taken it would be theirs again in about one minute.

They used techniques like the BubbleStrat to make this go quicker. The Strategy would involve putting exceptionally weak Pokémon in a gym and using weaker ones to take them down. This would maximise prestige gains and get a gym to level 10 in under 10 minutes (the BubbleStrat has been removed from the game).

All of this pushed many players away from the gym system all together, as high level snipers were too strong to stop forever.

As part of Pokémon Go, you need to get your hands on rare Pokémon like Dragonite, Snorlax, Tyranitar and others.

Spoofers used a method of teleportation called sniping to catch 100’s of rare Pokémon a day.

You would need to teleport to the Pokémon, click on it to enter the capture screen, then teleport back to your initial location.

Sniping was so popular dedicated websites like PokeSniper and PokeZz gave an endless list of coordinates to any Pokémon you could dream of.

In order to combat this, Niantic implemented a Soft-Ban system for changing locations to quickly. You would be unable to catch anything or spin any PokeStops for up to 4 hours.

The system had some flaws. For starters you couldn’t get banned for sniping because, if you went back to your original location while on the capture screen the game believed you hadn’t moved. Also, you could un-ban yourself by doing the 40 glitch. All you needed to do was spin a PokeStop 40 times and you would no longer be banned.

In early April the 40 glitch was removed and sniping was stopped, but not entirely. In order to snipe now you need to wait a great distance between jumps (2-3 hours). This still didn’t change the fact that people had legions of Pokémon, but it was a start.

In the middle of May Niantic announced their first big Pokémon Go event. GoFest in Chicago, Illinois. Due to all the publicity many assumed there would be extreme anti-cheating methods in place. This system was a one time use QR code system. It did work relatively well, but it was still easy to get your hands on them as GoFest attendees were giving them out on livestream the whole day.

To round of the day, you didn’t even need QR codes to gain access to the well publicised legendaries raids. This (along with constant network issues) is why many consider GoFest to be a failure.

There are a few arguments for spoofing to be laid out for you.

Why people are against it

Overall, until Niantic start to focus on these apps people will continue to use them. I would not recommend using them, but it’s all up to you.

Thanks to @ShadowWolf for your input and thanks for sharing your experiences with me.

Here’s what caught my eye:

Other than that, I think the article covers pretty well the concept of Spoofing after 1 year. What I would recommend is that you insert some links to empower your arguments.

Thanks for the comments! I will change the grammar mistakes now. To answer your last point, I tried to write it like a newspaper article so it would be as unbiased as possible. If you want I could insert my views into it but thank you for your feedback

It’s a very interesting article that I’d love to publish on the Hub. Can you fix the errors @Mythical mentioned so it’s ready for publishing?

It’s definitely getting published, will be live in a few hours

Nice to know that a weeks worth of work didn’t go to waste. Thanks again​:grin:

Hehe its very informative. Didnt know Mystic 7 & Ali-A promote the hack app for clickbait ?? Hmmm cheeky!
If he did so its not a nice thing to attack fsuatl innit? He did call out hackers like crazy lol!

Do you have links to those videos by any chance?

Thanks for letting me know

Thanks @JoshHack for the mention

This is Ali-A link: https://m.youtube.com/watch?v=3F9oqeCQ3h0

This is Mystic7 link:

Ali-A did a lot more than Mystic, but these two are the most popular videos.

Awesome! As GO Hub is good friends with both mentioned YT-ers, I’ll use different wording in the article, indicating that there was no cheating promotion included, just sensationalist (clickbait) thumbnails. Is that fine with you?

That’s perfectly fine! I don’t want it to come across like I’m attacking them, especially because I know Mystic reads all these articles.

Thanks man, can’t wait to read it once it’s an official piece😁

I don’t know how many times I have said thank you, but thanks👌

I have just finished reading over it, and really liked the changes you made to the piece. It just flowed a bit better now.