Too easy, 13 accounts beat it in 60 seconds and no doubt most had suboptimal counters.

My first Deoxys. Not too bad. I’m about to do my second one today thanks to a friend’s invite 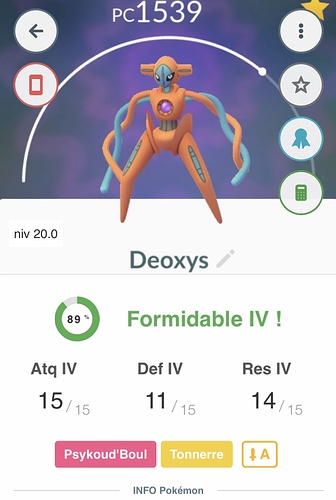 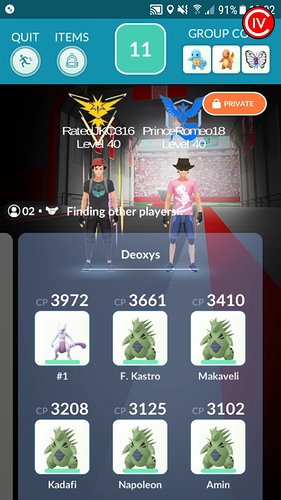 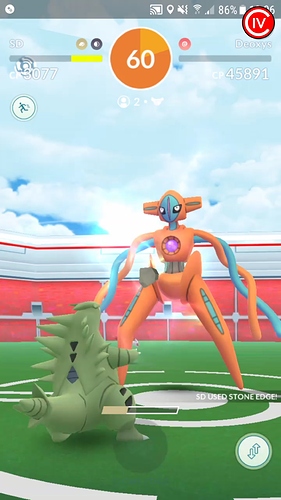 @Pokemon weather boosted deoxys, at the end of battle I got error because of poor network but was able to catch it after restarting

Great job. Nobody will take it down solo, so that mark (2-trainer takedown) will stand unbeaten.

I had the pleasure of seeing two of our regular EX raiders do the same yesterday after my group finished in 10 seconds with 13 trainers. I wonder what was the smallest team to beat a Mew2 raid boss. I think 4 was the smallest I saw.

Did a duo, wasnt the challenge I thought it would be tbh

So a solo will be hard

Solo is impossible I think
Attack is possible, however, and I think it will certainly make for an interesting challenge

Uh huh, normal can not be soloed

@Kingstony, congratulations on the duo, are you mystic or instinct? How many ttar did you use?

Thanks man, Im mystic, had to rejoin, defeated on 1st ttar of 2nd team, I accidently deleted my 2nd battle party so got back in with recommended and it happened to be one of my smack downs however as you can see no harm been done. Deoxys was weather boosted and had psycho boost as charged. A little bit disappointing for it being so weak but at the end of a day was fun and at least most of people have a chance now. I would even suggest it as being closest thing to so praised lucky pass

I got Deoxys too, easy battle with even just 8 trainers, one used Steelix and another one used Rhydon, not effective at all, still beat it with about 100 seconds left.

We had 3 EX raids out of 6 eligible gyms in our area yesterday and as far as I know there been only 3 two man teams and 2 of them were at our raid. Strangely enough none of us 4 received any rare candies, but Id guess its all about rng

Yes, it is all about rng, I hate that when all I received from raid are Grb and healing items, no RC or TM.

This is indeed RNG but can be influenced.

Every ball you get at the end of a raid = 1 ‘box’ of items.
If you get many balls, you’ll get many items. And many items = bigger chance for rare candy or GR

Example: i did a golem raid last weekend, 5 accounts including my GF, which i’m best friends with, also the gym was my color. We did most damage aswell. Total: 18 freaking balls. And those turn into massive amounts of items.

do not underestimate the power of friendship level bonus’, gym color and your counters. If you can get more balls, you’ll get more items. Fighitng with the suggested pokemon teeam can (and most likely will) cost you a ball (or 2) just by damage done. If you have friends in high levels but have group of 20+ attendees at a raid (which happens in my city on newer gyms) joining the team that has that one best friend gives you another 2 balls.Gym your own color, also 2 balls.

Also: higher level raids = more item per ‘box’. If you get 18 balls on a T4 Golem for example you’ll get GR and rare candy in bulk

Not exactly true, I believe its been proven that not every single ball gives “a box” each but nearly every. Anyway I had 18 balls for deoxys, same like the other 3 players, so in 72 raid balls were 0 RC, that has to be a bad day, and all 4 deoxys were total crap, my friend been trolled by 13/13/13.

As I stated: it is RNG, but cán be influenced. Bad streak is always possible (I know all about that)

Sad to hear they were all crap.
It’s the sole reason i’m not really eager to get my own Deoxys. Had no pass this week and don’t care.
For all my time and effort i put into (EX) raiding i get way too low results in IV’s. 32 Mewtwo’s done, all caught. My best is 1 measely 93% 15 att. My girlfriends mother who plays very casually got a 100% on her first mewtwo, which was early 2018. She’s was level 29 back then and is level 30 now…