I think it’s good to have him in EX raids, no matter the stats/moves/forms.

Mewtwo has been out for over a year. Poeple are bored with it. In my own community we have mewtwo’s not being played because of the lack of interest (and the freaking weekdays it takes place on!), but we never had that before.

Change is good, it will keep the interest going on EX raids. Hell, i’ll even take a few hours of from work to do these again with Deoxys.

I also have faith in Niantic when it comes to stats and moves. I seriously don’t believe they will keep it this crappy.

If it gets better Psychic (and even other) fast attacks, it will be the ultimate glass canon in Attack forme
Otherwise its collectors item

i don’t think it’s broken. It has it’s flaws but it’s not broken. If it was broken it wouldn’t work and my 21 caught mewtwo disagree on that.
It sucks if you don’t have an EX gym nearby, and moreso that the raids have to be played in the middle of weekdays where most have to work / go to school.

Also with mewtwo coming to normal raids, it might have taken some players a long time, but they’ll get their mewtwo in the end. (if they don’t even after 5 weeks, they just don’t deserve one)

And if the EX-raids have the different forms it will be fun to battle them. Attack form should be solo-able

It will be in the next cycle of ex raid, according to the notification from the game.

Yes it will be great, thanks @mew1

Not sure if those are the exact stats, think they are.

Speed looks the most balanced but Normal and Attacm are insane

So the Defense form is the hardest, like those regis.

But we arent sure about these stats yet.

Do ypu think it will be good with its stats?

Shame we cant put legendaries and mythicals into gyms (a really, REALLY stupid nonsense)
Otherwise, Deoxys-D would be interesting yet overshadowed by Lugia
No point to use anything other than Attack

I’ll leave it to you guys to work out and analyse the stats.
If I cant use it to battle Gyms and Raids quicker and easier than I can now it’s just a collection item and not a must have the best ones I can get for use Pokemon.

Well you wont. So yeah its a collection item. Unless something drastically changes wich i doubt.

I wont be annoyed and frustrated at not being able to make Ex Raids at unsuitable midweek times then.
After the first few weeks/months this could turn out to be a big flop that fails to hold interest. 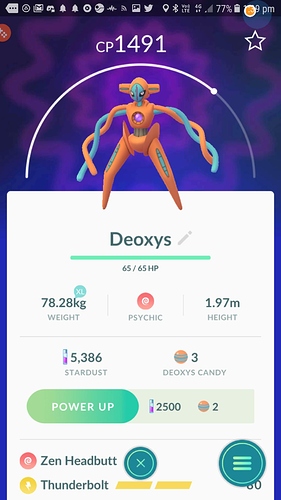 Was it an easy raid?
Will you use it?