Whats your higher dust? whats your current stardust. I’m currently at my highest ever achieved thanks to those two past events.

I’m about the same.

I have heard of some folks in the millions…

Everything above Is spend. The 235k is meant for a good mewtwo to instantly power it up to level 40.

I know players in my group that have millions, One had 6 million like 2 weeks ago and a fellow instinct player just reported a few days back he reached 3 million. And these people just save it, it’s not like the play so much they have that much. They are actually and on purpose saving it.

thats crazy. When i see youtubers with millions i just cant fathom how much they play. Or cough**cought!botted starting to think they hack. Without those events i would of still been round 100K before the events had 200K+ but used most on my 2nd mewtwo but im haply with my 300K

i wouldn’t mind seeing a screenshot of a large amount and your reasoning for saving it and EVEN knowing your highest cp! damn millions must be alot of work…and starpieces.

The answer to this is rather simple: these players don’t spend it,

The guy in my group that has over 6 million only power ups (or evolves) pokemon that are level 28 or higher and legendaries, all with at least 96% IV. As he said: to save dust
Before weatherboosted pokemon, that meant like no pokemon would fit his criteria. Just a few months ago he still did not have a Golem. He had huge gaps in his pokedex.
In return, he has 6 million dust…

Honestly don’t understand that logic at all. I usually save mine up to about 100k and then do a few powerups until I’m back down to 20k. All well and good having 6 million stardust sitting there but if you’ve very few good Pokemon because of it then it’s a waste.

Not really, these players can power up an entire team if a new raid boss requires it

But why not power them up now? Unless there’s a massive shift in the game we know which Pokemon will be useful and to power up. So if you’ve got a good IV just go for it

Because it’s not certain yet which Legendary boss we’ll get next, so they’d rather save their resources until they’re 100% certain and know which counters they should work on.

Sorry for all the extra writing on the screen, this is not only my current Stardust but also my highest Stardust 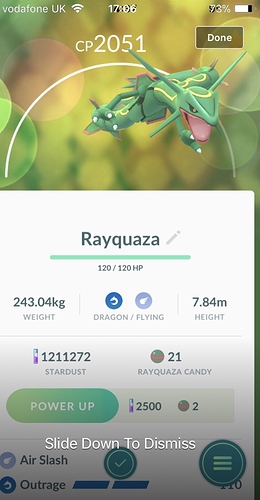 Because they dont know if they will get something better or not?
I have three almost identical Mewtwo, but none of them is trully worth powering up until we get a new EX Boss 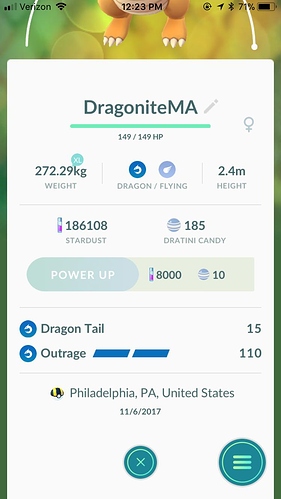 It’s impressive to really save alot. But only powering up 96% iv thats pretty strict.

My highest ever is my current - at around 120k.
I don’t save stardust often enough.

Up until around L36 I used to hardly have much Dust as I would always be Powering things up. I’d build it up to 30-50K then blow it all. I than reached a point where I didn’t really need to do that so stopped and the amount just kept building and before I knew it my Dust amount was around the 400-500K. I’d spend a bit but never let it get below 300K then stopped again as Legendary’s started to appear.
Rather than dump the dust into the first Legendary caught that came along I just let the Dust build in case the perfect 100% was was caught. With Double Dust events that amount got up over 1Mil. It was at that point I decided to make 1Mil my new 0 and only use the Dust in excess of that. It also makes you question before using “do I really need to Power this up”.
When you reach a stage where you have enough good counters for Raiding it get very easy to not spend it until the another Legenday is released than you can build the counters quickly as you have the reserves to do it quickly.

Mine Dust got as high as 1.6Mil at one point then I decided to use a heap Maxing out a 98% Raikou and 100% Entie. I even broke my 1Mil cap rule to finish off a full battle squad of x6 100% Machamps and got down to 800K. I’ve recently built that back up to over 1Mil again while spending a little bit here and there on some Aggrons to make Rayquaza Raids quicker and easier.

I look at my Dust like money in the real world. Some spend every thing they’ve got and either don’t care or constantly worry about how to get more. Then there’s others that save for things then spend it but all the time while they are saving question "do I really want/need to spend this’. I’m in this camp and quite often while in the saving process and questioning the spend a more important issue requiring the funds will surface and I’m grateful I saved it. Hope that makes sense.

I’m at about 1.4 million stardust at the moment, the events got me past 1.5 million but I maxed out a 96% kyogre so I’m working my way back up, I’ve only used stardust on three Pokémon up to this point

I have the same rule, but then for 84%, which might be a bit low. But, instead of powering up something with a low IV, I might as well evolve or catch the same sort of pokemon with maxed CP and slightly lower IV. The even-better-IV pokemon of the same type will come sometime. Just gotta be patient.