This device is not compatible

Hi, i never had any major problems with the game but now the game is almost unplayable, i im getting crashes “pokemon go has stopped working” or this one below, casualy just walking, catching pokemon or even in raids. It started after updating the game [the one before the quests], my device is Xiaomi Mi5s Plus with Snapdragon 821 and Android 7.0 and i never had any problems with the game on this device before. I’ve tried clearing up the app data and uninstalling it but it didn’t helped.
Anyone? :( 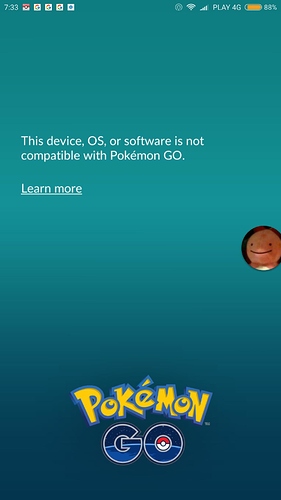 You need a 5s and above to play if on ios

“my device is Xiaomi”…

I’ve had the same issue for the last couple of weeks. I had no issues using one phone, but when my old phone was found and I swapped back to it, I started frequently getting random game crashes, sometimes completely out of the game, sometimes to that “This device is not compatible…” screen.

It has nothing to do with the device, both of the mentioned devices are OnePlus 5Ts running Android 8.0.0, and up to a couple months before that the OnePlus 1 I was using ran it just fine. While it’s running, it runs well until it hits a snag (often at the most inconvenient times, like during a raid or gym battle, and never predictably so) and then the whole thing crashes, therefore it’s not a problem with my device otherwise I wouldn’t be able to play at all. I had thought it was due to some hardware damage on my phone, but all of my other apps run just fine, including maps, fitness tracking apps, and games.

Trying to troubleshoot the problem, I uninstalled and reinstalled PoGO. I had a VERY hard time logging back into the game using all of my connected login methods, and it wasn’t until I did essentially the same thing I have been doing to keep playing the game – close and try to open and login repeatedly until I get through – that I could get back in. This pretty much tells me it’s an issue with server communication.

Same thing man, i have to login sometimes like 5 times to finally successfully login.

I have exactly the same problèm with my galaxy a5 2016… And when sometimes I can play, the game crash and the "this device is not compatible makes a apparence… My girfriend have the same Phone with the same software version and she have no pb ! It’s realy weird… Do like me, send a e-mail to niantic… And if you have a solution, tell us please

A friend has a Samsung J3 and is getting a message that his device is not compatable when he tries to download the latest version.

Has anyone else experienced this? It’s the first I had heard about any unsupported Samsung devices?

I got an iPhone SE back in July of 2016 just because my son wanted to play this game and phone was free with my plan.

This topic was automatically closed after 20 hours. New replies are no longer allowed.