Nope, the Field Research tasks haven’t changed. Only now you have to make 5 Great Curveball Throws in a row to get a Spinda #2. I strongly hope that this task isn’t as uncommon as it was last two months.

A friend has still two of them in his list, because he wasn’t able to do them (old phone - hard to throw accurately). I guess I’ll have to help him with this and then trade one of my Valentine’s Spinda for the #2…

I got a Regice for my 7 day research this morning. Not even strong enough to compete in Great League PvP.

It’ll be good for the tempest cup, with rock smash, blizzard, earthquake

Got Entei, thought he could be over 40IV but ended up at like 32
Wish we would get back to exclusive moves but I guess we just had to get these things at one point or another

That 3 month Regis Raids where only fun because we had Shinx. It would be nice to Niantic to release Raid only catches on Breakthroughs. Maybe Absol and Luxio…

I’m fine with the randomness as I know it suits some players. My issue is with just how LONG we’ve had the Legendary Beasts. They each had their own month, just had two months, and will now get two MORE. That means each one will have been featured in some way for five months. It also means that we’ve had one of them involved in the weekly breakthrough in some fashion for a whopping SEVEN months. That’s kind of overkill. lol

Also, on a personal note, the RNG for this has been pretty bad for me. I have way more of each beast than I have seen of Bronzor, Cranidos, Shieldon, Glameow or Finneon in the wild.

I got a regice, just what I wanted

I know that Absol was hatchable a few days ago, not sure if it still is.

Shinx was released after all Regis ended

Oh, my mistake! It was during Cresselia, right?

Before that I think, it was released during… Mewtwo?
I think it was among the first Gen 4 mons

Can someone help me out I’m trying to figure out if this is worth completing or if I should discard “win 5 raids” & focus on CD’s field research. THANKS 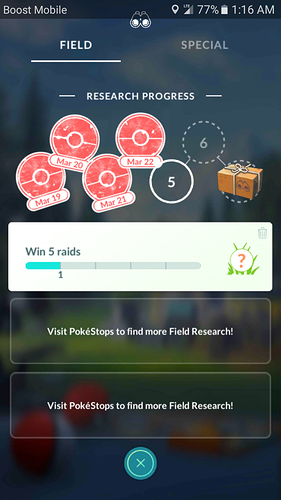 It’s an Aerodactyl. I think you should trash the quest, as ‘Evolve a Pokémon using an Evolution Item’ is way more common and it gives an Aerodactyl, too.

I agree is kind of useless

I didn’t know you could get Raikou from field research break through. I missed him when he came around for raid battles. He’s my favorite.

He is one of my favorites, but got a 100% and a 5 others. I missed Zapdos. So I rather seen the beast go and the birds stay

Raikou is still one of the Legendaries I need a really good one with, and the best I have is a 91% with 13 Attack. I kind of hope Raikou will have a day like the birds do and I’ll hopefully snag a great one there.

Raikou has been available for months.

@Player1_FTW, I agree with @Jormdeworm, the Evolve quest is much easier and faster to complete if you have the proper Pokémon and evolution item