Glitches and compensation from Niantic?

So me and a whole bunch of friends are having loading, freezing, catch rate, fleeing, and sign in issues… and there’s no way to contact an actual person over at niantic. Are they (edited) lazy or just greedy? Anyway…

I’ll start with the loading and sign in issue. Load times since this last forced update have been really bad. Full strength signals and high speed loads, are now taking 10 mins or so… If we can successfully log in that is. After about 3 mins it pops up with the sign out and sign back in which doesn’t help at all. Still very slow. Leading to the next issue, lagging and freezing.

The issue with lagging and freezing is new to me. I am a new player but it just seems horrible and my friends say it wasn’t ever this bad. We’ll go into battles, raids or just to catch wild Pokemon and the lag from throwing to catching, escaping or them fleeing is just, ugh! 80% of the time because of the lag you’ll miss the throw because it’ll veer off, releasing from some random spot on the screen. Then, if that isn’t enough, if you do manage to throw it just right even with the lag, the ball will freeze midair while the Pokemon and surroundings still move around. I’ll upload a screenshot of that. 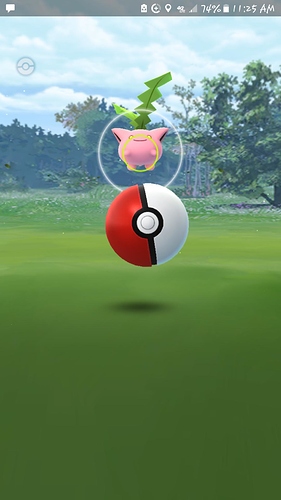 Screenshot_20180715-112544.jpg1080x1920 94.5 KB
This wastes resources on so many levels. Berries, balls. I lost 70 pinap berries that I paid for doing this, 250 pokeballs and 180 ultra balls (the loot box event right now). If the ball does land, the Pokemon will break out seemingly immediately green circle or not, even out of ultra curve balls, and instantly flee.

Anyone else having these issues? Do you think niantic should compensate? I sure do. They made a profit off of me and who knows how many others only to screw them with these issues.

First, you are new so welcome. The Profanity was removed from your post, I don’t expect to see that language used in future postings here.

This game and Niantic both have plenty of flaws but I do not experience those issues you listed on a frequent basis. Most of the problems sound like issues with your cellular carrier or by using an older device that is laggy. When my nephew plays on my tablet (older device) on my cellular hotspot he has the same issues trying to catch Pokémon.

Try to use and internet speed testing app to check how fast your connection is. I find that under 2 megs per second is horrible and 5 mega per second is desireable. Many carriers have flaky coverage outside major cities so there is a chance of Thad being your major problem.

If your device is over 3 years old it is also possible that it is part of the issue too, I saw huge improvements when I upgraded phones.

The Pokémon escaping us part of regular play and as designed. Curve balls and great or excellent throws help and while breakouts and fleeing Pokémon is annoying it’s not deserving of compensation from Niantic.

Oh my god, @Thorend, you are great and very certain. Not all of the problems are from the game, allways you have to take in account your personal problems.

When I play, sometimes I’m angry with myself, because a throw not enters like I want… because in this moment I have a problem with GPS, in this moment the game not has abetter idea than moving the monster…

But anyway, nearly all of us are enjoying the game because of the good moments we live… what’s hell me influence some flaws of the game…

Oops, I forgot about that too. I always get, as well as my friend who is using a samsung galaxy 8 which isnt that old, Network connection error messages and GPS fails. My phone is a Samsung s7 Active so also not that old. We are in a rather large city park with 4/5 to 5/5 bar signal strength when things are the worst. I can have 1/5 bars and its very fast (about 7megs). Thats why I’m thinking its not just a phone or service issue. That… and this entire city community of like 76 people that play together all have similar issues with loading, lag, freeze, and general lost items because of it. shrugs I like the game… when it works.

So is there no way to contact Niantic for fixes and compensation(s) when deemed necessary, other than impersonal Bug reports?

Try to play other AR games like Draconius
Maybe your city has too weak providers?

So, I tried it. Draconius and some other pokemon go similar games that are heavily online dependant like LoL mobile version. They load at 18 megs. Very nicely. I dont think its my phone or provider

Phone that new should not have issues. Have you tried playing in other areas of the city? I know there are often mystery deadzones in my town, spots where internet is slow for no good reason.

I have played hardcore since release and even at gofest where Verizon was reported to have connection issues (I had no issues with Verizon), I had excellent luck. At one point 6 hours into th event I did need to restart my phone but I think it had more to do with 6 hours if continuous use and being charged from a battery rather than a game issue.

The customer service issue is tough, but this is a common practice with large companies. I recommend talking to their reps on twitter as that account is constantly monitored.

Deadzones for me seem randomly placed. I could be walking along my main street and have horrible or no signal, or be walking in the middle of nowhere with perfect 4G

I don’t have a Twitter and I suspect any responsibility they’d shove off to someone else. When it happens to multiple people at the same time in different areas it has to be a glitch or niantic server issue. 43 people in our discord group all freeze, lag out or are forced to sign out simultaneously. Whatever issue happens to occur at that particular time. It’s always one of those 3. And we’re all in different areas. Some are in Gahanna, OH. Reynoldsburg OH, downtown Columbus OH, New Albany OH and even as far out as some boony areas. Same issue, at the exact same time.

Anyways, whatever the issue, I just Filled out a BBB to get it fixed and some compensation for us experiencing the issue. I was just curious if it was anybody else too not in those areas