Hi guys, I just received this: 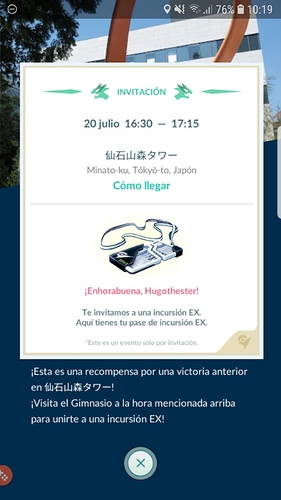 I just read online that it is an Ex Raid invite, and that they usually come in waves, so I guessed the info might be useful to you as well. The area is Tokyo-Japan.

Its not english,so idk what that picture means

Looks like they are making weekly raids. I got one for tomorrow (can´t be there since it´s at 13:00) and a friend received that one (next friday) from another gym. The one i got, nobody of the other have received ex-pass for next week.

it’s been confirmed they have a weekly schedule to release Ex waves for at least half a year now.

Unless something goes wrong (which has happened at least twice) the schedule is easy to follow:

Disclaimer: if Niantic has something big planned on a given day they might change it. Like íf Go Fest would have been a week later, but it isn’t
Also, history has proven that Niantic throws things around at random, so although this SHOULD be the schedule, it can change at any given moment.

Edit: disclaimer on the distribution day: It might be off by 1 day and they still drop on wednesday, but i’m sure the next play time is on saturday. Also timezones…wednesday for 1 might be thursday for another