Apologies if this has been posted before

Is it just me, or does the idea of daily or weekly tasks seem like one of the big things that’s missing from Pokemon Go?

In the same way the 7 day streak gets people to play consistently, having these challenges would really make the game more fun for the casual players, and those in rural areas I think. It would also give the opportunity to get access to items that are hard to come by for a lot of players (TMs for example).

It would also bridge the gap between different generations being released, stop the lull when there’s few Pokemon left to catch.

there is something wrong in your logic IMO. Daily or weekly tasks good for casual and rural players? They are the first ones to complain about not being able to do them / not being fair for them.

I do think it’s a good thing. PoGo has always been about grinding, and that’s it, grind, grind and grind. Giving goals to do would make it more fun. Balancing this around regions and low/dens areas will be hard though.

I think it all depends on what the challenges are. The way I’m looking at it might not be as an advantage for rural players, but more as those who don’t have a large Pokemon Go community in their area. Being able to complete more in the game as a solo player as well as having the option to team up with other would be great.

May not be long now though; 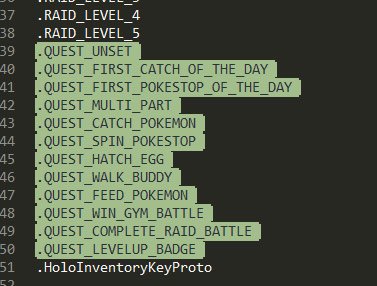 Very excited about this! When do you think it will be live?

The way they’ve been releasing updates that have gone into the code, could be just after the next update or we could be waiting a while again

Personally I don’t really mind if it is a while, I’m happy just grinding XP, trying to catch some shinies & waiting for the next EX raid pass to appear in my Pokébag!