Hi, I have a question regarding Charged TMs.

I used Charged TMs on a Rhydon to change Megahorn and to get Earthquake.
With the first TM it learned Stone Edge, so I used a second TM and the Rhydon learned… Megahorn… then I used a third TM and it learned… Stone Edge… again… I used 3 Chaged TMs and got no Earthquake.

What are the chances to return to a move the Pokémon already had and was supposed to “forget” instead of learning a new one each time you use a Charged TM…?

When you use a charged TM (or any TM) you need to look at the entire list of moves available. It will randomly learn a new move (excluding the one it already has). It just sounds like you had some bad luck on the 50/50 chance.

Some times i use up to 6-7 TM to get desired move;
It worth.

When moveset evolution is implemented in gen 4, you’re going to consume even more TMs.

Edit: It was a 100% Raichu with Thunder Punch ended up with Brick Break…

Wasted 4 Charge TM’s this morning trying to get Close Combat on a Machamp.

But why close combat?!!
He look like best by dps, but if you take calculations from all, — dynamic punch totally overcome, and better chance not to be wasted:

I just went by move set of those that have been able to take down Tyranitar with 2 accounts.
I’ve wondered if I would get more hits in using Dynamic Punch before waiting for Close Combat to charge up. it could be a costly experiment changing them agin that I’m not so keen to jump into quickly after the Dust it cost me for the first fail.

Yep, we hunting it duo too

And my partner too much believe in close combat too

Till now was only attempt on iron tail / fire blast(but near month ago), – surprise worst combination from possible(mostly, because dodge glitches), – look like that one, which i beat with girls, – mostly common for two.
But they(girls), – with dynamic punches too

Thank you for the analysis! Appreciate the explanation! 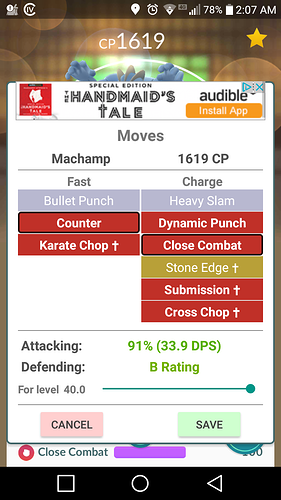 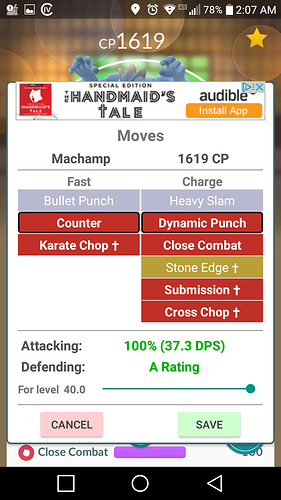 I still struggle to make sence of all the numbers.
I’m smashing ENTEI Raids ATM and getting good drops of Charge TM’s so might have a go at changing them to Dynamic Punch and see if I go any better.

Everything I have read and calculated shows dynamic punch is better, even if it were a wash or slightly weaker , having the ability to use the charge move more frequently allows you to time it against the opponent’s attacks so you can dodge their charge move so it makes it useful.

I’m so confident in it that I have all 6 of my powered Machamp set to that moveset.

Dynamic punch is the best charge move for machamp hands down.

It took me 10 charge TMs to get Wild Charge on my Raikou.
That was fun.

Ok, got plenty of Charge TM’s so I jumped in the deep end changing my 6 Machamps from Close Combat to Dynamic Punch.
The first 5 only took one and the last one 2 so 7 Charge TM’s used to do all 6 was a great result. Just need to find a Tartar Raid to test them on now.