Hey guys, I have a quick question. Considering Niantic’s new ‘requirements’ for EX raid invites, its now important to have the Champion Raid Badge as high as possible. I have been an active raider since the system was first introduced, sometimes completing 3-5 raids a day.
I checked my raid badge, and it says I have only won 63 raids? I am 100% certain that I have done more than that. For example, it says I have completed 70 legendary raids. How can I have only won 63 raids overall, but won 70 legendary raids, unless they are counted separately?

Any help or ideas would be welcome.

They are counted separately, indeed

There is a legendary badge as well as the standard one.

Separate raid badges as below. Keep raiding though!!! 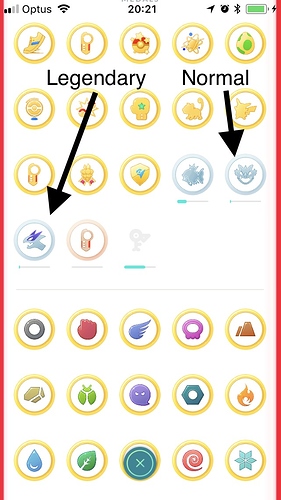 Bit of work to do on the Big Fish Medal I see. @beales.com.
I see you have the Tiny Rat completed, nice work. How many Rats in Total have you caught? I’m catching lots of Rats but not many Tiny ones…

Haha! Silly thing is I work near the Brisbane river & have a water biome near me 5 of 7 days & haven’t really tried to finish the Karl badge…
Only got 330 tiny rattata (11.54% of my total rattata caught) so far but 30 were caught since I got the medal on 26/10.
If you’re trying to get that one, now is the time!

I dont evem have big karp silver lol
Rattata neither