Giovanni wants to see your Latias!

Since I don’t keep anything below my 96% Latias, I’ll post my videos instead: 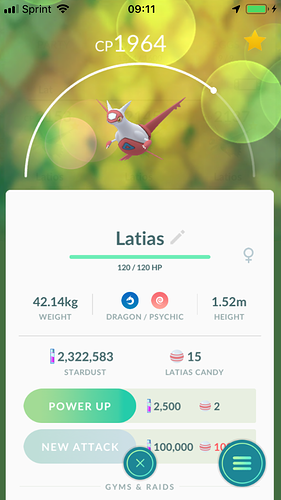 Don’t know why, but not even one other at the raids. The weather was great. But I’m probably away at the wrong gym. I know there is an active raid party here. 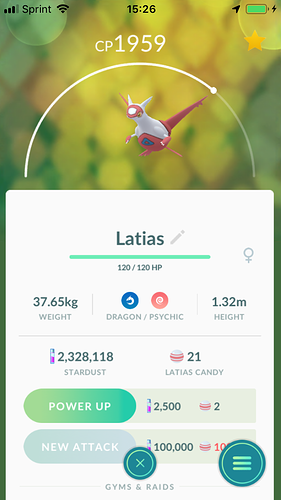 Only reason I Raided one yesterday was to get an Ex Gym done for the week. Got my usual serving of junk Low CP not Shiny. It ran after throwing balls only no wasting Berries.
Saw plenty of other on Gyms before and after but gave them the Bird.
Lots Errors and jump out glitches reported on our Discord by people chasing these. So glad it wasn’t me or I would be very salty.

Reluctantly did 2 of these last night on 2 Gyms close to home I’m not Gold on (deliberately been leaving them for the odd Raid).
Same old no great IV and of course no Shiny.
Did 6 all up for the time it was here on all the family accounts and not one Shiny to be seen 0/24.

My first Latias raid had 4 trainers, who should have been just sufficient to beat it. But the 4th trainer bailed midway, leaving me and the other 2 to fall just short. Dork.

Got a second chance today in the last hour of Latias week with a more-seasoned and less twitchy group, and got one right as 1pm came around.

Not the most perfect specimen and not shiny, but I’m pleased that I finally got one. Looking forward to the Latios week and a chance to get a match for her. 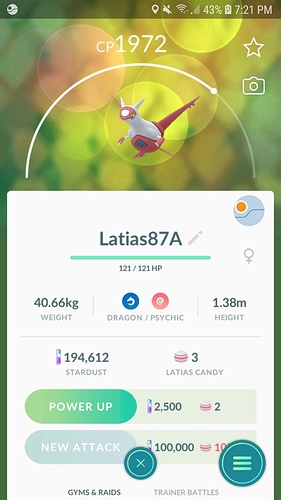 Is there already anything known about the shiny rate? It seemed to be extremely low compared to Kyogre and Groudon… From our Group only one got a single shiny the whole week. We weren’t raiding as much as for Groudon and Kyogre, but I remember at least two accounts getting a shiny each time back then… (not me though).
I got a 98% IV one (15 attack and HP), that’s OK I guess… but I’D rather have the lowest possible shiny than this…

I always wonder about these numbers?
Is that 1/19 for an individual trainer or a group(s) Raiding 1/19 someone in the group will get one. 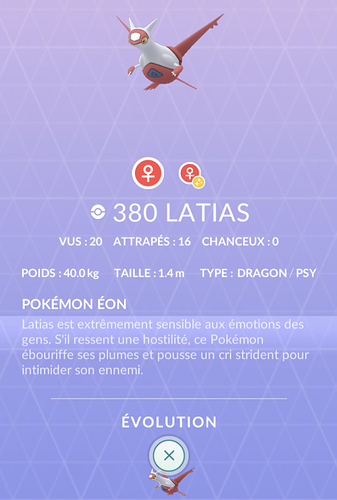 I think it is for an individual player. Recently I did two Latias Raids with 18 other accounts (so 19 total) and nobody got a shiny. And that twice.

But yeah, if it is the rate for an individual player, then why are there still people with no shiny after 30 raids? I have no idea.

The wonderful joy of RNG.
I’m very clinical when it comes to catch rate % in general and convincened there’s something more than just pure RNG happening in the back ground.
Seen too many things to not to think otherwise.

I myself have no shiny kyorge or care to have it. Still no shiny shinx after 100+ raids. i personally don’t care for odds. I look at it like, if i get it i get it. Can’t believe your gonna raid 19 raids and get it on 20th just because, it doesn’t work like that. You can get on First ever raid or never at all.

i have had a topic about higher lvls should have higher chance at shiny🤷🏾‍♂️ shiny rates suck and only good on Cday everything else to me is RNG random.

This topic was automatically closed after 2 days. New replies are no longer allowed.