An Honest Review of the Pokemon GO Plus. (And a Picture of the Niantic HQ)

I got my Pokemon GO Plus in late 2016 for the holiday season, but only just got it to work, reading the instructions and building and connecting it to my phone. Honestly I wasn’t that interested by it before because no one did a review like this, or one that I read was not detailed. In this review I’ll focus on the pros and cons of the Pokemon GO Plus.

If you go for the Gotcha,look here: 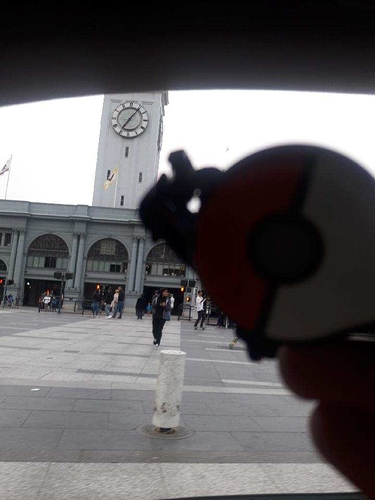 A picture of my Pokemon GO Plus in front of the Niantic headquarters, taken about 6 hours after squirtle squad was announced. #SquirtleSquadorRiot

But the Gotcha has better catch rate

It does not, they both throw a standard pokeball at the pokemon. You can make a gotcha review if you want but this is for the GO Plus.

In 2. you mean you can let Go+ spin the stops while you catch Pokemon, right?

I don’t think that’s true. Gotcha just mimics what a plus does, so the catch rates would be the same

As for the go+ I think it’s useful, I am disappointed with the catch rate overall. I think if you pay $30 for something it should be better than the lowest possible catch rate in the game (one regular ball, no curve, no candy and no throw bonus) and immediately flees if unsuccessful. With so many shinies in the game I am using it less and less.

Big every day user of Go Plus and Gotcha here.
The most important thing IMHO is both devices are tools to supplement your game play and are not for replacing the traditional look at screen and manually flick balls at Pokemon. If your thinking it will replace that than your going to be very disappointed.

Go Plus
The Pros
Great for spinning stops and Gyms to quickly restock the bag quickly. It’s much easier pressing a button to spin than clicking the item and swiping the disk. Even quicker for Gyms that have to be opened. This allows you collect theBalls and Health items while on the move (provided your under the 40k cap).
It saves me 30-60mins using the Go Plus restocking the bag over pulling over, parking legally, pulling out phone and swiping screen.
When set on Pokemon as well as Stops it can catch Pokemon that you would normally be driving straight past not bothering about because of the pull over, park, flick ball. Every one you catch is bonus Star Dust IMHO plus the small amount of XP gained as well. We all know the game is a grind so every little bit extra helps build those tallies.

The Cons
It can be a painful process pairing up with your device.
It only throws 1 Red Ball and if you run out of Reds that’s it.
The catch rates is a bit on the low side IMHO and may have got worse since the introduction of weather boosting. I did a catch study a long time ago now. Sample size was 1300 encounters and catch rates was averaging between 50-60% back then.
There’s a very high chance the Pokemon runs due to the low catch rate/red ball/straight throw.

Pokemon GO is one of the most profitable apps. Those devices are sold at ~30 euros in Italy. So those problems are unacceptable. Especially points 1) and 2). I sold mine.

This topic was automatically closed after 19 hours. New replies are no longer allowed.