Will Rural Players EVER Be Equal to Urbans?

I know, this topic is nothing new. It’s been talked about since the game was released, but it’s a topic that geniunely needs as much attention as possible. It’s a problem that Niantic refuses to acknowledge, let alone fix.

PokéStops and Gyms are extremely important and potentially manditory for enjoying the game, yet millions of people, myself included, can’t use one without traveling miles away. Then, there are the cities with dozens in the same area.

The worst part about it is that Niantic doesn’t even care. A year and a half after the launch and nothing has changed. Rural players are STILL being punished for living outside of big cities.

Niantic has put time and effort into things like preventing GPS spoofing, and when they found out spoofers could bypass that by rooting their phones, they put in even more effort to prevent rooted devices from playing all together. All that, but they can’t take some time to manually add PokéStops/Gyms in areas where there are none or at least take some requests for them?

In all honesty, it’s hard for me to blame the people who spoofed their locations. The majority of spoofers were doing it to have an unfair advantage and were genuine cheaters, but there were a lot of them that spoofed to escape an unfair disadvantage. And the ones trying to escape that could have been stopped if Niantic would have actually listened to what their fans were saying. If your players feel like they have to “cheat” in order to play the game then you need address the issue, not remain silent about it for a year in hopes that people will just drop it.

No, can’t see it ever happening without destroying the game.

I don’t believe total equality will ever occur. But I do think there are some changes that could be made to make the game fairer.

1. Raid timer increases for less players.
This would make all raids soloable, but would provide a time and items advantage for more players.

2. Pokestop and gym request system.
I have wanted to see this since the start. My idea to keep it so that there aren’t too many requests, was to make it that at level 30 you unlock a new shop item which costs a certain number of coins. You may buy a maximum of one per 10 days (36 a year) and they do stack. These items could be used by going to where you want the pokestop or gym and using the item. It could cost more to make a gym.

3. Pokemon spawns made slightly more equal.
Any current spawns should not change. But there should be spawns worldwide where there isn’t water. My thought was level 15 S2 cells. In the middle of each of these could be a new spawn, unless the S2 cell is mainly water.

Which idea is your favourite?

I hope eventually Niantic will make changes like those. Of those three, option 2 is the one I’d be happiest to see. PokéStops are too important for so many players to not have access to. If you’re too far away from them and run out of Pokéballs, your options are either to start a brand new account or buy them with real money, both of which are unfair.

I realize that going through thousands of Gym and PokéStop requests is a lot of work, and I wouldn’t expect Niantic to do that. It’s just unreasonable. That’s why I like your idea of requirements for eligibility of making requests. But, I personally think level 30 is a bit high for it. From what I’ve seen, a lot of rural players (the ones who need to be able to request them in the first place) can’t reach level 30 for whatever reason.

The Ingress method for attempting to create PokéStops is so ineffective it makes me sick. If I’m understanding how that method works, it will never help rurals at all. I remember reading something that said that in order for an Ingress portal to become a PokéStop, high leveled Ingress players have to vote on it. Why would they vote yes on a request for a PokéStop so far away from places like parks and museums that only a few people would use and benefit from it?

Something needs to be done about this issue. Even if what they do doesn’t make a big difference at first, rurals need to know that they’re trying to help. Right now it seems like they’re just giving us a middle finger.

Making all raids soloable defeats the purpose of raids. Giving a solo player 10-12 minutes to complete a legendary raid would just be tedious are gets rid of the whole point of raids which was to make players come together to battle. I’ll be the first to say that I hate not having raids groups (I got my first legendary yesterday purely by chance after stumbling upon a group waiting), but I’m enjoying the challenge of building up a team to try and solo the tough level three raids. There has to be a challenge in the game otherwise whats the point in playing?

Agreed, purpose of raids is gathering people to beat bosses

Its already happening. First i had no rare spawns. Now, some dragonites appeared, and even more.

To give a short answer: no, sadly Rural and urban players will never be equal

No.
I play as much as i can and im level 33.
But with some little trips and luck i got this as top. 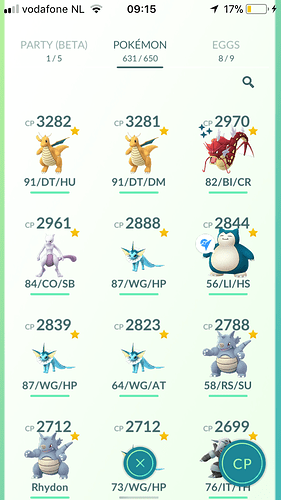 Rural players will never catch up with Urban players. But additional Pokestops and gyms are important because you can’t really play with either of those.

You have just beaten me hehe.

This topic was automatically closed after 62 minutes. New replies are no longer allowed.