What's your favorite non-traditional Pokémon to put in a gym?

Personally I love putting in my Espeon or Umbreon just because they’re some of my favorite eeveelutions! And you don’t see them very often, especially Umbreon, so I think that is kind of cool.

Regionals : either Corsola or Heracross… trying to help build others seen pokedexes

I traveled for both of them

Miltank and Shuckle. I hear people struggle to find them. Fun to build that Seen Pokédex too.

Occasionally I’ll do a Piloswine and a Tauros if I knock down a tower of power and wanna make a point. lol

Quagsire. Do I need to say more with that face?

Alakazam and Gengar: because I can’t help think of that one episode that shows their strength and how beasty the are! (for those who’ve watched them, you know what I’m taking about) plus, aside from their “specials” (not really displayed in PoGo) and crazy DPS (sometimes) they’re pretty cool

Murkrow, as a troll mon, generally after soloing a 10-level gym, knowing that it’ll get knocked out in minutes/hours.

I’m always use my taurus despite being weak like really weak! because he was my first international regional exclusive and I live in europe xD

That’s awesome! I went down to Florida over winter, but it was before the gen 2 pokes came out.

I do always love when I see starters in gyms. There’s just a special place for them. And I know exactly what you’re talking about! Alakazam and Gengar are awesome. I do have a Gengar, but sadly no Alakazam just yet.

Smoochum… basically for laughs, because her name is LILITH and she’s got 666 CP. I hope that gets an “okay, that made my day” out of people when they see Smoochum in a gym and then notice the CP and the name. It disappointed me later to realise that LILITH being all caps isn’t visible to other players because all Pokemon names in gyms are all caps, but I decided not to re-rename her.

I’m also often showing off my Girafarig and Miltalk. The other two teams are dominating my neighborhood so it doesn’t really matter what Pokemon I put in gyms, even my best ones don’t last there very long. I’m more likely to defend gyms with quirky Pokemon I’m never using in battles. I don’t take it very seriously unless my team already had the gym when I got there, which is something I’m not used to seeing every week. 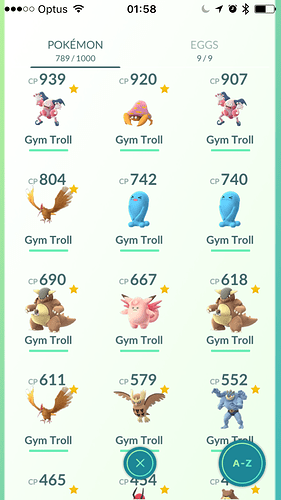 Haha I love it! And yeah around where I live the other teams dominate the gyms so no matter which Pokémon I put in there it just gets taken out immediately.

I love putting in umbreon and tentacruel

Nice! I don’t even have Tentacruel registered yet!! Tentacool are not that common where I’m at.

Porygon-2, it’s my favorite Pokemon, it’s not too difficult to beat so anyone nearby can have fun battling it and it knows hidden power so you never know if it’s going to be super effective against your attacker or not. 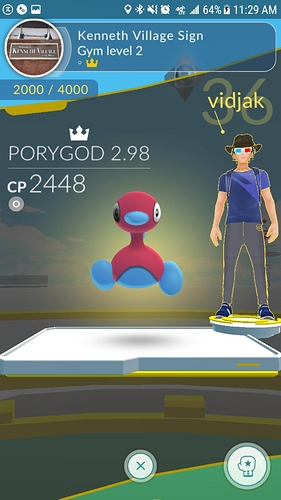 As a troll option after wrecking the enemy: Muk. He’s literally flipping everyone off. As the leader popping up on everybody’s view it’s funny.

I like to throw my maxed perfect scizor cause, red and stuff. Working a 96% counter wobbofet…on my alt lol.

Used to be poliwrath and slowbro but since the last nerfs and buffs, if you want to stay on a gym as long as possible it has to be one of the high CP 7.