What do you think will be the best Pokemon in Gen 4?

What Pokemon do you think will be the best in Gen 4?

Garchomp
Glaceon, Mamoswine and Weavile will be great Ice-Type attackers
Magnezone and Electivire will be good Electric-Types
And I guess that Magmortar is a decent fire type

The answer is obviously Arceus, the Pokemon God. Nobody can surpass God’s strength.
In general, Arceus is able to switch to any types such that it will eliminate the effect of Pokemon types. It could be a attacker in any types. However, I don’t know if it will be the same case in Pokemon GO. But still, we all expect Arceus is the best Pokemon, and so called ‘the Pokemon God’. (Arceus’ atk,def are the same, which indicates that Acrceus will not fail in both of the category)

Since it’s a Mythical it might not be released however

The best Pokémon will be undoubtably be Froslass. This answer has nothing to do with the fact that it’s my favorite Pokémon, nor that I’ve saved up enough candy and female snorunt to get 10 on release day. It’s th fact that both ice and ghost type are good in the meta and that Froslass will be an underrated glass (or ice) cannon.

I expect garchomp to be good. I hope that Arceus isn’t only through raids, because that would unbalance the rural:urban strength level even more. Right now many rural players already have problems with urban players coming through the small towns and taking all the gyms that have been standing for weeks in 15 minutes.

Why would you want a gym to stay the same for weeks? I live in a small town and I love that the gyms change daily, that way every can get their 50 coins. That’s the whole reason for battling gyms.

Also ryperior will be good

I personally think that Weavile will disappoint… And probably Electivire and Magmortar, though I hope those 2 are good

Weavile will be more like Jynx I think, just one million times cooler

Finally I can use my 2 Lapras…

Arceus stats
Attack: 262
Defense: 262
Stamina: 240
So his Attack and Defense are the same,but the Stamina is less.

Sure? This was tweeted on march second: 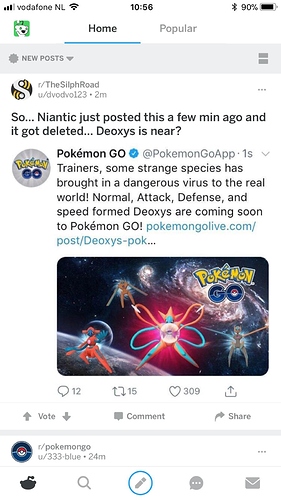 You are fake news

I don’t. The problem is that normally the only way i get gyms taken down is by people from cities, all at once, after being there for weeks.

I dont understand, thats still better than not getting anything, especially how easily you can reclaim them

I got it from a PoGo community here

I wish all gyms would be reset at the end of the day, or that you can get your pokemon back from afar.