Chicago is in America…

EXACTLY. They forget we exist

BECAUSE OF RAIN??? There was a freaking ice storm in southern Ontario in April and they didn’t do ANYTHING

I’m not. I’m in Toronto which is barely the boundarie for Tauros Canada doesn’t get tauros unless you’re bordering the us. They postpone in Japan for rain. But not in southern Ontario Detroit etc for a FREAKING ICE STORM. That’s what makes me mad

Where are you in Canada? In Toronto the winters aren’t that bad. It’s like Chicago or New York winter

Yes toronto. Wasnt that bad but bad ice at times.

But if the rain is actually killing people it’s understandable

Oh cool you’re in Toronto!! Have you joined the discord I wanna know if I recognize you from discord

I know but ice can kill you and is more likely to kill you. I don’t get how rain can kill u tho

You dont? imagine water… Then imagine 3 meters of water above your sidewalk. Add some strong currents that can throw your house on its side and then im sure you can imagine how rain can be problematic…

But ice over the sidewalk, fallen on your head, falling over trees, etc. your roof could’ve broken any minute. No excuses they should have postponed mareep but they didnt they. We had to go out in that. Screw niantic. I could’ve died that day

Well to be frank. I didnt do Marrep and still dont have a shiny. I remember that day, it was snow storm and ice storm. Legit stayed inside that whole week. Was very dangerous.

Anywhere with bad weather on an event day should be postponed. Think of the children.

Dude heavy rain can lead to floods and land slides… that’s how it will kill people, how many people died in your ice storm? Pretty sure it wasnt 100+ else it would have been on the news.

As much as it would be nice to postpone it when it’s crap weather in all locations, for some places it would mean you couldn’t play for weeks.

Also how did you not know that’s why it was postponed if you were there?? Kinda seems like you spoofed there

Sea level rise can have bad effects on many places. Flooding can inundate large zones of land. Rain in valleys can have the same effect. Here’s a map of Shanghai, China. One map is right now and the other is if 6 metres of sea level rise occurs. As you can see 6 metres is more than enough to take out most of the city. The floods in Japan are similar. It makes sense to cancel Community Day in Japan for that reason.

Ice can also be very dangerous, but I think their idea was that if they cancel community day every time a northern, colder country gets some snow, then community day would be cancelled every time.

I mean the floods in japan are this bad, I think that it was fair and respectful to not have a pokemon event when this is happening on the other side of the country where it’s taking place. 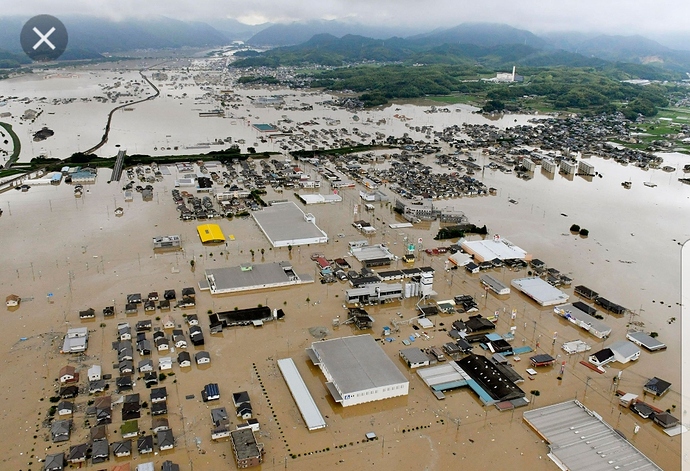