according to the Dutch fansite for PoGo shiny Oddish is released.
I have no confirmation but for those out hunting, don’t skip any oddish for now (and most likely forever from now on since the dutch site is good on it’s news).

I have confirmation from NIantic: 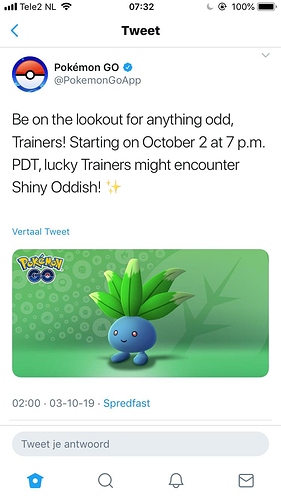 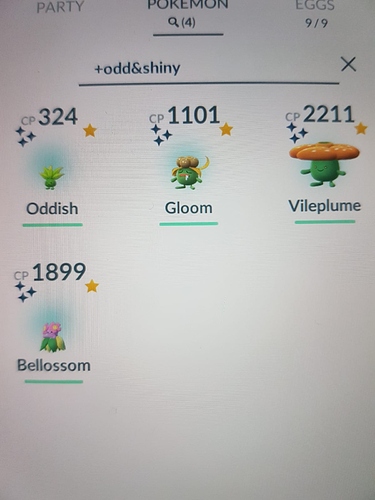 But you made me curious about the Dutch PoGo fansite. I hope it’s not nwtv, as they aren’t a fansite at all.

i personally hate NWTV, but it is that one. The definition of fansite can be argued here but i don’t care, it’s a dumb site which is dedicated to too many games and has a [email protected] of a layout.
Sadly my GF uses it to get her info since the site is way faster then GoHub.

Also, i don’t have twitter, hence my precaution in conforming it.

At least Gohub is mostly accurate, which I can’t say of nwtv. Have seen them publishing too many fake news allready and checking your sources takes more time then dumbly publishing every rumour indeed.

(and most likely forever from now on since the dutch site is good on it’s news).

Its better now than it used to be, but i wouldnt call NWTV “good on its news”…

That’s a matter of definition tbh. As i said, i hate that site just from the layout and mutiple games they report on, but the posts they make are correct. They rarely post false news, if any at all. And that’s worth something, so credit where credit’s due.

Edit: i’ll rephrase is otherwise: If NWTV posts that oddish can be shiny from now on, i believe them. Even you guys have to admit that they are credible enough for that.

10 minutes after they started spawning @ 7pm pdt it was on Reddit. The shiny rate is high, spawn rate low.

So it seems to be better than Yanma’s? Because for Yanma both the Shiny rate and the spawn rate were low.

The reverse over here lol

Spawns here aren’t raised that much compared to a normal migration. It was extremely busy today so had no energy to even walk around the block. I hope to catch some tomorrow.

A lot less oddish out this morning as compared to yesterday. Still no Shiny here.

Nevermind. Found 1 on my way home from school today