Share your Mudkip Community Day in here.
Did you get the Shiny and IV’s you wanted or was it Community Fail?

I will not be able to encounter any Mudkip I’m afraid but I have some good Marshtomp ready to evolve.

I’ll fire one incense and look what comes from that

For this one I went to a totally different spot to where I normally go to see if I could have better luck in getting a great IV.
Sat on a 3 Lure 1 Gym spot for the whole 3 hours.
Total spawn number was ok without being great but there was just as much other Pokémon as there were Mudkip. The ratio wasn’t what I’d expect from a CD so that was a bit disappointing.
Things were looking bad as I hadn’t seen a single Shiny for the first 2 hours. Felt a little insulted when the first one I get 10min into the last hour is 13cp then a second 4 Mudkip later 43cp. With only 10min to go a 3rd one 598cp and another 2 Mudkip later 47cp.

All up 124/128 at 4/124 Shiny.
Best IV found sadly too late to evolve was a 91% 15atk.
Evolved a few Swamprats in wait for the time I can Trade them with the other family member to re-role the poor IV to something useful. 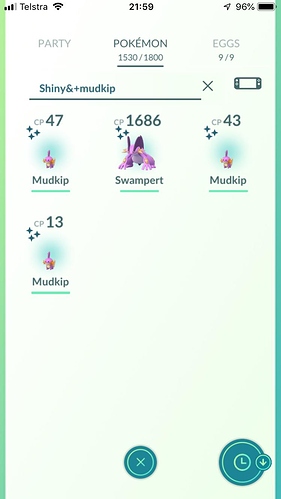 I’m on vacation in a small town in Greece. I have mobile data so I can play here. There are 3 Gyms and 6 Pokestops nearby. I played the whole 3 hours, I used lure and incense, but I couldn’t find a single 3 star excellent IV Mudkip. So I evolved my 3 good Mudkip I saved from before. I found only 2 shinies. Not bad, but it could have been better. 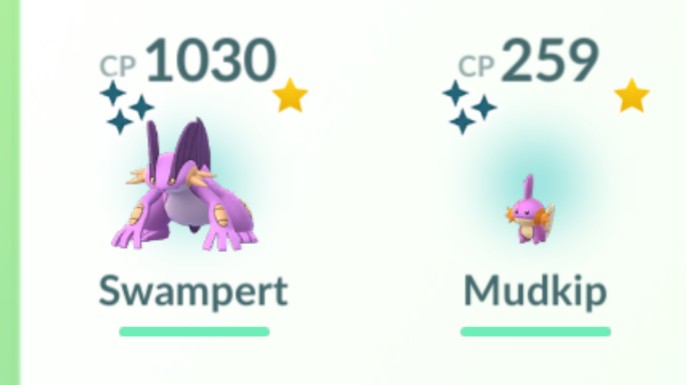 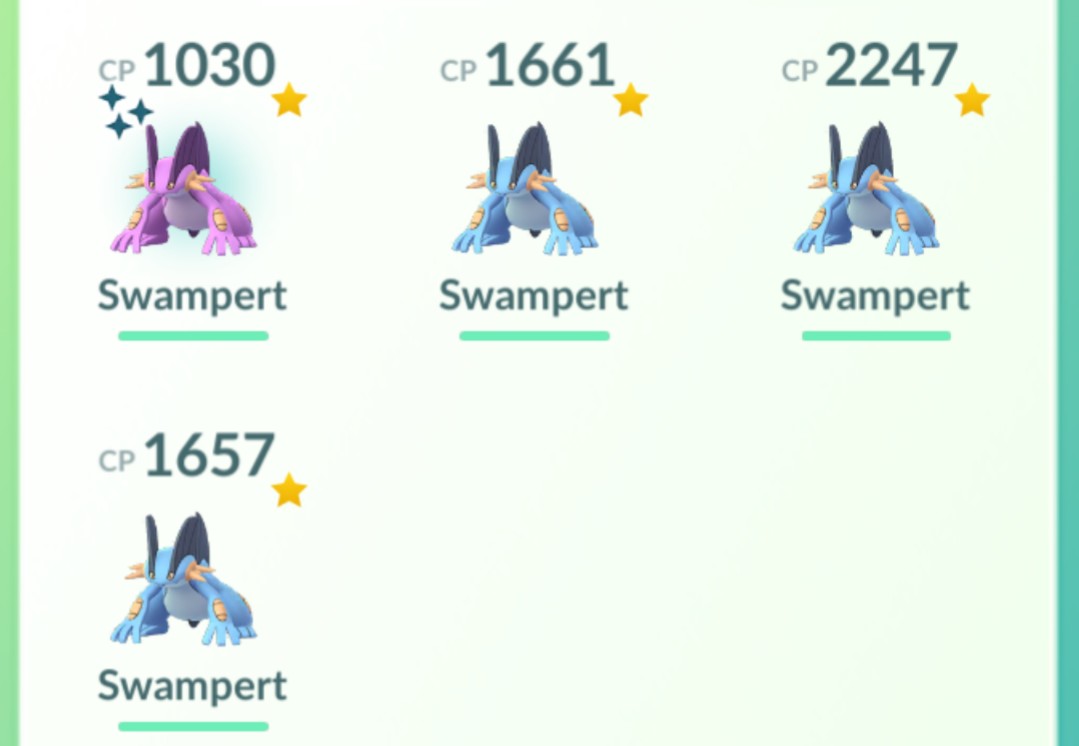 Could play for just 20 minutes. But got my 98% that I kept in stock with a CD move and caught a shiny. 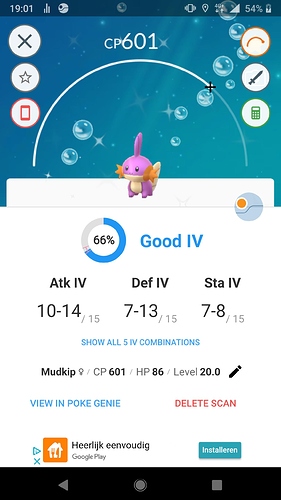 273 caught.
7 shiny. No special IV’s. Got some spare candy so ive evolved 3 for the move and future lucky trades should i ever want one.
Evolved 1 for PVP (ended up 1498CP).
Evolved a 98% and 2 96% all with 15 ATK for the move. Probably wont power them up cause of my Kyogre/Gyarados army but who knows. Maybe if it turns out as a top pick against a future raid itll be nice to have them.

Couldn’t walk much, but the seventh was a shiny, and after getting him I gone home.

7 Shiny Mudkip, all of them bad IV. I caught 2 93% high cp mudkip I evolved immediately.
I evolved 7 HC Swampert. All in all I had a nice Community day. The shiny Gastly I got out of research afterwards was the cherry on top.

15 shiny Kipperz for me. The best a mere 69%er IV-wise. Actually caught 3-in-a-row in the space of a minute - never even had a chain of 2 before! Best IV overall was 98% but with a low CP.
I’ve included a snap of my local town’s deserted main street taken just after 4pm. The person in the foreground is Mrs celery and the lady in the far distance is staggering between two pubs.
Needless to say we couldn’t form a quorum to battle armoured Mewtwo, but aside from the usual heckling in the town square the event passed without incident. 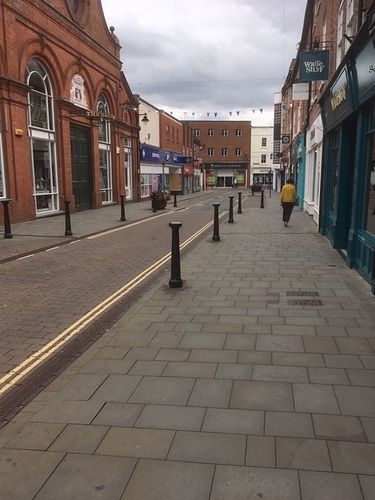 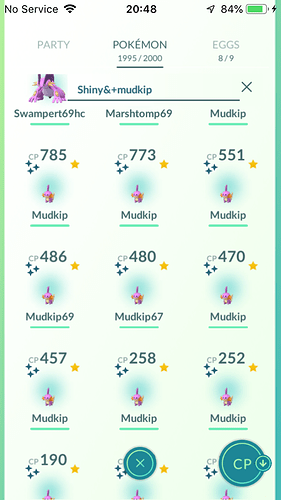 It was a pretty good day. Nine shinies total and the weather wasn’t too bad. Didn’t catch anything notable, but I have a Lucky Trade deal with someone soon who wanted to do a Shiny Swampert for Shiny Swampert trade so I’ll have that ready for him.

Good day. 16 shiny Mudkip with the best having 89% IVs; had 3 perfect Mudkip (one hatch, one wild catch and one trade) in inventory so I’ve git an army and I managed 2 level 30 lucky trades with 96% IVs both missing Defense.

Not sure how much dust and XP I got but it was appreciable in both. Overall very good day!

5 shinies and one shiny had three stars almost perfect ivs so I evolved him. Low cp though so it will take a lot to get him up to speed. Got a decent regular one as well.

9 shiny with 1 being 91% with 15 attack, also caught a shiny Misdreavus toward the end of the CD hours, and a shiny Kanto Diglett after CD hours, it is a pretty shiny day!

That was a nice Community Day this time. I was at our local park, which had gained two Pokéstops recently (yes, that was me… And I’m planning some more. Pokéstop submission is great, I really hope for all of you who are still waiting, that they make it available worldwide soon

), and we lured it all up.
Unfortunately after about half an hour, it started raining heavily - but no weather boost

. We knew it wouldn’t last long, so we split up into several cars and either circled around town or - like the car I was in - parked at a spot with some lures in reach. After the rain passed by we all returned to the park.
I ended up with 9 shinies, none of them very good IV-wise. Non-shinies weren’t too good either, but I had hatched some good Mudkip which I could evolve. Oh and I caught a Dratini with 15 attack and 15 HP just randomly. One of my best I have…
I completely forgot about keeping track of the number seen/caught, but I don’t think the number is too different from other community days, it was probably 110-150 seen, with almost all caught.

In between we also did a Mewtwo raid (not good, but hey, Mewtwo candy!) and I have never seen so many PoGo players in one place here in our town before (except for maybe back when we had a Mewtwo EX-raid field test here). It was awesome to see that this game is so far from dead and that new players join in every day. 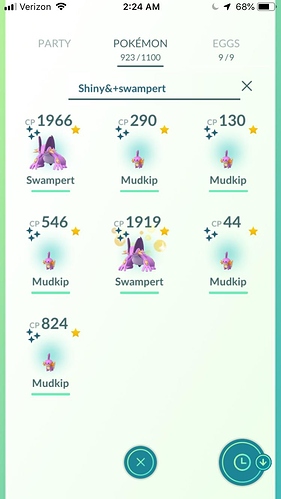 Yeah, we did an armored Mewtwo raid during the CD hours too, there were 200+ players around the gym, lobby filled up fast.