Post your own fanmade Pokemon
Can be your own megas, evolutions, alolans or totally new ones
You have to give a name and a type and description(required)
And you can also post other Pokedex stats including drawings

I’ll post stats and a drawing later but :
Laplord. After evolving from lapras, Laplord now has 3 horns. Labrador’s fast speed allows it to bash other pokemon with a powerful horn or tri attack.
Water and dragon type

Oh I’m all over this. Art incoming soon.

So, once upon a time, I did make my own Pokedex. Some of it was pretty lame, I admit. lol 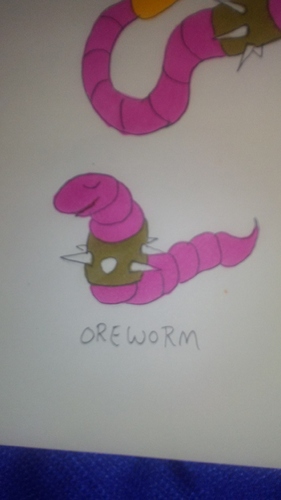 Oreworm is basically an earthworm that eats dirt and spits it at you. Like real earthworms, it is also blind. It is considered an unintelligent, but very loyal, Pokemon who can locate it’s trainer by smell. 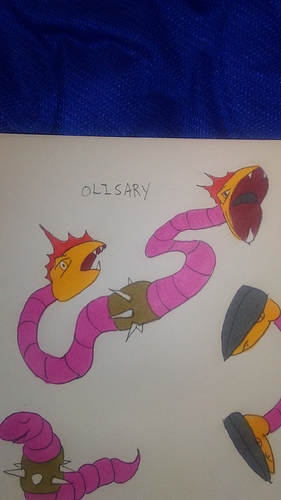 Olisary is a portmanteau of “Oligochaeta” which is a scientific term for earthworms, and “adversary”, due to it’s combative nature. 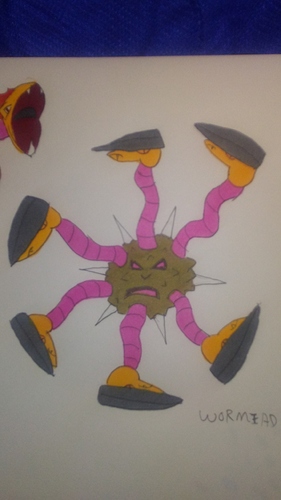 Wormiad is a six-headed worm creature that has formed dirt and mud into a fake face to scare off predators. It spins like a wheel at a surprising rate of speed, straightening it’s heads to do so. Each head is topped with a rock-hard blade-like growth that is razor sharp.

Wormiad is a portmanteau of “worm” and “myriad”. It’s heads are meant to somewhat resemble pickaxes.

Dreamlax, grass fairy type, evolution of snorlax (grass stone)
Attack: 198
Defense: 358
Stamina: 288
It looks Like a snorlax but it is green and has some leaves and flowers on it

Nightmarelax, Fire dark type, another evolution of snorlax (fire stone)
Attack: 358
Defense: 198
Stamina: 288
It looks like snorlax but it is red has flames on it is standing up and looks angrier

Just realized that I forgot to add stats, moves, and abilities. lol

So, more bugs from my Pokedex.

I had seasons in my Pokedex, so in the Spring and Summer, you could find … 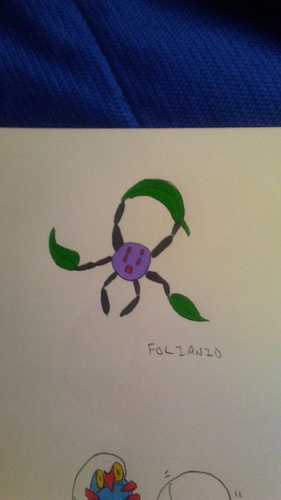 Folianid is a tiny spider that carries a leaf above it’s head and allows the wind to take it to new areas. It holds two more leaves in it’s hands that can be used to try and pivot the Pokemon in the air to try and change direction. The leaves can be wielded as tiny weapons if need be. When Foliands hatch, they leap off of trees and into the air. Wherever the wind takes them, is their new home, should no predators spot them.

Foliands are based on spiderlings, which are baby spiders. When born, spiderlings release a small amount of web and allow the wind to take them. Folianid is a portmanteau of “foliage” and “arachnid”. 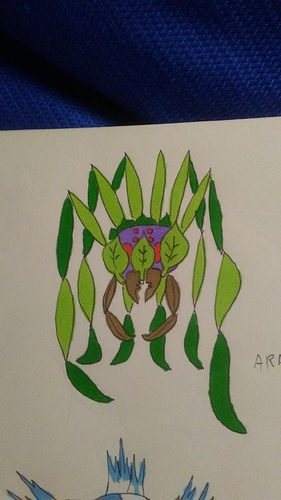 Arachnibush are stealthy predators that lay on the forest floor, hiding their true size. Appearing to be a pile of leaves, Arachnibush strike with deadly accuracy, attacking with it’s vine-like legs and mouth pincer. An Arachnibush can sit and wait for days for prey to wander by before attacking, ignoring anything too large or small.

Arachnibush is based loosely on a more vicious version of a daddy long legs. It’s name is a portmanteau of “arachnid” and “bush”, which has a dual meaning: bush as in plants and the word “ambush”.

… and in the Fall and WInter you’d find … 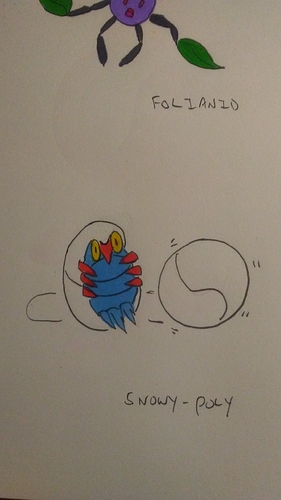 Snowy-Poly are small bug Pokemon that can roll up into a snow-covered ball. Snowy-Poly are cowardly Pokemon who will run from a fight if it can. Even when cornered, they will resort to their ball shape and remain very still in hopes that their attacker gives up and walks away. Snowy-Polys are commonly mistaken for snowballs in the Winter and are frequently thrown as they are unwilling to un-roll when picked up.

Snowy-poly are based on pill bugs, or rolly-polies. Their name is a portmanteau of “snow” and “rolly-poly”. 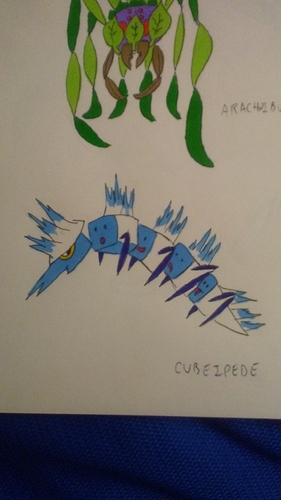 Cubeipede is a series of bugs with one hive mind. Each segment can act independently if need be, but the majority of the time, they are one form acting in unison. This ability causes them to scatter if need be, avoiding a direct hit. Cubeipede are typically peaceful, but can be vicious if threatened and are protective of their homes.

Cubeipede is based off a centipede … more accurately, the Centipede from the old arcade game that still attacks in pieces if blown apart. lol … it’s also meant to somewhat resemble a chain of ice cubes. It’s name is a combination of “cube” and “centipede”.

I have just over 100 of these by the way. I literally created an entire Pokedex once upon a time. lol

A very good idea… I don’t know if Niantic is interested, or if they really need it, but it’s nice, let the imagine fly, and shows that you have a creative spirit.

Thankfully its not Niantic that makes Pokémon

Taking a break from bugs (and I do have more lol), it’s time for a few water types … 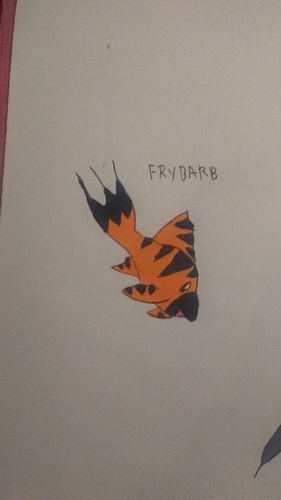 Frybarb is a small schooling fish that frequent the shoreline. Frybarbs are very friendly and curious and have no problem coming up to swimmers and trainers. This causes them to be a common early Pokemon for trainers and as household pets. Frybarbs have a highly acidic taste and have tough bones so they are avoided by even starving predators.

Frybarb is based off of the tiger barb, which is a common household aquarium fish. The name Frybarb is a portmanteau of “fry” which is a baby fish and “tiger barb” 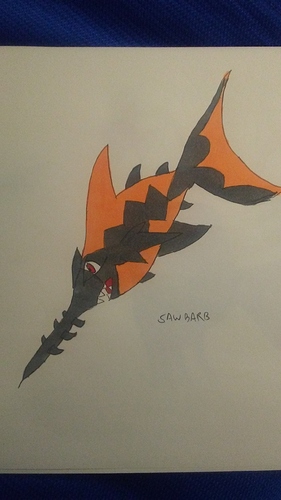 Unlike Frybarb, Sawbarb is an aggressive Pokemon who stays in deeper water. Even when not hungry, Sawbarbs will hunt other fish Pokemon obsessively. Once a Sawbarb has started hunting it’s target, it will not let up until it has defeated it or has been defeated itself. Sawbarbs are tireless and have been known to hunt a single target for days at a time. 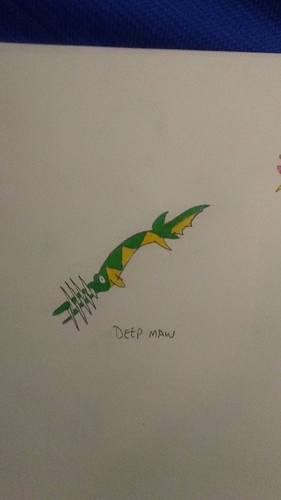 Deepmaw are ocean pests that are the bane of fishermen everywhere. Despite it’s intimidating row of long teeth, Deepmaw are harmless and rarely attack people and don’t hunt other fish. Deepmaw are actually scavengers who feed off the bottom of deep bodies of water, but are attracted to shallow water thanks to humans. They are well known for trying to eat fish already hooked on a fisherman’s hook, anything dropped in the water, and have even been known to leap out of the water to nab things out of people’s hands. Deepmaw are highly invasive and have been known to take over vacation spots if not kept in check.

Deepmaw are based off of gar, which are common freshwater fish in North and Central America. “Deepmaw” is a portmanteau of “deep” for deep water and “maw”, eluding to the Pokemon’s toothy mouth.

… at level 36, in deep water away from the shore, Deepmaw evolves into … 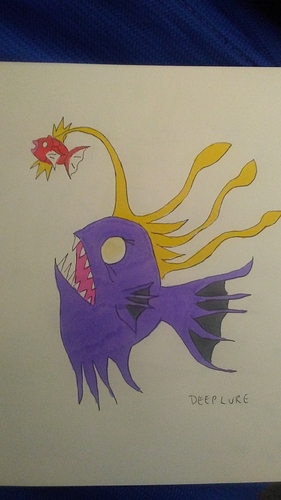 Deeplure are rarely seen as they avoid human contact, preferring to remain in deeper water. A Deepmaw will, in fact, only evolve in deep water. Deeplure are voracious eaters who spend the majority of their time waiting for an unwitting water Pokemon to come near them so they can swallow them. Deeplure are extremely slow swimmers, preferring to wait until it’s prey comes to it. Deeplure prefer darker areas where unsuspecting Pokemon can mostly see their Magikarp shaped lure. The tendrils on the back of Deeplure’s head give off a slight vibration in the water as well. Deeplure are highly dangerous, even to humans as they will attempt to bite or swallow anything that gets near them.

Deeplure are based off of deep sea anglerfish, but with a Magikarp as it’s lure instead of a phosphorous light.

Good catch. For some reason, my auto-correct wanted to put “blast”. lol

Metal Blast is a better name

I think instead of a magikarp deeplure should have a flame as a lure and be part fire type it doesn’t make sense to be a flame ib the ocean but still that would be funny. Or you could have a thunderbolt make it a electric type.