2022 has a trio of local events under the GO Tour label; I hope 2022 also has another global GO Fest or two… 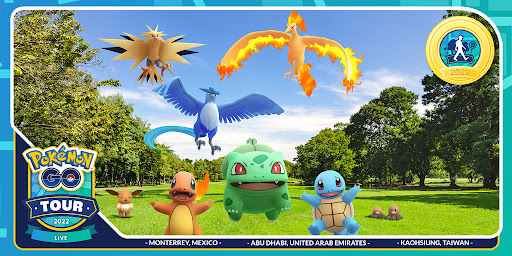 It was really good for them financially this year and the last, so they’d be idiots not to, but this is Niantic we’re talking about so…

I’m still wondering if global Johto ticket holders will have any event at all on Sunday.

Aren’t all three Johto events local-only? I saw no mention of being able to participate globally.

Those are Kanto events, but yeah. That’s what I’m wondering. It seems like the event is just for Saturday, and so for those of us who aren’t at those locations will have nothing to do on Sunday.

At this point I’m still confused about what events are happening where and which day. It seemed clear that the main events were to be local, happening in 3 specific locations. Now it seems there are some things happening globally, but I can’t tell what, for certain, is local, and what is global.

And while the graphic for the latest event post on PoGoLive (at Pokémon GO Tour: Johto — Special Research and More To Come! - Pokémon GO) shows a Corsola (something I still need in my level 49 chase), it is not listed in the text among the mons available in the event.

I might try to decipher what’s happening, when, and where, if I get a few hours to research it more (by printing all of the event-announcement pages and writing out for each day everything that is happening and where). But won’t even consider buying event tickets unless I can figure that stuff out.

My guess is that Corsola and Heracross will be available as Raid Bosses like how the regionals for Kanto were available last year.

How are you preparing for Pokémon GO Tour: Johto?

In this moments I have about 600 Pokeballs… I think with what I get on the way its enough.

Well after the deluge we’ve endured on the last 2 weekends in the U.K - I decided to take some sensible precautions.

Now the weather people are forecasting that it’s gonna be dry…
Sheeeesh, back to the drawing board!

Haha, next time you wear it you have to make a foto for us… shurely it would be better than any real shot of a Pokémon.

Well, Im playing now 8 hours nearly all the time. The worst day I had with this game so long.
One, yes one, of the offered shiny, nothing better than a Sudowoodo. Nice with his red balls, but…

Too much things to do, in too short time. So much features at the same time don’t make more sense.
And the worst, I payed for it.

Another example, the Pokémon to catch after fulfilling a collection, nothing better than one of the most frequent Pokémon running around in the wild…

I don’t feel like I got value for money from purchasing the the ticket as I couldn’t commit fully to chase all the categories required as other things had to be done on the day.
I worked from 4am to 10am and it wasn’t until midday that I could actually really start playing.
Played from midday to 6:30pm driving around chasing the Raids moving from one town to another and on that time saw 0 Raikou raids thinking wtf. I had all the catches but we’ll short on the rockets and quest completion only catches so made the decision to abandon hopes of completing and headed off for the 40min drive home to cook dinner.
I get home and there’s a Raikou Raid on a Gym I can see from home so I do that while dinners is cooking. I forget to take the snap shot so stuffed that. I do some trades and by the time I see play screen there’s another but only 3min left on timer. Game crashed right near end of winning and timer has elapsed so can’t get back in

. Ended up doing one on PokeGenie just to get it done.
Don’t get me started on the

about increased Shiny chance for ticket holders. 3 hours before I get one while Alt with no ticket gets Shiny in first 3 Pokémon

I didn’t enjoy the whole experience and regret paying money for the ticket. All I really wanted was Corsola and I could have got that for free.

I’m having quite a great time with this event. Several shinies–two of them new–A HUNDO LUGIA–and a mountain of candies and stardust I needed. No complaints, really.

I mostly enjoyed the event from my desk, with one Pokéstop within reach, which I kept lured. Very little ever spawns there, so I used incense. Both main and alt caught a few hundred, with half a dozen shinies, and a dozen raids, but no hundos. Here are the shinies: 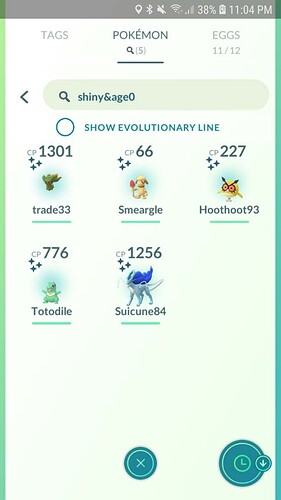 My detailed report is coming tomorrow.

I was very busy today, so I couldn’t write my report. Hopefully, it’s coming tomorrow. 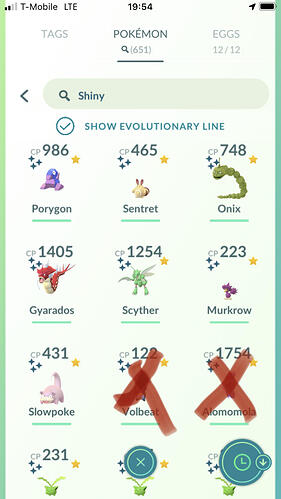 I had a lot of fun during Johto Tour, walked around for at least 10 consecutive hours without resting for a single minute, caught a lot of Shinies including some I didn’t have (Remoraid, Yanma, Phanpy, Girafarig…) and ended up getting 46 in total. I sacrificed one Shiny Hoppip though, it spawned at :59 so I was hoping it’d turn into a better Shiny, but it turned into a regular Murkrow. Can’t call it a loss anways because I already have a whole bunch of Shiny Hoppip. The 46th was a random Shiny Skarmory from the monthly “win a Raid” Field Research task, which is funny because the Incense Skarmory were shiny boosted yet I got it from a random Field Research. And it’s still somewhere in the stack now.

The spawns were good, Shiny rates could have been better but I can’t really complain. The only frustrating thing was the Collection Challenges, and it took me everything to get a Lugia, and when I finally managed to raid one it just ran away like nothing. I did eventually get it though. What I didn’t get was Espeon, because the event was so packed I had already forgotten to evolve one before the night time screen appeared. I did think of it earlier, but probably forgot because of all the spawns again.

I definitely had an increased heartbeat when I randomly saw that Shiny Togepi in my Storage, because it had been eluding me for too long, and now I finally have it! Unfortunately the hatch animation never appeared, though.

All in all I had a great day, but I’m not sure if it was worth a ticket, as the only interesting difference was the “increased Shiny rates”, but in the end even for ticket holders many Pokémon seemed to follow the standard shiny rate of 1/450-512, apparently. Ah, good old Niantic, will you never learn.

Here’s my experience with Pokémon GO Tour: Johto. Before the event, I made a list on a piece of paper of what I had to do during Johto Tour so that I wouldn’t forget anything. That proved to be a very good decision because otherwise I would have forgotten something for sure. I used all the information from GO Hub and Niantic blog to make this list. It included all the Pokemon from incense, raids, eggs, increased shinies (I highlighted the ones that I need), information about rotating habitats, special research (which had to be completed during the event in order for Celebi to get Magical Leaf), free raid passes, ¼ egg hatch distance, snapshots, 6 special trades, in-game music, trainer battles, mega evolving my buddy (Mega Charizard Y) so that I can get bonus candies for the Pokemon of the same type and finally to evolve Eevee. I played in my town on my bike. The weather was cloudy with occasional drizzle. I played pretty much the whole day with one big lunch break in the middle. I used incense all the time, star piece 2 times and 1 lucky egg in the end when I was evolving Pokemon. I chose the Gold version and Totodile was my starter Pokemon. My first shiny Pokemon spawned from incense in the first 30 minutes of the event and it was Mantine!

While I was playing, I received an invite to a Ho-Oh raid. It was my first Ho-Oh that day and there were 20 people in the raid. We beat it fast and when the encounter screen appeared it was shiny!

Later on, I hosted a Ho-Oh raid and got myself a great-IV one! I did 2 remote legendary raids (Raikou and Lugia) and hosted 1 more (Entei), but these Pokemon didn’t have good IVs. I also did 2 Corsola raids (one of them had good IVs), 1 Heracross raid (good IVs) and Unown U. I found all 3 roaming legendaries Raikou, Suicune and Entei. I caught the first 2 with a golden razz berry, but unfortunately couldn’t catch Entei. Suicune counted for the collection challenge as if I caught it in a raid. I got some good Pokemon from the special research, but the best was 100% IV Dunsparce!

Unfortunately, the legendaries and Celebi from the special research didn’t have great IVs. In the first part of the event, I went to a park where I took 5 snapshots. Then I went to the town center. I did many field research tasks, battled Team GO Rocket and GO Gym Trainers before going home for lunch. When I came back, I still had to find 4 GO Gym Trainers and to battle Candela. I went to spin some remote Poke stops to get some more research tasks that I needed to finish the special research, but I couldn’t find those Trainers anywhere. There were only 2 hours left before the end of the event when I finally found one. After that I had to bike from one Poke stop to the next (and some were far away) so that I could finish that challenge. I finally did it 30 minutes before the end. Meanwhile, I accidentally met a local player who happened to have the Silver Version so we traded each other the missing Pokemon. He also gave me shiny Skarmory and Unown J which I couldn’t find after six and a half hours of playing. Later on, I managed to find 2 of them on my own. When it comes to shinies, I found my first 2 shinies (Mantine and Ho-Oh) early on and after that I found a shiny every 2 hours (Spinarak before lunch break, Slowpoke during lunch break and Miltank after lunch break). After that – nothing!

Last 4 hours of the event were without shinies as if Niantic decided to turn them off. I wanted shiny Larvitar and I checked every single one of them, but couldn’t find it. Also I didn’t get some of the increased shinies for my version: Sunkern, Wobbuffet, Shuckle, Teddiursa that I needed. In the end, I managed to finish all research tasks, collection challenges and special trades for the day.

What I liked: the event was fun, all the shinies that I got were new for me, I got my first shiny early on, first Ho-Oh that I got from a raid was shiny, second had great IVs, I got good-IV Corsola, Heracross and some other Pokemon, I liked the special research, collection challenges, free raid passes, ¼ hatch distance, GO Gym Trainers were interesting, 6 special trades, spawns were good, evolved Pokemon in the wild, roaming legendary beasts.

What I didn’t like: shiny rate was low, I got fewer shinies than on Kanto tour, apart from Ho-Oh, all the other legendaries had bad IVs and weren’t shiny, bad IVs on Celebi (3rd time), we should have had more new Unown and their shiny rate should have been higher, Corsola and Heracross should have been in the wild, it was overwhelming and exhausting because there were too many things going on at once and there was no time for longer breaks.

I really enjoyed this event. It was like an adventure. I look forward to future events like this with some improvements. 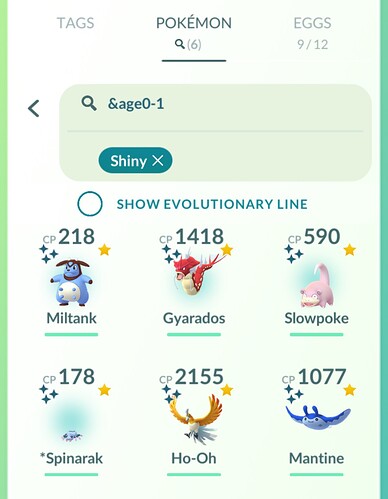 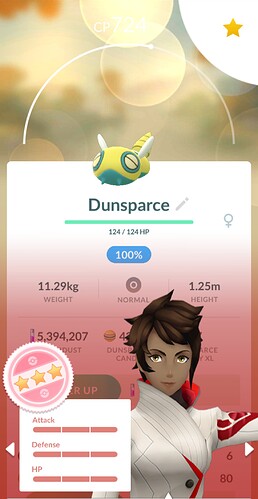 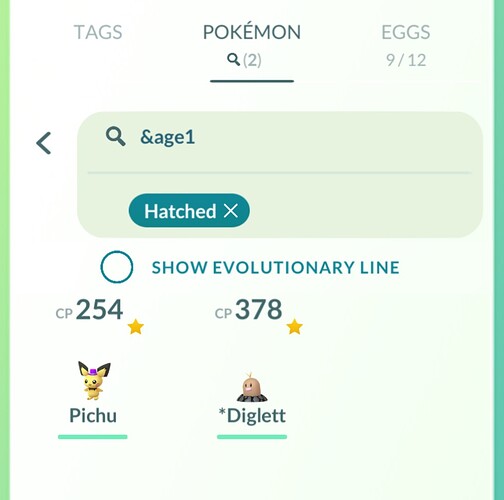