I’m actually going to invest in giving it a second Charge move, and that will be Draco Meteor. Yes, it will take a LOT of Rare Candies and Stardust to both level it up and give it that move (320,000 Stardust and 348 Candy total), but it’s a perfect. I’ll definitely invest in it. Primarily, it will be used as a Dragon-type attacker due to the paired moveset, but having Hydro Pump as an option will make it a nice go-to for future Fire-type Raids since it double-resists Fire as well as delivering STAB still.

I’ll be spending more Stardust trading than I likely would leveling up Palkia.

Nice, so both charge moves will have STAB. Rare candy is more of an investment for me if I ever get a 100% Palkia. How about fast move? Dragon Tail or Dragon Breath? I tested Dragon Breath in PvP, it’s very fast.

I’ll do a comparison

Dragon tail is better in energy generation, damage and ttfa 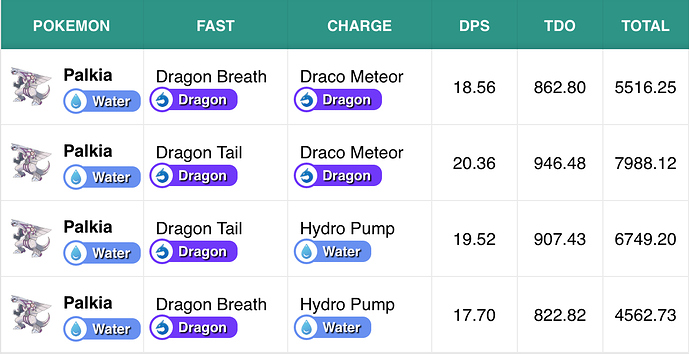 You don’t use legendary in Master as well?

Thanks, @Luke, so the DT/DM combo is way ahead of the others

Unless I’m specifically offered to do Legendary vs. Legendary, no.

Don’t worry, I’m not even close to being handicapped. My PvP teams are monstrous without Legendaries. I’ve only lost like 7 or 8 battles out of 75 in Master League.

Mewtwo is a staple for me…we are getting off topic…@mew1, I’ll invite him to grind

Fair enough, really hope that some days we could set customized rules for PvP

I have DT DM

Is palkia any good???

Good but could be better

While not quite as good as Rayquaza, it’s still a very solid option. Since I’ve dedicated my Rayquaza to be a Flying-type attacker, Palkia is it for me.