When you think it couldn’t get worse.

Also, I’ve finished my ‘small’ research about the cluster spawns before the shuffle and my results are exactly as I thought they would be. I’m posting them soon.

So here are today’s results:

To begin with, it seems like Niantic clearly failed in what they were trying to do.

I went to a few clusters. The spawns from the clusters in the more remote areas have been terribly decreased. The spawns around PokeStop have decreased too, but not that much. I noticed just a few less spawns. Except for one place, from the usual 15+ spawns there are just three poor spawns left. There was also one place that got a few more spawns: 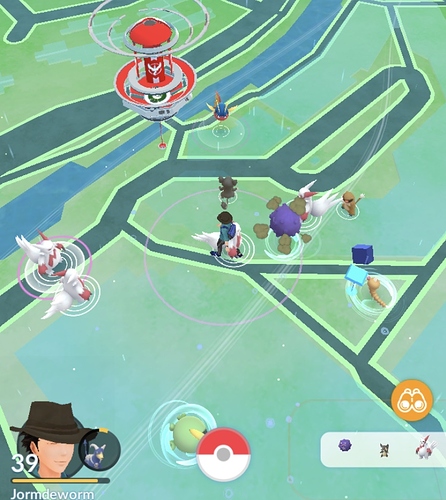 There were even more, by the way. It was a cluster before, too, but not as much as this. Also found a cluster a few meters away from the shopping centre while writing this. And apparently when I get outside of my house I’m actually in reach of a spawn point.

It’s still quite disappointing though!

I know a way to fix the blanck spaces on the map caused by the game changes. It is a big load of work and should not be needed in the first place.

And I’m not looking forward to fix problems caused by Niantic.

I haven’t had time yet to check all my usual spots, but … the spawn point across the street from my house is now gone. However, there are two new ones on my street. lol

Sadly, the spawns at work have thinned drastically. I usually check in throughout my shift and would have 3-5 Pokemon pop up every time I logged in. Now? 1-2, and not every time.

The altered spawn landscape and Altered Form Giratina raids (along with the extra week of Speed Form Deoxys) have combined to make today the lowest point in my 3 years of playing. The starvation diet of stardust – where a special trade or meaningful power-up meant chasing hundreds of catches – has become a famine.

“Gotta catch 'em all” suddenly seems like “Gotta find any” where I usually play. What a colossal drag. (Can somebody call me a waaaaambulance, please?)

I know a way to fix the blanck spaces on the map caused by the game changes.

You forgot to mention what that fix entails. Or were you just posting an empty boast to taunt everybody?

I’ve walked all the paths around my village and the only new spawn points are directly on my house.
There are no other players nearby.
It seems these new points (7 in total) have been created as a direct response to the in-game activity generated by myself and Mrs c.
We do A LOT of trading (trying for a complete lucky dex).
Solution: create another account and trade between the 2 - frequently - maybe more new spawn points will be generated as a result?

I know. It does need some creative linewalking. Not intending to cross any lines. I have some hours spend reading about the mechanics and “the rules of engagement”. So don’t worry. Not wracking maps.

I just hope that Niantic fixes the blanck spots soon.

Went out today to our usual walk spot and where community day usually happens the most by us. It was as I feared it would be. There was barely any pokemon around. I saw 10 when there is usually 30.

So don’t worry. Not wracking maps.

Maybe I’m the only one here who would like to know what the fix is, or what it means that you know a fix? Ordinarily your claim to know a fix, combined with your neglecting to offer any further comment on it, would be taken as a taunt.

Yes actually there is. Niantic “support” stated in one of their latest auto-reply answers was to wait a reaction of the official channel. So I guess there will be a response so I just try to hope for the best.

And the fix is in OMS. The magic is in the tag “landuse=residential”. Map wracking would be to remove it, but that is just miss use of OMS.

Applying them appropriately should bring back spawns. And believe me, it is a lot of work.

Thanks for the added context, @MrHeineken88. I look forward to either having it be fixed or learning what I can do to lessen the problem.

Sometimes a small park is not tagged as a park but just fall under the overlay of the residential tag. That park, particularly in area’s with a low amount of players, could now have no spawns, even with a gym or stop present. By adding the overlay for parks in place the park could get it’s spawns back.

Although I don’t know what the OMS update frequentie is, it might take some time to work out. Eventually the map would not be wracked, but Pokemon go players would benefit.

I’ve had a spawn point for 36 hours now and you think they should take it away again?

If its for the greater good? Yes.
I havent checked our normal CD route yet (didnt have much time last few days) but i really hope its still intact. Based on what ive read here and there, its not looking too good.

@Robdebobrob It’s unfair to crop a person’s words so the context of the original comment is lost.

Further to your point - and leaving the spurious notion of the greater good aside - if a group of people have had an advantage over others for a period of say two-and-a-half years and then the situation is reversed, then those people who have lost the advantage do not have a legitimate complaint until they have been disadvantaged for the same period of time.

The reality of the situation is that Niantic should have removed less and adjusted timers if they did not want to increase overall spawns but still create new spawn points.

Even as a beneficiary of having multiple spawns at my home I think it was a poor decision to make such a sweeping change. That being said most players don’t have much to complain about as we still still have plenty of access to good spawns. For those who did see a dramatic decrease in spawns hopefully Niantic will remedy the situation.

I can’t wait until my first full day at work tomorrow with all the new spawn spots. I only got quick tease Wednesday afternoon.

Wow. you are taking this WAAAAAAAAAAAAY to serious…
About the cropping: Hardly. It pretty much covers it all, and your whole comment is both viewable about 15 comments up, and under the clickable “↓” in that same block quote.

About point 2: No thats not how that works… If half of the total community loses its park spawn points for example just so a handfull of players can get home spawn points it really isnt worth it in my oppinion.
If it turns out our local park now suck cause of this, ill gladly revert back to the way things were and lose my extra home spawn. Ill even sacrifice the 2 i had before. Home spawns are overrated. Id rather have an interesting 3 hour CD out and about with friends than a few useless spawns a day that really dont give that much SD.