Mewtwo will be back in EX Raids on 23 October..😑 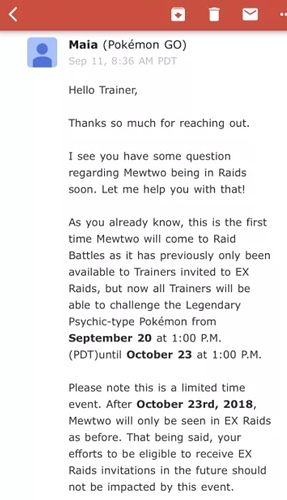 They cant be serious, I really hope its a lie to shrug off any speculation
Why would drive long distances to get something they already have caught more than 30 times?

LMAO. Niantic is on dat gooood.

They really don’t think these things through do they?
If MewTwos returning after the event finishes the whole Ex Raid system will be dead. I know I won’t bother to chase and Raid the Ex Gyms like I have previously for some thing I will have so many of only to not be able to do some due to unsuitable times midweeek.
Are Niantic really that arogant they thing things will just go back to the way they were and the masses will still blindly chase Ex Raids.

I might not find a group during the month…
And then after that I might get a pass, which could guarentee players will be at the raid…’

If you can’t find/join groups in the month of open Raids you going to struggle to find them after even if one does get triggered. There will be much less incentive for people to make their plans around one set date time if it’s remotely unsuitable.
If you haven’t be getting and doing them now you sure as won’t be later but good luck with it.

But it is good I see why you raid it

i wish they are bluffing against any speculation regarding deoxys!!!

If it’s true, maybe Mewtwo can then finally be shiny?

Give everyone Mewtwo. Then release Ex pass shiny mewtwo availablity. Niantic scheming up.

I can’t get a great IV MewTwo from Ex Raids, I have no hope of getting a Shiny one

Outside of the CD’s and Legendary returns I have a lot more 98% Pokemon than I do Shiny.

Not me…i cant possibly have any type of luck in this game.