Mega Evolution a cool concept that was introduced on Generation 6 of Pokemon. The popular game Pokemon Alpha Ruby and Omega Sapphire introduced us to many species that can mega evolve such as Blaziken and Gardevior from Gen 3.

Mega Evolution furthers the Evolution of certain species of Pokemon for a short period of time. To mega evolve a Pokemon, trainers must follow some rules including owning mega evolution stone. With a strong bond between the Pokemon and the trainer, finally the Pokemon can Mega Evolve.

Pokemon like Charizard, Blastoise, Slowbro and even Mewtwo can mega evolve. Mega evolution would boost the Pokèmon’s stats and also change its appearance. For example, Mega Charizard X is a black Dragon type pokemon that breath blue flames out of its mouth.

Gen 6 is still far off but there are still possibilities that Mega Evolution would be introduced a lot early in Pokemon GO. One big reason I can think of is the fact that with the release of Gen 3, there will be so many species of Pokemon that can mega evolve made available in the game. But before Niantic can even think of having this feature be introduce in the game, they would have to implement some new systems and just plainly update the old ones.

1) Battle System
This is a no brainer. The current battle system needs change. While I believe we will see change, I would also not be surprised if Niantic decided not to change much of the old but just to improve it while adding some new thing. But do not worry, my idea will work even with the current battle system.

The buddy system in Pokemon GO right now is underused. Other than to just get some candies, we use them to evolve our Eevee into Espeon or Umbreon and thats it. I want this system to be updated. I want, instead of one, what if we can have Six (6) Pokemon as our Buddies?

Lets for now call it the Squad System. All 6 Pokèmon would be our default squad in every battle so thats one of the other uses of this system.This system works the same as our current buddy system but, this time there is 6 Pokemon that we can bring along on our walk. Obviously there is a catch for this seemingly overpowered system. Every Pokèmon that we set up in slot 2 to 6 would need extra distance to finally get a candy.

Maybe the new distance we need to walk = 1.5*(Current walking distance). For example, walking Geodude at the second slot would need 1.5km instead of 1km per candy. If Niantic wanna double it, its all up to them. Only the main (slot 1) Pokèmon will appear in the trainer page just like the current system and the Pokemon get to retain thier original walking distance.

But that is not the only use of this system rework. Will we discuss a bit more about this further into this article.

1) Pokemon Pocket
This is a small upgrade to our pokemon. With this system, we can place potions and some other items with our pokemon. With potion, the Pokemon would have higher chance of using the item when its HP gets to lower than a certain point.

This system is so small that I should include it with the Battle Rework but since we are talking about Mega Evolution, I believe that we need to really focus on this system. Well, this pocket would be the place where our Pokèmon can also store the mega evolution stone.

This system kinda exist now with Eevee evolving into Espeon and Umbreon just like I mentioned earlier but thats not good enough. For mega evolution, friendship or bond between the trainer is really important so thats why introducing this system is a must.

This is how we build our friendship and love with our Pokemon.

The idea that we can release our pokemon the on the map and feed them while petting them is amazing in by itself. This method will be used to increase our friendship level with our Pokemon. There is also a probability that we can train (mini games) them with this system. Think about it. The best part if you ask me, this is the only system that can allow us to play Pokemon GO at home and be rewarded.

This is when the Squad System came in handy. We can walk with 6 Pokèmon at a time and increase our Friendship Level while doing it to all 6 pokemon. So might wanna rethink of our squad strategy. This will not waste our time plus this will make the new Buddy system very useful and awesome.

Walking and Petting should be a must if you want to establish an unbreakable bond between you and you pokemon. The Friendship system should balance its need so that it would be a lot more challenging to actually get you Pokemon to 100% Friendship level.

Petting would only add 50 Friendship points so that no matter how much you pet you pokemon, you would still need to walk 50kms to get them to Lv100 friendship. If there is no limit in petting, people will get to fill up the friendship points way to easy.

How Mega Evolution should work in Pokèmon Go

Put the mega evolution stone in the pokemon item slot (that I talked about previously) and put it into battle. After that, trainers can choose when to mega evolve their Pokemon mid battle. A button should appear at the bottom left corner of the screen while battling and the button pressed, the Pokemon will mega evolve.

After the battle our Pokèmon would revert back to itself and this process can be repeated as long as your Pokemon are at lvl 100 Friendship.

The friendship level should work like motivation in gyms. It will decay if not walked with or pet properly but it decrease very slowly as Pokemon are loyal creatures.

Conclusion
So thats it. While the idea of Mega Evolution excites me, I still believe that we need a lot of improvement im this game so that this feature can be done correctly. So many other things can be added to make this system more fun but for now, this is it. I want to know your thoughts so please share it down below.

So you also suggested ‘Friendship’ as a new system/feature. …seems like I need to hurry up on writing an article. I’ve got 2 more competitors/companions within 2 weeks. @leonk98 you should at least give youself a shot to write an article. Let’s cooperate!

Note: @Dinsara92, @Klasser, @ElectroBlade have written articles about futurism. Now it’s left for me, @leonk98, @Law2010 and some more people who are full of innovative, realistic, unique insight.

@Yoshi I will probably not write an article, but I do like to comment from time to time.

Hmmm Interesting! I would like to send them in different directions when out for a walk and find me goodies … scanning, berries, candies from fighting with lower level mons(maybe come back for potions as they get injured too) spin a few pokestops(never mind

). Correspondingly tell you too, get up and get going lazy bones.

I like to speculate stuff. Its fun. Futurism is my type of read and I enjoy all of the articles and decided to write 1

Let them wander randomly within a a restricted radius (e.g the white circle in the attached) from where you are & engage with other mons within that area (e.g the red dots in the attached). 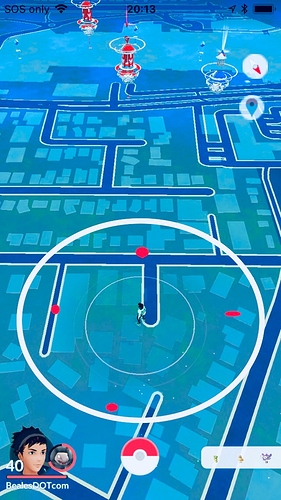 @Dinsara92 I totally agree with your ideas.

We still have a long way to mega evolution. (~5 years)

Maybe, I thinks its possible that we will see it early 2020

The one I mentioned in the article? Haha. I like that too. Theres also Mega Rayquaza ,Mega MewTwo, Mega Gengar and some others who looks quite cool too

Bringing the friendship system will surely take a toll on the patience of spoofers can’t wait for that to happen.

Yes it truly will

I agree that Pokémon Go has many ways it can change and new things be added yet, the Mega Evolution theory might be a disappointment only being able to use it once. Spending all that time and care for your buddy is key if your going off Pokémon originally, and have to use it wisely during battle only to have to start over.