Time to get that new form!

Got the pass did you?

Can you attend your raid?

Didnt get a pass but i can get 2 invites from friends so ill do atleast 1, maybe both.

I was a little surprised that I did, but hey, I’ll take it. This will get me the Defense-Deoxys.

Do you have one in Rijswijk?

You can only get them for one day or the other. The days are static within a time zone.

I know, but I said it because TS asked specificly for the 27th and not for the wave for the 27th/28th. 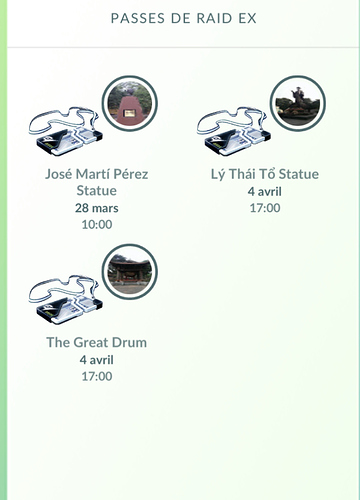 Unfortunately not. I’ll only do one out of my 3 passes since the one for tomorrow is at 10 am (I’ll be at work) and the other two are at the same time and very far apart (one was the one I received today, and the other from a friend’s invite).

Got mine at 1pm tomorrow which is ok as I’m on afternoon shift this week but its 40min in the opposite way I go to work.
40min trip to go do Raid then 1hr 15min to get to work after Raid.

Aw. Hopefully that’ll be worth it and you’ll get a decent IV Deoxys then

I expect to get a rubbish one but don’t care as all I want is 2 of them then I can forget about chasing Ex Passes until the last one finally gets a turn.

Agreed. I really don’t care about Deoxys to be fair, it’s not meta relevant (I don’t really do PVP, unless I want some Sinoh stones). And all 4 forms are already in our Pokédex, so…

That’s certainly sub-optimal, @NotanotherKangaskhan. At least your time commitments are compatible with the logistical inconvenience, though. In a similar vein, I and several in our usual EX group are sometimes able to trade the hour in the middle of the day for one at the start or end of the day.

After months with an EX raid boss that was way too easy, it’s kind of nice to get a boss that demands we pay at least a little bit of attention to the fight and our preparations for it.

Just finished today’s EX raid. Though it was raining, most invitees showed up.

The Defense form of Deoxys was harder to defeat than the Normal form, and significantly harder than Attack form, as was predicted here at the Hub. But both of my trainers got invites and both got the capture, one with 89 IV and the other with 96. Move set was Zen Headbutt and Thunderbolt. Waiting to see how Poke Genie rates that, once it has that charge move added.