Incoming Celebi…? After Zapdos? possibly tonight or tomorrow? It’s the Professor’s birthday. Are we getting a surprise??? 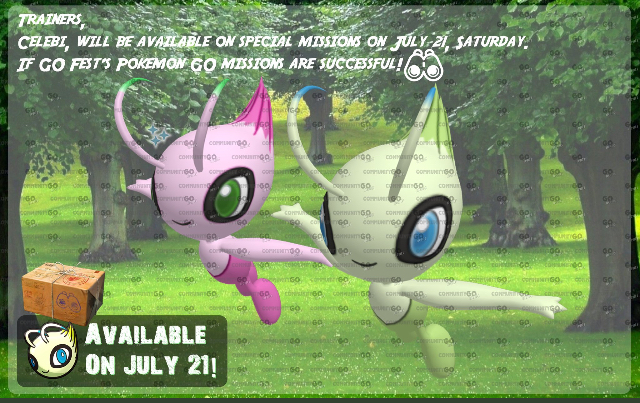 I hope so. Most of us have finished the Mew quest

The gofest mission reward was Zapdos wasnt it? If Celebi is released now its just becuse it is… Its not like they would NOT release it after the people at Gofest gotten the chance to get it.

Should be today / Tomorrow, but the day is basically done.

But I hope that instead of the unown stage like gofest, they replace it with something easier i.e.’make 3 excellent throws in a row’ or something like that

Still no celibi. Possibly coming september? how many months will it be to make it fair for the Go fest trainers.

or they judging it by how long it take a Gofester to get Celibi, some could probably not even have it yet, i guess.

Well if they dont have it yet they probably wont get it at all if they are stuck on part 3. Catching 7 unonws isnt something you do outside of an event.

Rumor has it it will be the ultra reward after we complete the achievements for the Japan event. I would think its a lame reward cause Celebi would come eventually anyways, but since it hasnt been released yet i think its plausible