Not a bad CD for me. Four shiny Chimchar, none of them had great IVs but

Also managed to get two Galarian Weezing raids within 5 minutes of CD finishing so that was a bonus, both with full lobbies.

Took me 3 hours to get the same 8 shinies. But at 11:00 I started the game and the first CHimchar I tapped was a 96% shiny one. So that’s my BB Infernape now.

Forgot about Community Day. I was too wrapped up in playing Pokemon Shield.

I didn’t forget about it. Just not worth doing if my son isn’t here. He went on weekend trip with wife and daughter, so I was like, F it. He got in trouble today with his mom for playing Sword instead of doing his homework. Lol

I finished Shield yesterday. I could have done it sooner, but I was enjoying wandering around the Wild Area. Now I’m filling out the dex (I’m up to 350) and just unlocked the IV calculator so I can see how good (or bad lol) they all are.

Nice I’m at 230, definitely could have finished it earlier but I had other commitments this past weekend

It was quite good, but we called it a day after we both found at least one Shiny, and we both found the same hundo as well (non-Shiny).

and may the shiny odds be ever in your favour

Played for just one hour because it is too cold. Captured 2 shiny bagon and 2 shiny slakoth

Doing the same, but going home without shinies…

Ended up getting 14 Shinies and a (full-odds?) Shiny Chimchar.

I spent my whole CD walking around rather than camping on a group of Lured Stops for something different. Got 3 Shiny 2x Swinub and 1x Sloth in the first 20min then never saw another Shiny for the whole CD. Bit disappointing tbh form a game point but I had a good day walking around where I was.

Lets hope for the same sort of luck tomorrow

Aren’t Pikachus evolved today supposed to get Surf? The one I evolved around a quarter past 11 came out with Volt Switch / Thunder Punch.

Got a few of the feature Pokémon (e.g. Treecko, Torchic, Bagon, Slackoth…) during the 11-to-2 period. Got exactly one shiny (an otherwise-mediocre Totodile around 1pm).

Even though I didn’t put a huge amount of effort or vigor into this CD; I still felt afterwards like I got less than I put in. Oh well - not every event is a bonanza for every trainer…

No Shinies today. But did finish that catch 19 pokemon quest

I went to an ethno village in another country today so I could only play when connected to Wi-Fi. I caught about 30 Pokemon there and got only one shiny - Chimchar. Tomorrow I’ll be home and I’ll be playing the whole day.

I missed 45 minutes thanks to traffic delays and inclement weather. Caught 8 assorted shizzlies - as seen in the snap below… nothing good to report IV-wise. Gonna get than elusive shundo tomorrow 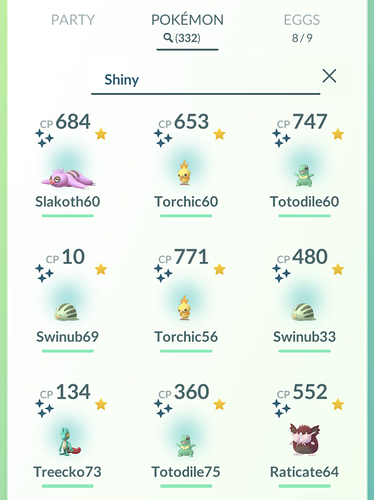