I lured up the stop closest to me, popped an incense, and then continually caught for about 3 hours. Shinies were plentiful, and I finally evolved my hundo Seedot (though I wish it would have gotten a better event move than Seed Bomb, after waiting a year to evolve it).

Buddy assisted frequently, and brought me 50 balls every half hour, it seemed. Maybe feeding it a Boffin made it more eager to please.

I decided halfway through to do the special research and rushed through that in an hour. All things considered, Seedot Community Day was pretty fun.

I have caught ONE shiny, not so bad without leaving home…

I played 2 hours during the event, used 1 incense and got 3 shinies and several good-IV Seedot. I did the special research. I could play outside this time. It was fun, I like this kind of events. It’s great that Niantic made incense much better than it was before and that we have more time to catch Pokemon. 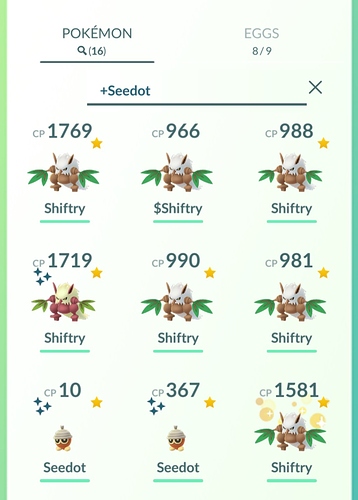 Good luck everybody, hoarding those yellow weedles. And may the shiny odds be ever in tour favour!

For those who couldn’t login due to the Android 5 & 6 bug, I made an article that hopefully saves your CD.

This new version Introduces a lot, but this is just about it being a fix for Android 5 & 6. And how to install (on all devices, 32-bit & 64-bit except Xiaomi/Redmi/Poco MIUI users) There currently is no version for the Samsung version of Pokémon Go, but it will be uploaded soon I hope. But you can install the Google version on a Samsung. Some might know what to do with the APK-bundle. For those who don’t I made a small instruction. I tested the mentioned apps and as far as I can see, they are…

But the shiny rate for me was insane. Played solid for four hours and then got pretty bored to be honest. According to my pokedex I saw 224 over those four hours.

I spent the first three hours at home and had a 1/37 Shiny rate. After that I went to a big city nearby and even though I didn’t constantly walk I somehow managed to get a total of 36 Shiny Jormdeworms, which is my record along with Abra. Quite surprised I got that many! Haven’t calculated the final rate yet but I think it did go up to 1/25. 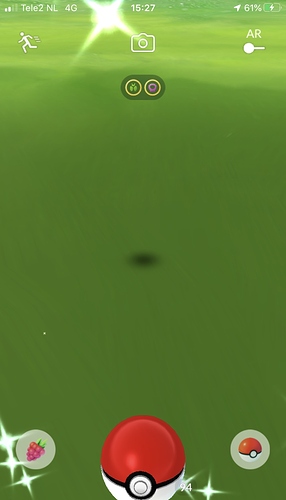 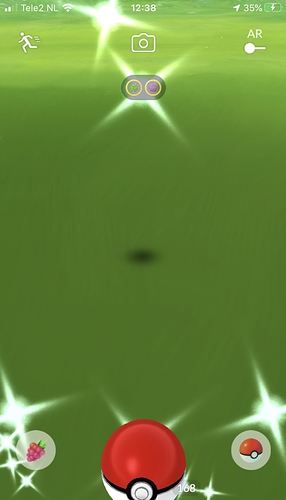 Edit: my final rate is 1/23, which isn’t 100% accurate as I took a screenshot of the Pokédex a few minutes into the event. During the event, I encountered 811 Worms.

Absolutely loved Jormdeworm Community Day! I honestly hope we’ll get Caterpie and Wurmple Community Day, too. Especially since I can’t find their Shinies in the wild😕

For me first hour was ZERO…

More than 100 catches - and no shinies at all.
But I used two incenses and I was clicking my pokeball for all 6h (re-connecting it several times of course…).
And ended up with more than 20 in the end

What’s more it was the very first Community Day when I got Hundo - in last 5 min!

Here are two bees at the end 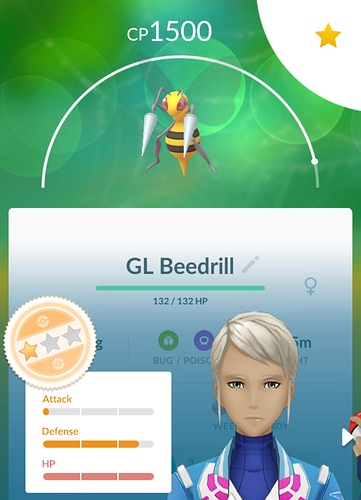 Played a little over an hour before I had to go to a graduation ceremony with some friends. Got 7 shinies, but more than anything got reminded why I have so little desire to catch Weedles. The annoying little jumpy, jerky, fidget twits are way more trouble than they’re worth, once one is past the phase of mass-evolutions for leveling-up.

The only reason I played longer than 5 minutes was the triple stardust. For that I might do another hour after graduation’s over.

– Did the last hour and got 5 more shinies, the best being a 15-14-14, CP 412.
Got called away and missed evolving, so I’ll do that at the end of the year to get the Drill Run move. There were a few others worth evolving.

The best part was gaining over 120,000 Stardust from catching all those stupid Weedles.

At first, I played at home because the weather was bad. I used incense and got 4 shinies out of it. For the first time I found 3 shinies in a row! 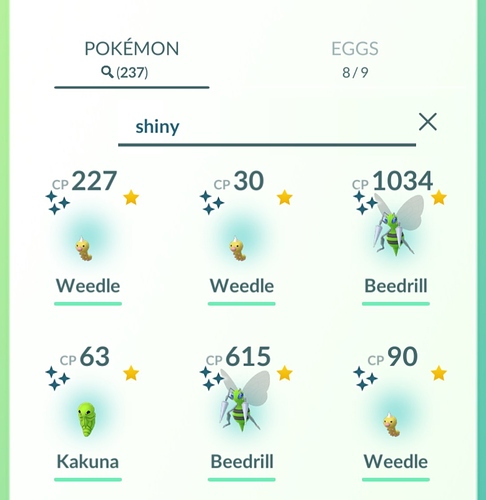 Did the first 2 hours at home, then walked arround for an hour with friends and did a raid, then went back home and did another 2 hours. Most were caught with the GoPlus.
I ended up with 12 shinys.
Evolved a few weedles wich i think were ok for GBL after i glanced at gostadiums top list. Ill have to check those later.

I just couldn’t get excited about it at all. Due to that rather than going to any of my usual CD play spots and sitting on a bunch of Lured stops I decided to Chase Zekrom Raids for the afternoon on non Gold Gyms and let the Go Plus catch whatever.
Picked up 6 and evolved my normal 100% I had in the bank.

I played similarly to the last couple CD (Seedot and Abra), caught 9 shiny, the best is 89% IV with 15 attack, and it evolved io shiny Beedrill. Also evolved the hundo Weedle to Beedrill as well.

Also it seems like the catch rate of Weedle did not increase during CD hours, still jump alot and break out like normal.

I was really busy yesterday. I used 1 incense, and I stopped after 1 hour, when I got a total of 8 shiny weedle.

Overall those numbers are pretty good

21 shiny Weedle, one hundo I transfered and a 86% GL shiny and tooooons of dust (brought up like 3 PVP Mons), good one

Somehow right after community day ended I got carried away by life (cooking, housework, other work,…) and didn‘t get to post here.
I played one incense long, again first about an hour-long walk and then from home. I plussed a lot, because I got quite annoyed by those Weedle jumping around…
I ended up with 12 shinies, about 200k dust and two special move Beedrill (one with good IV, one for PvP).
It was ok, and I‘m somehow getting used to this kind of Community Day, but I miss meeting my old PoGo group at the park.
I probably won‘t play for Ghastly in July, but I might meet my group again for GO Fest. Our local laws and regulations allow it (with proper individual distance

Well well well… not bad at all! Gastly did not disappoint!