How to search storage for just one form of Giratina

But now that Giratina has been featured multiple times in the game, a simple chronological search of our storage can’t be enough to look only at our collection of just one form or the other. Trying to identify which of the new catches to keep would be a lot easier if I could filter the Origin Forme clutter from the search results. But how can I narrow my search to just one form or the other? The only way I can think of would require a HUGE string to list the date range for every event that featured it, and that’s so daunting that I don’t even want to test it to see if it would work.

With other Pokémon coming in multiple forms, it’s a question that could affect multiple mons…

Maybe I don’t understand everything, but I think if you first sort by date and after filter by Giratina, you will see exactly this effect, joint by type of Giratina.

Thanks, @bagguille . That was the only solution I could see. I was hoping for a way that could avoid the complexity of identifying best from date-sorted sets, plus the tediousness of typing in the search string with multiple date ranges.

Maybe you could nickname them A1, A2, etc for altered forms and O1 etc for origin forms?

Am I missing something here?
If you just want to sort the forms you can just type ‘girat’ and sort by NUMBER.
Sure both forms will be displayed - but at least each forme will all be grouped together… 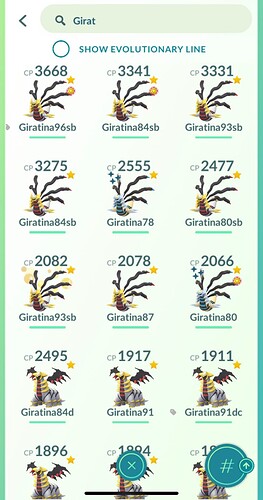 Yeah, that’s what I thought too, like Spinda which has so many forms released by now

That appears to segregate them neatly… mysteriously, though, since GO Hub’s db lists both forms as #487.

Is the difference between forms that permits SORT to distinguish them something that can be used by SEARCH to show just one form? If the game can sort by-number, is there a way to get it to DISPLAY the number?

As @Mew1 states this same technique will sort your Spindas - and also your Pikachus, Raichus, etc. - into their myriad costumes.

Thanks for the info, guys. If that sort-by-number method is the only way to achieve what I’m seeking, I’ll have to make use of it. But it apparently uses some property other than number that remains hidden from user view, and of course is wholly undocumented. Yuck.