General Chat - How do some people already have certain pokemon

Hopefully the game will improve for all…

Everybody can spoof for f*cks sake, stop spamming every single topic with your nonsense

some people spoof, which is just stupid to me, whilst others have tons of rare candies and dust. so if you hatch a 98% ralts that’s like 20 to 30 candies right there. throw in some rare candies, dust and bam. you’ve got your gardevoir. oh and a lot of people use trackers which is seen as being just as bad as spoofing but I don’t think so. spoofing is what bothers me. using a tracking map somewhat lessens the experience but I think it’s OK.

Trackers are just as much cheating as spoofing tho

No they’re not. To Niantic cheating is cheating but to the community spoofing is the lowest form of cheating since it gives you the power to be anywhere, anytime.

To Niantic its exactly the same, and with trackers you cant help other at raids
Tell me, dont you use trackers? Would explain why you are trying to justify them so hard

@Necrozmadabest Stop being so argumentative & try contributing with a little more positivity in the forum. If you’re young, grow up, if you’re older you should know better.

Alright, sorry, I just dont understand how can one people bash spoofing so much yet freerly use trackers

As someone who has used a tracker in the past, I can kind of see the point. For example in my town many of the good spawns are not near Pokestops so a tracker is useful to know whether it is worth it.

I am not against spoofing as long as it does not directly influence other legitimate players. As long as you don’t mess with the gyms.

Yeah I use them but I’m not justifying their use. Even if I didn’t use them I’d still say there’s a difference. Yes it’s still cheating but clearly a spoofer is much more of a threat than a bot that’s purpose is to scan. But let’s just drop it because we won’t see eye to eye on the subject.

If you grind the game like crazy and have a map that helps. That is what I do and it pays off for completists like myself. For example yesterday I grinded and rode around for 5 hours and evolved a metagross only hours after this recent group was dropped. 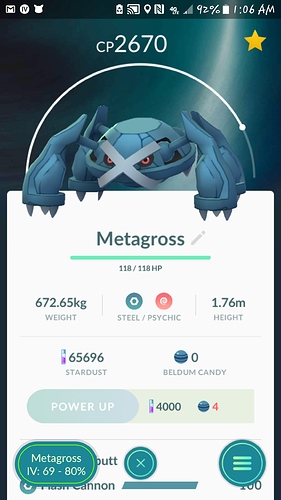 I have two Wailords with one being perfect IV, 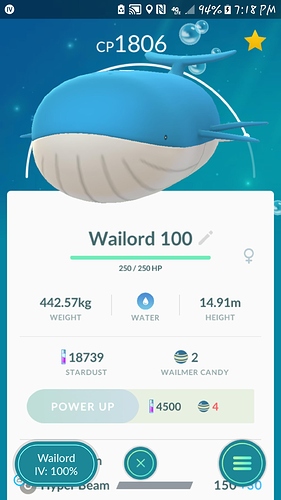 6 walrien, 3 milotec, 1 perfect feebas with about 80 candies, 4 Gardevoir with one being perfect. It is doable youjust have to grind, find nests and maps help.

I still love it though.

@CyberBishop1 how do you get that thing saying Wailord 100% in the corner?

It is an IV checker called GoIV offline

From gen 3 I only have Metang, Kyogre, Hariyama, Swampert, Armaldo, Walrein and Blaziken​:laughing:

(Yeah got more but these are the better ones I have)

Still have no gen 3 shinies

whats the name of that site?

cheating ain’t cheating
100IV for everyone

It’s also a matter of know-your-biomes. There are usually Wailords, Feebas, Carvanhas or Magikarps at my nearby riverbanks, cannals and moats, so whenever I go for a walk past those, I tend to pick up a couple.

I know of players living right next to a moat. They can simply sit on the couch at home and pick up several of those fishes in an hour. You should’ve heard them complain when they walked a Feebas, and then found a way better one (while I still had to catch my first one

) , meaning they had to go walk again.

But, they also managed to evolve a Wailord within a week, and could get another one on a weekly basis if they wanted. I’m still saving candy for evolving my first…