For gyarados it made sense because it’s both a powerful pokemon, and in the actual games (without using an exp share) it took so much extra effort to level up a magikarp (since it learns almost no damaging attacks). Both Wailmer and Swablu, while not outstanding, learn plenty of damaging attacks that allow you to level them up.
I think the reason Wailmer and Swablu cost 400 is because Niantic saw how many people liked doing Magikarp raids and figured they could get more people to purchase more raid passes if they had more high candy cost T1 bosses, which all three come in shiny as well. Also, altaria is a dragon Mon. I don’t think Niantic wants people swooping up dragon badges buy evolving swablu for 50 candies.

Switching out didnt take much effort
Yes, he had slow growth, but you still get it at level 20

True. We also got red (shiny) pretty easily. Just trying to paint a small picture of why we were possibly having to use so much candy. @Necrozmadabest

A better question would be why does altaria cost 400 candies to evelse. It doesn’t make sence

The best question will be, “What do you mean?”

That isn’t a word… did you mean Its

Who cares? Wailord is the same amount of candy to evolve and his CP is just as low as Altaria.

He sais that it’ll be a better question why Swablu needs 400 candies to evolve, and then he sais that it doesn’t make sense. That’s why I asked that

Swablu should really cost 50 candies to evolve imo. Same with wailmer. That’s if they want to keep the pattern going. I’m glad they made it 400 because it makes it more of a challenge 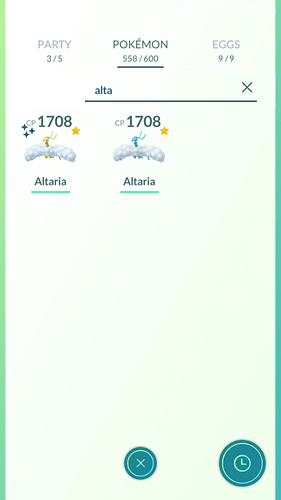 What does this have to do with anything?

Read between the lines stop wanting everyone to type correctly.

It has a Mega Evolution later on down the line.

Niantic has started to figure out which basic mons have multi evolutions down the line and have adjusted to that knowledge. That’s why onyx is so terrible right now. Prob the real reason behind crazy costs. Flavor wise… i would say to turn a small bird into a dragon would definitely take a lot of magic candy.