Saying Altaria is nerfed means it does not reflect the game. Also im fine with seeing same mons over and over i honestly dont care which mon i fight i always use the same mons cause Surprisingly the Strong mons are my favourites

edit-
My point is that they are not reflection of real game. Nerfing is not in real game they are already set. Using nerfed stats which you wanna use so that weak mons have a point is actually blasphemy. Weak mons are weak cause their weak. So making a strong mon weak makes it better cause you want variety?

And stats are pointless since you dont see nor know them. It calculates the CP but the CP is low and that being said nerfed. If it is nerfed it isn’t reflected correctly. Increasing the stats to what they are suppose to be will increase it’s CP. Me liking CP means that ill get what i want and you get your magical correct stats.

But nah lets nerf and make everything equal when it’s not suppose to be fair and if that leaves out certain mons then so be it,?they were most likely always left out due to their “stats” in the “Real” Pokemon

edit2-
No one said he was inncorrect about an entire type being nerfed. But when i say it it’s a problem😭 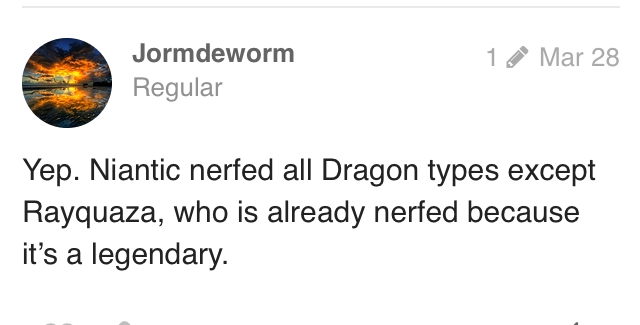 Mega Altaria, It might have a bigger Cp.
I may be wrong

It would havs to. Since it’s “stats” would be increased dramatically. Or is his cp only going up 5% lmao

When did niantic nerf all dragon types? Maybe I missed something but Ray was the only one who got the stat nerf like the rest of the weather trio.

It will have higher CP as it gains 40 atk stat, 20 defense, and 40 in Sp. atk. Its actually versitile in the games but most use other megas.

I don’t know. I don’t watch stats or any of that cough since you cant even see it.

So @Jormdeworm would need to answer that.

But another note: How do you know what the stats are if their nerfed. You really doing algebra i guess😭 I don’t got the time for that. Like i have stated many times “Stats” or should i say “base stats” well any type of “stat” should be shown. Cause without seeing it you don’t even know the numbers. Especially if your nerfing. Idk bout Altaria or even care for it as a Pokemon, just a good discussion that can be used on any Pokemon that has a bad CP.

In Nerfing all Dragon makes it fair? welp

ya there no way you could see it in the ingame app unless you data mine but you do not need too. No need to do algebra since sites already do it for ya like this one does and many more. All it takes is clicking twice and you get all the info. You can tell what stats are before they make it into this game by going by the original games and using niantics formula.

Cant use those video game stats if something is nerfed.

edit- shouldnt need to use a site or third party to see stats.

Its only because its a feature niantic has not added yet. You actually can since you can go by the game stats and deduct it by a percent after the total original is figured which is what niantic did.

Dratini/Dragonair/Dragonite = Nowhere, 10K.
Bagon, Shelgon, Salamence = Same.
Altaria = 400 Candies instead of 50.
Kingdra = Dragon Scale, which is the most uncommon Evolution Stone in the game atm.
Rayquaza = Only for a limited time and obtainable via raid battles.
[email protected] = Same.

I don’t think I meant ‘nerfed’ but they’re all not easy to get. No Dragon type Pokémon. So that’s why I wrote that down.
Maybe I could correct it in:
Dragon types mon are all very difficult to get.

My bad.
I hope you understand it now?

Ok that makes much more sense I just didnt want people to get the wrong info and think all dragons were nerfed like 5Godlink. Ya sucks they are so rare but they deserve it being such pseudo legendary mons. Except for kingdra maybe it will get love if they introduce special abilities.

I think @5GodLink also knows that’s not true. I just wrote down a wrong word. But I guess everything is clear now.

Also for pseudo legendaries they are too rare I find. Sometimes I see Beldum. Never saw Dratinis or Bagons without Weather Boost since.
And also with WB not much. I don’t even see many Swablu!

Ya I did not even catch a wild dratini before the CD. I saw a few during the kanto event. I have caught 1 wild beldums but no wild bagons yet. Then again 90% of the days its sunny here plus a desert biome. Really during the release of swablu for like a few days they where everywhere then disappeared I think it was a release event if I remember.

Rare. Altaria mega evolution up next.

I hope that we get a cp rebalance, valuing defence, hp and attack equally

For all those saying its CP is too low, ask yourself, why does it cost 400 candies to evolve. Magikarp and wailmer make sense, but swablu?

How does Wailmer make sense but not Swablu

Makuhita gets a lot bigger as well