I like to name my Pokemon for fun as well as for keeping track of how many I have. I first was only going to name my Vulpixes, but most recently decided to name my fire types. I noticed that all of my Houndours are females. That rottweiler-looking Pokemon looks very masculine and I thought ‘Rex’ would be a name for one of them, but none of them are males. I have 6 Vulpixes, 4 houndhours, 5 charmanders, 3 Cyndaquils, and 1 Castform I named ‘Binky’(it looks like a baby toy). The names I chose for my Houndours were Stella, Pepper, Jasmine, and Georgette(names I heard people name their girl dogs). I named my charmanders(all boys) Charlie, Buster, Fred, Sizzles, and Blaze. I named my 3 Cyndaquils(2 females, 1 male) Pokey, Cindy(I know it’s kinda corny), and Sparkle. I already shared, but my 6 Vulpixes(5 females, 1 male) are Ruby, Scarlet, Vixey, Ginger, Penny, and Tails. If I were to find another male Vulpix, I would either name him Tod(from ‘The Fox & The Hound’) or Lucky.

I only name my 666 CP Pokémon and just give them devil themed names.

Update: I got my 7th Vulpix and named her ‘Star’. I cannot believe my luck with all these Vulpixes popping up in my area! I also found a new Houndour and named her ‘Rogue’ and a new Charmander and named him ‘Jojo’. I evolved my first Pokemon, one of my Charmanders, Blaze has now evolved into Charmeleon.

I used to do that, but I mainly use the more industrial version of naming (every move, IV and level in the name)

I do name them with their IVs and occasional hints on their attacks if needed.
I can only remember two Pokémon with “real” names I ever had in PoGo. My first Shinx was named “Kimba” because it reminded me of Kimba the white lion from an anime series I watched as a kid. And then there is one of my Cranidos. I rename it to “Pachy” when I walk it as a buddy, as a short form of Pachycephalosaurus… I’ve been a real dinosaur nerd when I was young, and I never completely got rid of that…

The Mons I max out get their own names, however

I thought ‘Foxy Cleopatra’ would be a perfect name for Ninetales. I initially tried naming my 7th Vulpix that, determining it be the one I will evolve in the future, but there is limited space and the name was 2 or 3 letters too long. I’m thinking about naming my next female Vulpix ‘Princess’ where it would be the one I plan to evolve because once she is to evolve into Ninetales, her name would then be ‘Queen.’

Whenever the numbers start getting too high, I will eventually switch to calling them by their species name and put a number next to it, for example: Vulpix # 32.

Here an example of my way:
First number % of IV
Next three Attack, Defense and Health
Next the Gender
And last the Level 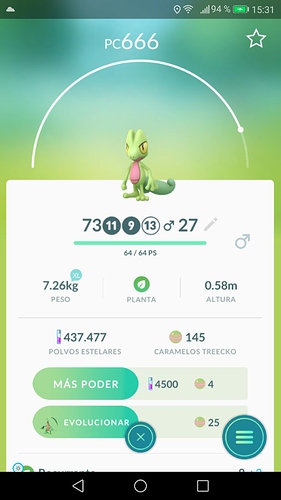 Sorting by name with that system sorts everything by IV, then, right? Your 73 IV things are all together, yes?

Yes, it works this way