So ihave the 87 IV scizor, sound cool hay?
But he is only level 20, bummer

So my question is should I power him up to level 30 (75k in dust) to be a super duper mewtwo killer or if he over rated?
Anyone have experience of battling the bug Vs a psychic raid boss? 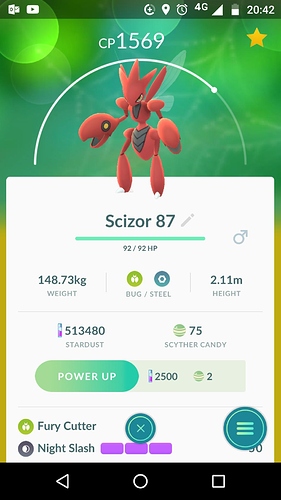 This is a solid counter for Mewtwo, but personally I wouldn’t power him up for this. If the IVs were higher I would be on board but he is right in that spot where he isn’t as strong as others and his IV isn’t quite as good as some others. gyarados is stronger as is tyranitar so I would focus on those first.

Thanks man I did not even think about Garry!
I still need one of them big dinosaurs they look boss. 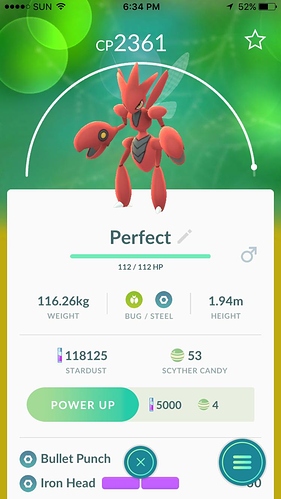 Why can’t I upload the appraisal??
To answer your question, I don’t like bugs. I have 2 Tyranitars with bite and crunch and 5 with bite and stone edge. Wasted a lot, A LOT of TMs

I have an 84% IV one with Fury Cutter and X-Scissor - the damage output is large, despite being listed as 95% maximum for the type - it’s the rate of attack that’s rather extreme. Still it’s really only for dark/grass/psychic types so limited in scope (having said that it also seems to shread Snorlaxes).

Got a second one but with a mixed move set so won’t power it up, and a scyther waiting for enough candy to evolve (not going to buddy it).

While it’s not got the gretaest hits - it’s resistant against most attacks and only weak to fire.

What level is your bug? Mines level 20 but was thinking getting it to level 30 would cost lots if dust 75k 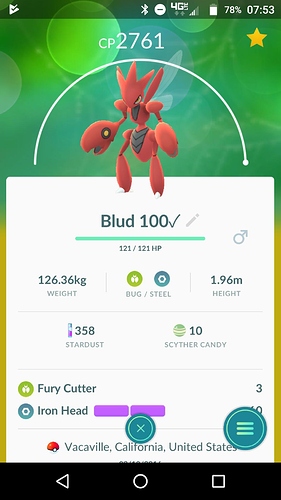 Yeah, I’m valor. So pure look and style wise he is my favourite max out. He destroys ttaur, rock bastards, and quite a bit. He’s going to tear into Mewtwo something vicious.

I’d switch out the charge move, then it would really destroy.

I was like. Whaaa? Then I scrolled up. You must been talking to op.

I like using pinsir against psychic and grass types. Fury Cutter is so OP!!