Darkria has so far been the most difficult T5 to take down in that it needs more trainers than anything anything I’ve done before. This has been a little refreshing imho.
Here’s a thread to show off your catches and tell of your success or failure.

To start of the below is only my view and observation so far.

Poorly prepared Trainers will need to be part of larger groups than they could skate by with previously. Doing a bit of prep work on building some optimal counters is a must if you want to do this Bad Boy with as few Trainers as possible.

To put it into context I Raid with the 5 same Trainers most of the time. Those 5 are a mix of very well to well prepared in terms of optimal counters of the first 6 choices and where they are leveled up to. Those 5 Trainers we smash most T5’s out depending on weather boosting with 120-170sec remaining.
From the 4 Darkari we’ve done so far we’ve taken a lot more time. All accts have 6 Machamp powered from L35-L40. We go with auto game selection after that. We’ve done all 3 Charge Moves so far with Shadow Ball being the hardest by far. None of the Darkari were weather boosted in these 4 battles with results as follows:
33 sec remaining on Focus Blast
59 sec remaining on Dark Pulse
3-4 sec remaining on Shadow Ball.
Shadow Ball was burning more Pokémon and the only requiring 3rd teams on a couple of accts.
Some more work Powering up those auto selections or more optimal counters might be on the cards I think.
Going to need more Trainers for weather boosted Darkari.

I’ve done four so far and caught all four, and I’m freshly annoyed that he likes to attack from the sides of the screens. Taking it down is simple enough–provided you have enough people and great counters–but catching it is a chore because accuracy is a must and Darkrai loves hugging the side of the screen.

I haven’t properly tested myself with lower raid groups, but I’m ok with that. Everyone is excited to get this one.

So far im 2 done, 2 caught. Catching takes ALOT of time though if youre like me, going for those excellent curve throws in the middle right after an attack.

First one we started with 7 accounts, 1 fell out. But that was someones 3rd account and wasnt attacking anyways. So it was just 2 level 40 accounts and them some extras… we had 7 seconds left. My Machamps all have back problems after that.

Im a bit dissapointed by the amount of people raiding. I was excpecting more. Hopefully ill get a good 1 soon. Want to max atleast 1 of these just cause it looks pretty awesome.

About this: i know in game it just shows up as T5, cause theres nothing higher. But they actually gave it T6 stats. Hence why its so hard to take down.

Done 2 Darkrai raids, captured both of them.

Done 8 raids, all were trash but at least I have like 104 candies now
Darkrai is quite tought to fight, 4-manning Focus Blast with 35 seconds to spare twice was quite surprising, thank god we didnt get Shadow Ball that time

Did 9 since it came out (five on Thursday and four more on Saturday). Largest group was 20, smallest was 7. All 9 were wins. I had one account in each hand, giving me 18 possible captures. Lost 3 on Thursday, while I was still getting acquainted with it and trying different approaches. It’s reminiscent of Kyogre, with the side-to-side shuffle and the tendency to linger on the side. I only lost one of 8 yesterday.

As others have noted, it’s a bugger to catch; and although I’ve worked out a pretty effective approach, I expect there are better ones. Lowest CP for me so far has been 2068, and highest (final raid last night) was 2129 (a sweet 98 IV).

I like the boss and just wish it would be around for more than a couple of weeks. I’m sure it will make a return, though.

Ive got 2048 (the worst one possible) twice in a row, Ive decided to keep him the second time in fear that he would return

Sounds like we’re all a bit annoyed Darkrai moves side to side like the Space Whale.
Patients is the key waiting for the right moment of being in the middle and attack move.
The frustration faction if your wanting to get onto the next Raid is certainly heightened.

Here’s my 3/4 caught. The one that Ran was in between the 2 poor ones. Hopefully I can do better than the 93% before it’s gone. Also not real happy that it doesn’t get a full 4 weeks to chasie down that good one. 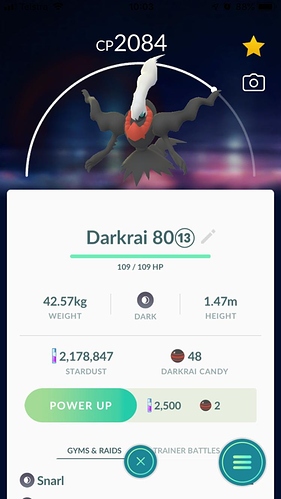 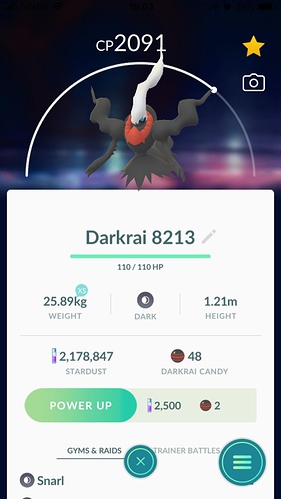 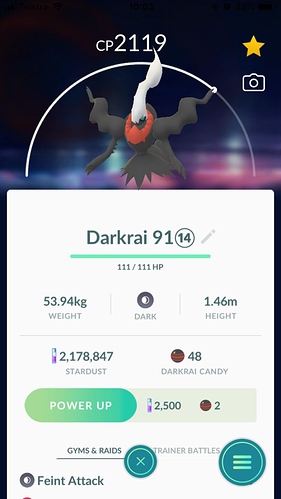 I’ve done 5 raids and failed to catch it once

You having trouble landing Great or Excellent throws?
Or having trouble just landing a throw with the way it moves.
Or is it just being an Ahole and breaking out all the time?

I should have worded that better. I’m 4/5 on catching it. It only ran away once.

My screen shot above I’ve typed 91 instead of 93 which is what it is.
I’ll correct that later tonight at work as I’ve got an Ex Raid invite to go to before work. Can’t do my own Ex I got due to unsuitable time.

I had to give away my first ever EX-Raid today because I had to work.

Did 4 raids so far and caught 3, patience is the key on catching Darkrai as everyone here pointed out it likes to move left and right and likes to attack from the side.

6 out of 6, and the previous two both had Shadow Ball in the Raid. Going against Shadow Ball is definitely the hardest as not a single counter one can use against Darkrai is effective in resisting Shadow Ball. I did have to rejoin the lobby, but with 9-11 people in each raid, Poliwrath with Dynamic Punch actually did a fair job.

12/13 with the best being 2103 CP.
Hopefully raid hour will bring me a good one tonight. The pressure is kinda high since you cant lucky trade this one…

I’m 5/6 atm with a best of 93%
It’s started to warm up here recently. To hot for phones in a car with non working Aircon to get one in today on way to work. Supposed to cool down for the weekend. That will be the time I have to hit a few and get the Raid counts up on our 3x Ex Gyms.
Here’s the last 2 catches. 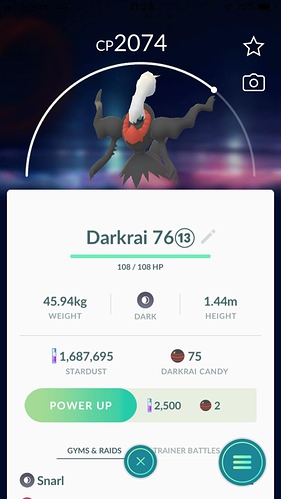