One downside to the guaranteed 7th day Pokestop spin, and the increase in availability, is that most of us will now have evolved most or all the Pokemon requiring items (I completed today with my second sun stone). I’m sure many of us now have the following situation: 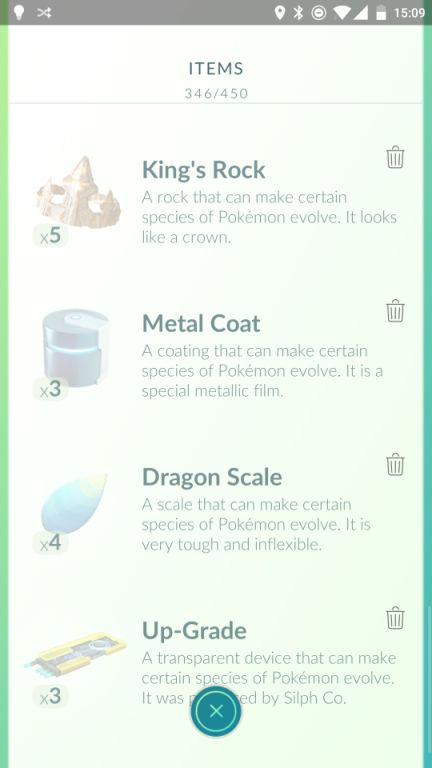 So the big question is (for those of us who’ve not played the Nintendo games) which items should we keep and which are no longer required unless we want to evolve another Gen2 pokemon ?

There is nothing to prepare for Gen 3 - no new evolutions stem from the current mons. There are only just a couple of new baby Pokemon. Gen 4 on the other hand… there’s quite a lot there, but that won’t be for a very long time I imagine.

In the Nintendo Games apart from the sunstone no further Pokémon can evolve with these evolution items. There is no “special” evolution Pokémon in Gen 3; there will most likely be new evolution items introduced for Gen 4 though.
So if you have all the evolutions you want, you can safely throw everything out.

i havent played any of the previous games either! this is good to know =)

If I’m not mistaken, none of these evolution items are used in Gen 3 and 4, just in 5 and onwards. However, there are some split/weird evolutions in Gen 3 that could be handled by evo items.

Well, I have a little experience in Pokemon overall, and as far as I know, Wurmple or Nincada don’t need evolution items to evolve. The Wurmple’s evolution depends on its personality value (yes, in main games Pokemon have personalities!), and when Nincada evolves into Ninjask, you might have an empty slot in your team and an extra Poke Ball. If so, you get Shedinja in addition.
But speaking about evolution items and stones, there’s a big difference between them, although it’s not implemented into Pokemon GO. Firstly, evolution items are given to Pokemon, and allow them to evolve while leveled up or traded. Evolution stones are less complicated - you just use them on Pokemon, no matter what level they are, and then they evolve. Even if only Sun Stone is used in later gens, there are more evolution items and stones than you can imagine. Unfortunately, not every stone (for now) is used. These stones are: Fire Stone (e.g. Vulpix into Ninetales), Water Stone (e.g. Shellder into Cloyster), Thunder Stone (e.g. Pikachu into Raichu), Leaf Stone (e.g. Gloom into Vileplume), Moon Stone (e.g. Clefairy into Clefable). But we might see them in future with releases of later gens.

They have made so many changes (like the personalities), and I think they don’t think to do it this way…

So the way the original games have worked are good line to think about posibilities, but there are no general relation between them.

Even if personalities won’t make it to GO, it’ll be most likely based on other random value, like with evolving Eevee into original Eeveelution trio, or based on IVs. There is no way of implementing evolution itmes for Wurmple, because Pokemon Company will never allow that.

The more they will complicate the system with more posible outcomes, the more posible errors will appear, the more injustice the players will notice in the moment they receive their evolutions…
I like more that I have the same chances to get a good mon as my opponent, and not depend so much on the luck.