New quest system, story mode, and minigames along with more interactions of friends could fix this. But for the issue of cloning legendaries, a person needs more than one because of how thrrr is no IV up.

K, will tell you when I release it. Takes a month to finish with all the people that are in it and finally I am finishing it. Will have a poll in the topic so you guys can join.

Sometimes I wish for niantic to turn all clones to dittos😓

@5GodLink I don’t get why my comments are bad??? Unless you meant for all of us???

The way we power up through candy would rely more on Rare candy, rather capturing.

Also, @Gary_oak and @Law2010 check out this topic, it was locked but is very detailed on A “actual end game” : Single Player Endgame : Gym Challenges

ill see if i can get this unlocked.

Thats not what he is saying, what he means I think is that the first post of yours in his topic was negative.

Replying to me? Ask @5GodLink. He even has a topic called " Ask 5God" where you can ask him something.

Like we said…
It’s too late to undo clones…
@5GodLink

I don’t get what I did wrong??? @5GodLink and @Pokemon

I never said you did anything wrong. Miscommunication.

It is to late, unless Niantic makes it so all your legendaries get deleted (for a specie) unless you keep just one.

You did nothing wrong 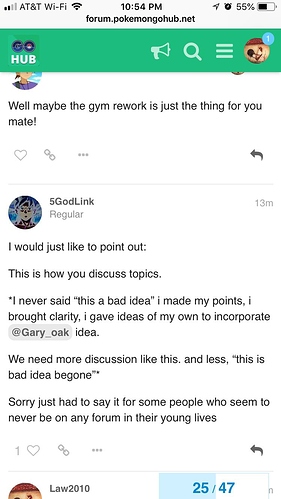 Me not sure what this meant???