Interesting choice do you have any reasons why

I made most the ingame challenges and won majority of them.

Brought most the discussion to the forum also.

Well respect among all forumers on here without any superior title.

Very active if i choose to be.

Free shiny charm for all.

If I understand well @Cup asks for HOW the Champion has to be, not WHO it is…

And for me no stadistic will show the winner, it’s more a question of quality than quantity. Not even the “likes” will work, as there are many ways to manipulate.

I vote for I don’t think we need one.

I see you more as a Professor, with your knowledge or pokemon and stats.

What criteria would define this champion? Highest number of shinies? Of field research tasks completed? Most stardust? Most gold gym badges? Highest XP? Most in-game best friends? Most topics begun here? Topic with the most replies? Reply with the most likes? Longest time without a suspension or censure? Most Pokemon conventions attended?

Should there be some kind of prize or privilege to accompany the title? A throne or scepter? A cameo role on the first G.o.T. spinoff series? A federal indictment and a lucrative tell-all book deal?

I had no idea we were in competition here in the first place. Should we have some kind of formal contest or tournament to determine a champ? 3-league PvP playoffs? A Raid Blitz event? Or how about a simple UFC-style octagon showdown?

I beg your forgiveness for over-thinking this, but I’m pretty thoroughly confused by the whole concept…

I think @5GodLink should write a 500 word essay on why he should be crowned “GoHub Champion”.

all started cause discord has titles for staff; 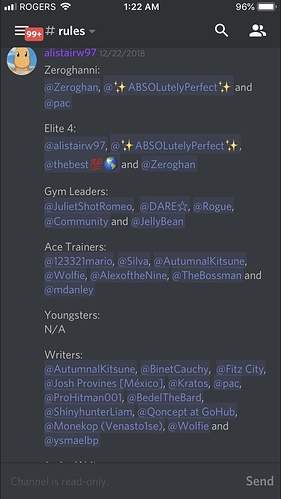