@JimDaRaider no.
@Kevin260709 it isn’t possible to get perma banned. He got suspended and I have proof.

Termination of your account. But thats pretty much the same thing.

First ninatic scares you with termination, then when you try again you get suspension. Which i believe lasts 90 days. This was before the warnings, could of changed.

He is suspended, and most likely will be back late december/ early january.

He was making big bank off Mewtwo. I knew this would happen. Anyone who doesn’t believe in black market is crazy.

?
Yes, pretty sure what you mean. And I think he got suspended for 90 days 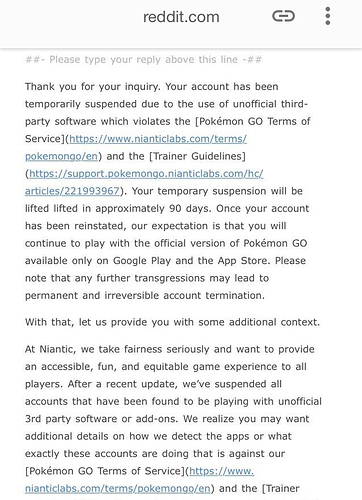 That is beyond sucks

Its a shame that Niantic is this kind
Of course, a permaban on first accusation wouldnt be fair, but having cheaters do absurd things to even get the innitial warning is a bit too much imo
Their 3 strike policy doesnt even end with a permaban and the strikes have such a long period bewteen them

I’m 6/7 on catching Mewtwo so far. Not that hard to do it on your own.

What is the point if you don’t catch it yourself. The raid I went to today was a bunch of dads with thier kids. That was cool. Usually when we raid, my son is the only kid there.

Actually their strike policy is a legit lie. You get suspended either 1st or dont even recieve a 2nd. No perma bans. Just long waits.

i am telling you. lol…

What have you done

He can’t tell you or he might get banned here.

I dont think you can get banned for that, unless you directly support/promote cheating tbh