An Idea To Solve Spoofers/Hackers

As All Of You Know, Spoofing/Botting/Hacking Is One Of The Largest Issues In The Game And Many People Just Want All Of Them To Be Banned. I Have In Idea That Will Stop Niantic From Losing A Lot Of Players:

Niantic Should Open Up One Of Their Private Servers And Push All Known Spoofers Onto It. This Allows All Of Us To Play The Game, Without Either Side Ever Needing To Interact. TBH, I Don’t Care About The Hackers So They Can Go.

What Do You Think? Is It Worth It, Or Should They Just All Go?

That’s would be nifty, let them spoof to their heart’s content while not impacting legit players.
I’m not sure it is as big an issue as prior to the gym rework though & in some cases people appreciate the “air support” during raids.
Personally, I’m not fussed by spoofers, hackers however are a different kettle of kittens…

How to deal with hackers Support

In my opinion, Niantic may set a code number on every account. Whenever you login your account, you are required to enter the code. The code will be sent to players through gmail or PTC (I don't know how it works) and display on players setting screen inside Pokemon GO.

Same for me. I really like the help in my raids but many dislike them being there. I have major issues with Hackers, Seeing how my PTC account was hacked twice. Hopefully Niantic looks into them and (ultimately) can help me get all my stuff back.

Stop this stupidity of regional pokemon. The idea is that you catch them all.

Get much much more pokemon in rural areas. Niantic won’t believe this, but not everyone lives in a US / European City.

That will solve a lot. No coding required.

Great, But is that a real permanent solution? People are always going to want to cheat in games, and just upping the spawns (IMO) won’t help much.

@PeterParker7 Do you know what are the hackers target at? Your idea could only improve the situation of spoofing. It doesn’t help preventing hacking others’ account at all.

Push All Known Spoofers Onto It

A large demographic of spoofers are unknown, so yeah…good luck with this.

It’s an idea, and it’s not like Niantic would ever Try this. Merely my suggestion on how to help.

On why couldn’t ‘setting codes and sending it to players’ gmail account’ is done by mechanic (not manpower)? It’s just like the code is set according to your account starting time.

Understand your point. The system isn’t & most likely will never be perfect. There will always be people who will circumvent any restrictions put in place. The new update looks like it is moving the game in the right direction though with regard to recognition of 3rd party apps that aid spoofers.
Plus who knows, the international community listen to what comes from this forum (the APK mines really only come from here & the Silph Road or reddit) & any of the ideas may turn out to be key in getting the ball rolling. Let’s see how we can help add to them. 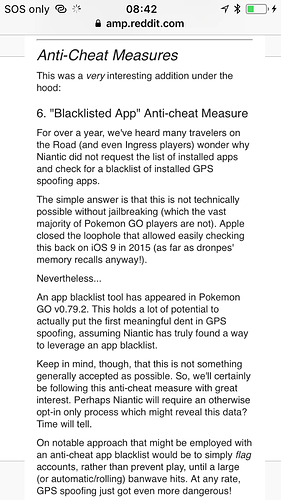 JoshHack:
According to Silph Road, Niantic have added something shady to the code. This thing is specifically designed to eliminate Android Spoofing, But doesn’t help IOS As Well. It can work out if you’ve downloaded any hacking apps before by using some unknown means. Isn’t that illegal? Invading your privacy and looking what apps you’ve installed?

Yoshi:
Of course it’s illegal. How can Niantic ensure our information won’t be leaked! (It’s likely a stalker’s behavior!) For those players who stopped spoofing but forgot to uninstall the app they might also be banned. Idk how many ‘% of players’ will be banned after this ban wave. Niantic always let us down! Is eliminating players that essential?!

JoshHack:
Yep! It’s just that I know not many people realised that this was in the update and I wanted to bring it to light. Also @Yoshi unless Niantic Get express permission from Apple to add that in completely it would 100% be illegal.

Yoshi:
Niantic is going to bear the risk of legal responsibility and receiving complaints from playerbase!

JoshHack:
Complaints in one thing, this would be utter anarchy if they add this. If they do add this, I might not play as they can literally check up on anything your phone is doing, what apps it has, etc:

I’m wondering, whats the problem about spoofing, other than few idiots taking down other gyms?
You cant lose a Pokémon because someone else caught it, and they can be a big help in raids

I’m trying to explain the same for a long time now, but they don’t want to hear it. It’s against the rules, and so nobody has to do it…

That’s why i’m proposing a solution which allows everyone to play without disturbing eachother.

I know, but too much times I have to read the comments from the other group, so I have decided to calm down and shut my mouth…

But then everybody would spoof
Be it just to play with a friend that spoofs, to get the regionals, or just to be completely free for flying to the other side of the planet for a 100IV Heracross

Then it loses the point
I wouldnt care much, but a lot of people would bitch about others having unfair advantage
So everybody would start spoofing