Who's got farfetch'd & Kangaskhan?

Hahaha, really very nice fotos, I would like to make equals… 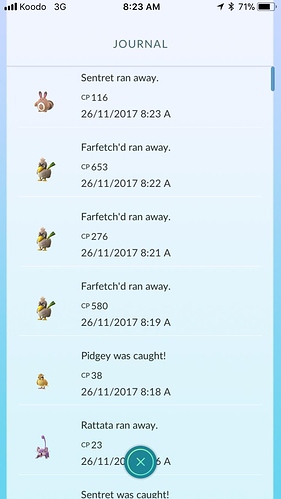 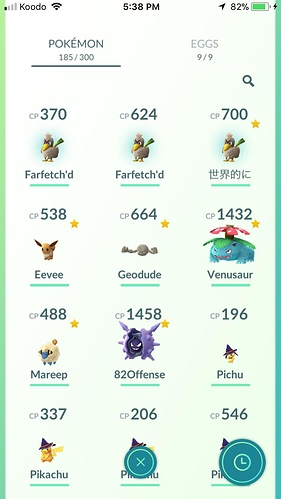 Huuh, three of them run away? not one of mines have done this. Another question is why one of your Farfetch’d has a chinese name??? Do you use fake GPS? Or do you running around the world in the same day?

No, it’s named worldwide in Japanese (for symbolism I guess), I would never use a fake GPS. I’m pretty sure it would still be in English anyway, since that’s my game’s language setting. I was also catching the Farfetch’d off an incense in the car, so I think I got too far away from them, I’ve noticed the go plus does the same thing.

Mmmh, , well like allways, in case insecurity, the reason is in hand of the defender, but I have never seen a Pokemon in my application with a chinese name…

I renamed it that, it’s not how I caught it.

I FINALLY got mine - a bit annoying at 800 cp flat though - i got the ultimate throw - gr berry with ultraball curveball excellent and it one roll broke free. Caught it 2nd throw no curveball or decent throw …

Disappointed there’s hardly any popping up in my office at work. I get 3-5 spawns every hour and so far only one Bamboo Duck.
Upside is I just finished checking yesterday’s catches and found a 100% in among all the 40-50% ones 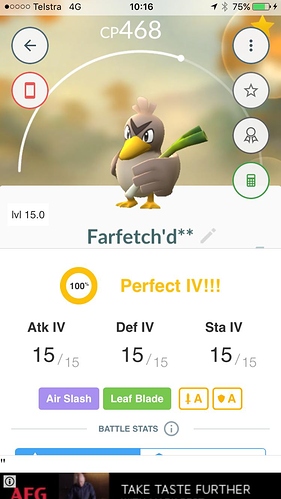 I’ve seen several farfetch’d, but nothing real great. Since it’s worldwide right now, I’ll probably only keep 2-3 of the best. It was fun actually adding another mon to the dex…especially a gen 1 mon. I remember trading for it in the blue game and loved the design since the first time I saw it. 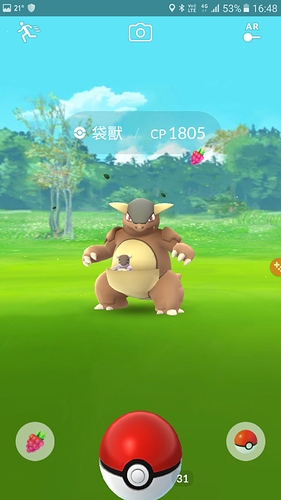 Yep, Farfetch’d is spawning everywhere. They’re spawning outside my house & because the city center is still being lured up they are spawning pretty frequently from lures & normal spawn points… And to top it off, a Dragonite spawned from a lure at my work!!! 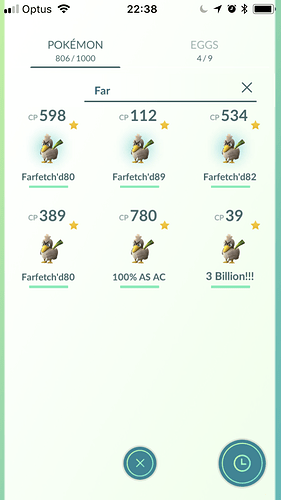 Well I don’t have a kangaskhan, however 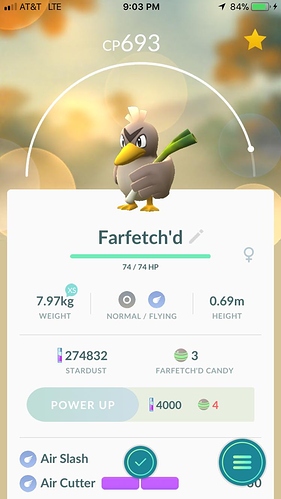 Up to seen 46 caught 40 and sitting on 155 Candy.
Also got another 100% bigger CP than my other thanks to our local Discord group. Was only 4 streets away from my home.
Unlikely to catch any more before the 48hrs ends as my office only gave up 1 for the whole day, and in the first 2hrs today it’s 0.

So how you explain it, without leaving the Rules of Niantic?

@Mapman42 If you cheated to obtain Kangaskhan, I had better present you a saying. 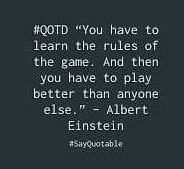 This was posted by another game’s group. When a player was found cheating, he got permanently banned. The moderator posted it to discourage players from using 3rd party apps.

I thought the same, but I was waiting that he answers and gives an inverosimil explanation that I not have thought about…

I didn’t cheat for kanga - when the safari zone event was cancelled everyone across Europe got kanga and unown spawns.

Mmmmh, no, at least in Spain it was not over all the country, bacause where I was all the summer (in Denia), there were no Kangas and no Unowns. And Spain is still part of Europe…
And I don’t say you cheat, but it smells rare…

But don’t worry, what I think about this, doesn’t have to have influence about you or your way of playing. It’s my problem and there’s no need to change my thoughts.