I don’t covet your shiny Espeon . . . but I would love to get one just like it! Is it safe to assume you caught and eevolved it during the Communeevee Day?

Makes me wonder . . . are the shiny variants of CD species limited to their CD? Or will we encounter the occasional shiny Eevee, shiny Dratini, etc. even after their CD has passed? Are there any Niantic insiders on this board (or somebody else who would have a way of actually knowing the answer to that)??

You are still able to find a shiny Eevee (or Larvitar, or Mareep, etc). Everything can be shiny once its shiny variant has been released.

I did catch it as a shiny Eevee during the Community Day, but I evolved it today, because I didn’t want Last Resort on it.

I’m now walking a shiny Eevee to get Umbreon.

Nice coup! My attempt to evolve one of my remaining CD shiny eevees did not meet with the same success. (I had gotten all three of the standard eevolutions with three tries on CD, and hoped the fourth would get one of the two types I hadn’t gotten yet; but my gamble was not as fruitful as yours…)

You can only get espeon and umbreon eith the trick

Doesn’t the trick only work once? I’ve used it once for all 5 already. Had I known about shinies back then, I might have saved the trick until last weekend.

My only shiny Eevee is 45% IV. It can just stay an Eevee.

If I’m right you can do this trick as often as you want to.

Yes, you are right. I did this 10 times after the name trick to build up a set of 6 Espeons and Umbreons.

Dont you have to name it?

Unless you haven’t used it already: No.

Thanks for the info!

Just got shiny Magikarp a week ago
87% IV

Are you gonna evolve it ( when you have the candy obvs) 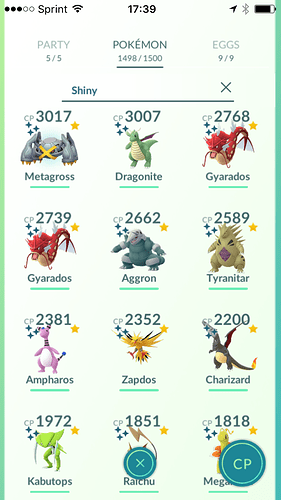