Did two yesterday and three today, hoping to get a better IV one before they leave 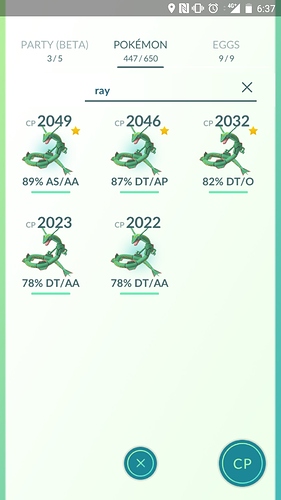 I am still waiting to see another after Saturday’s fail. This weekend maybe…

Haven’t encountered a rayquaza above a 91

I guy I raided with yesterday got a 98% 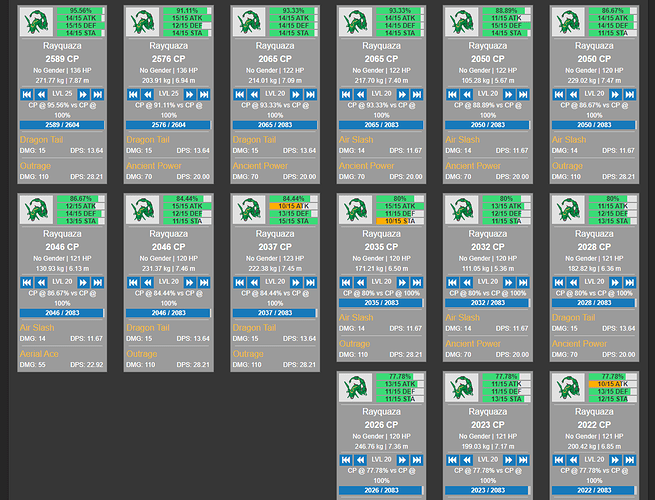 my current lineup. Right now i’m at 16/22 (last one not in SS due to SSsize) with a 96% weatherboosted as best

What app is this?
And does the SS size mean? (unless its some nazi propaganda)

Not an app, it’s a website that requires a login, so most people don’t like it.
Edit: pgnexus.gg

SS = screenshot.
I took a screenshot, My 16th Rayquaza was on the next line which would mean a bigger screenshot and thus less focus… that is all

Its a kinda hack

I still have none…

Just that charged attack…
I already wasted two TMs switching it to Ancient and back to Aerial.

What iv checker do you use? I really like it!

Calcy IV for Android.
It can be a bit tricky to use on large pokemon like raidbosses though, since they often obscure important parts of the screen, like the end dot on the lvl-arch or the CP value. In those cases, I have to either enter the values manually, or rotate/animate the pokemon to allow the tool to make a proper screenshot. But, at least as far as we know, it’s a legal tool since it doesn’t actually access the gamedata, nor connect to Niantics’ servers.

Calcy IV is perfectly safe to use as is Pokeie Genie as they don’t directly access the game code.

The good in Calcy IV: you can even scan your gym badges xD

My son and I got our weather boosted Rayquaza today. He brought his stuffed plush Rayquaza toy today and he caught him on first throw critical catch. I also got him on my 4th or 5th throw. So we will be bringing that toy on our raids from now on.