It took me awhile to find the thread I posted in with Raid progress shortly after Rayquaza has been released. I’ve got a feeling the thread title has been edited as I’m sure it previously had Rayquaza in the title but no longer does.

I’ve started a new dedicated solely for discussion and posting progress of how everyone is going with their Rayquaza Raiding. 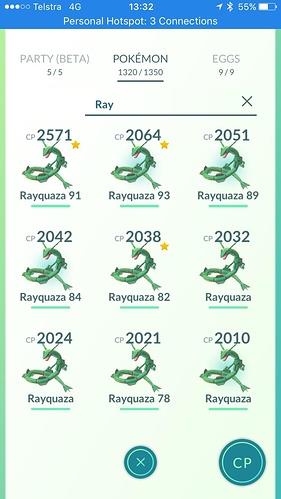 I’m now 15 from 21 Green Dragon Raids and yet to see better than 93% on my own account.
I caught a 98% for the wife 2 days ago and have 91 & 93% on the kids. I’ve only had one good one in the 98% on the kids account run on day 1.
What I’ve found interesting with my own collection is not one of the 15 I’ve caught has an Attack stat of 15. I’ve recently started chucking Pinaps at the very poor CP’s rolling the dice on getting double Candy with 2/2 so far.

I have still seen just 1 rayquaza… i hope they become more common. Are they easy enough to beat?

Yes, I’ve found Rayquaza the easiest Legenday to beat so far.
Unless you’ve got Ice Move Pokemon fully Powered Up and I mean fully Powered up they are too light and cant take much punishment you’ll go through a heap more Pokemon in the battle. The alternative would be very good at dodging but too much of that uses valuable secs.
I can do non weather boosted ones on my own playing the families 4 accounts and have around 70-80sec remaining.
The accounts are L40, L36, L35 and L34.
The best attacker for this is Aggron with Dragon Tail / Stone Edge. My L40 has 3 good ones ranging 2200CP-2800CP.
2 of the other have 2 while the other has 1.
Big CP Golems 2400-2800CP with Rock Throw / Stone Edge are next selection and the game normally picks 1-2 of those.
The rest are topped up with 3000CP+ Tyranitars with Bite / Stone Edge which every account has plenty of.
My L40 normally doesn’t need a second wave but the other 3 do and it calls upon other Golem or Tyranitars.

As I slowly work on adding more Aggrons and Power them up the battles get easier and easier.
The only one I’ve got down to 25sec left was a Weather Boosted one with Outrage as Charge Move. That one hits like a Truck and 3 of the accounts got into the 3rd wave and my L40 used 4 in the second wave. Luckily all have a lot of Golems and Tyranitars.

If all accounts are made up of Aggron they will destroy Rayquaza very quickly.

Finally got myself one with 15 Attack and my best IV of 96%.
Now 3/4 on the Pinap too. With the way this thing repeatedly busts out of Gold Razz Curve Greats I’m getting more and more cynical on how much Berry type doesn’t matter and your catch fate is determined the moment you go to the catch stage.

I got into the city today

and did one rayquaza. It was a really easy defeat but nobody in the whole group caught it. It was really difficult to hit…

Caught my first Rayquaza today. So I’m 1-3 on attempts to catch him. Now my kids can stop making fun of me. They both caught Rayquaza before I did.

Use Dragonites if the set is pure flying, you will thank me later
Also, Ice Types are actually pretty good, doing tons of damage in short ammount of time if you have them powered-up, a lot better than Golem and Aggron, save these for later

Icetypes are great! A week ago it was cold here with alternating snow and drizzle, and since only Gen 3 Pokemon spawned, I took the opportunity to gather dozens of Spheals to upgrade to five Walreins and a couple of Snorunts to get another Glalie, just because they were at that moment the easiest to aquire counters to Rayquaza.

Just did another Rayquaza raid and didn’t catch him. I was using gold raspberries and doing curveballs. So now I am 1-4 on Rayquaza.

I tried that very early on with my own account. I made 2 battle squads for selection.
My Ice types were made up of 3 Articunos and 3 Lapras. Unfortunately they are only L20-25 and while they might have inflicted a bit extra damage they were all defeated quite quickly in comparison to the other 3 family accounts going with auto selections of Aggron, Golem, Tyranitar. Those accounts don’t have enough Ice types to make it work.

I did the same with a heap my Dragonites that are 3000CP to 3100CP with a mix of Outrage, Dragon Claw and Dragon Pulse Charge moves. Bit better result than the Ice experiment but after trying some Raids with a couple of Aggrons I found this was better for not punishing the Revives and Potions as much.

I’m 24 from 33 for Rayquaza after the weekend.
I had a 2071CP run which is 96%, That one also broke the run of 9 in a row caught which is what I was dreading with each consecutive one caught after 5 in a row.
I caught a 100% for the Wife on the second to last ball out of 14, I was getting a bit nervous towards the end as the balls were running out after continually landing Gold Razz Great or Excellent Cuve Balls. That Raid was unusual in that 3 big CP’s (2083, 2071 and 2060) came up at the same time across the 3 Family accounts. All 3 were caught while my 2022CP ran off.
Another point of interest is out of all 24 I still only have the 1 with 15 Attack Stat.

Guys I got air slash/aerial ace on my rayquaza, Should I use a fast & charged tm on it?

You definitely should unless you won’t power it up.

Not if its meant to be a flying type attacker for things like Machamp (or a Roserade raid boss? probably asking too much)

Yeah you could use it as a flying type attacker too

No, catch another one for Dragon type combat, keep this one as a niche flying fighter.